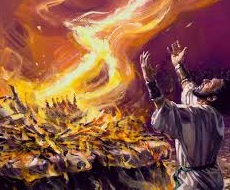 As the children of Israel journeyed through the …wilderness, they became well-acquainted with the manifested presence of Jehovah God. They also became quite experienced at presenting sacrifices to God on the altar at the tabernacle.

There is a direct correlation between the burnt offerings and blood sacrifices continually presented at the tabernacle and the hovering cloud of glory that accompanied them every step of their travels.

The altar was a means to attract God’s forgiveness. When men caught on to the principle of sacrifice, it brought the blessings of the Almighty. What could be used for selfish purposes was instead willingly surrendered as an act of worship.

Healthy sheep that provided wool was placed on the altar. Rather than a source of income, it became a declaration of submission. Well-fed oxen with the potential to be a beast of burden were instead put to death and set afire. The people of Israel understood that God honored such a gift when it was released freely and eagerly.

The Bible shares with us moments when God visibly showed his pleasure in receiving the offering. These were specific occasions that his fiery display consumed the contents of the altar. I want to focus on three particular instances where God sent down fire from heaven.

THE ALTAR OF REPENTANCE

King David made a serious mistake. In a moment of pride, he had his troops numbered. This doesn’t seem to be such a big deal, but evidently it was significant to God. Scripture makes clear: “Satan provoked David to number Israel” (I Chronicles 21:1).

What makes this decision even more tragic is how it affected so many people. His disobedience brought a devastating plague, claiming the lives of thousands.

David felt responsible for the damage. Desperate to end the destruction, he sought to use Oman’s threshing floor for sacrifice. Oman graciously offered not only his threshing floor but materials and animals as well. The king refused to accept the generous gesture.

He knew that what was offered to God couldn’t be without cost. He said, “I will surely buy it of thee at a price: neither will I offer burnt offerings unto the Lord my God of that which doth cost me nothing” (II Samuel 24:24).

God responded favorably to David’s altar. He honored the repentance of the flawed king. I Chronicles 21:26 tells us, ‘And David built there an altar unto the Lord, and offered burnt offerings and peace offerings, and called upon the Lord; and he answered him from heaven by fire upon the altar of burnt offering?’

Even though David’s previous actions had been deplorable, God was eager to forgive him and restore him. His threshing-floor altar made the difference.

God responds when we sincerely want to make things right with him. God blesses when people come to him in the right attitude. God gives forgiveness when someone finds an altar and sincerely repents.

THE ALTAR OF DEDICATION

Solomon presented an inordinate amount of sacrificial offerings at the dedication of his glorious temple. Scripture gives us a staggering description of how much blood flowed during the momentous event.

As he had responded in the days of David, God gave a very visible display of his approval of Solomon’s dedication. Notice what Scripture says.

God will send his glory and his anointing when we go above and beyond the norm in dedication. God will send the fire when we present the kind of sacrifice that gets his attention. God will make his presence known when our altars match his expectations.

We used to hear a lot of preaching about consecration. There was a day that it was common to hear the old-timers admonish the church toward prayer and fasting. In times past, preachers made it very clear what had to be “laid down” to receive the favor of God.

Not so much anymore. We want the easy way. We want motivational speeches with a spiritual flavor and a verse of scripture thrown in here and there for good measure.

The fact is: God is still impressed by sacrifice! There are some blessings you will never receive until you, personally, pray them down.

When someone is greatly used of God, there has been sacrificing behind the scenes. When a minister preaches a moving message, that doesn’t happen by sheer talent, but is usually a result of intense fasting and prayer. When an anointed singer touches you deeply, and something resonates within you, this is a result of the altar.

THE ALTAR OF STANDING FOR TRUTH

In the reign of Ahab, God’s chosen people strayed from his law. Queen Jezebel influenced them to worship idols.

God sent a prophet named Elijah to the wayward nation. He called for the people to gather at Mount Carmel. There he preached. He pled with Israel to cease living torn between serving the Lord or serving Baal.

Initially, the crowd seemed to be a little hesitant about supporting Elijah. You will not have the world on your side when you do what is right. Don’t ever expect the majority to appreciate your stand when you are committed to living by the word of God.

Elijah recommended a contest of altars. The prophets of Baal would offer sacrifices to their god. Then Elijah would sacrifice to the God of Israel. All agreed that the altar that was visited by fire from heaven would decide which god was worshiped.

The Baal worshipers went first. They engaged in all types of theatrics. It was quite a show. Scripture explains; “And they cried aloud, and cut themselves after their manner with knives and lancets, till the blood gushed out upon them.” (I Kings 18:28).

Their hysterical behavior was to no avail. Their god failed to answer.

“And Elijah said unto all the people, Come near unto me. And all the people came near unto him. And he repaired the altar of the Lord that was broken down” (v. 32). Quite possibly; this altar had gone unused for some time for it to have been in a state of disrepair.

The prophet had servants pour buckets of water over the sacrifice and over the wood. He had them do it a second time. Then a third. Until finally, water filled the ditches around the altar.

He was determined to leave no doubt in the minds of the spectators that God had surely visited his people. He purposed that everyone gathered there, at the end of the day, would give God all the glory.

“And it came to pass at the time of the offering of the evening sacrifice, that Elijah the prophet came near, and said, Lord God of Abraham, Isaac, and of Israel, let it be known this day that thou art God in Israel, and that I am thy servant, and that I have done all these things at thy word” (I Kings 18:36).

“Then the fire of the Lord fell, and consumed the burnt sacrifice, and the wood, and the stones, and the dust, and licked up the water that was in the trench. And when all the people saw it, they fell on their faces: and they said, The Lord, he is the God; the Lord, he is the God” (vs. 38-39). Elijah held nothing in reserve -nothing in a “just in case He doesn’t” pile. He knew that the true God of Israel would honor his stand for truth.

God will bless people for standing up for truth! God will bless the preacher who will preach Apostolic doctrine whether it is popular or not! God will stand behind the man or woman who will have courage to believe the Word instead of the world!