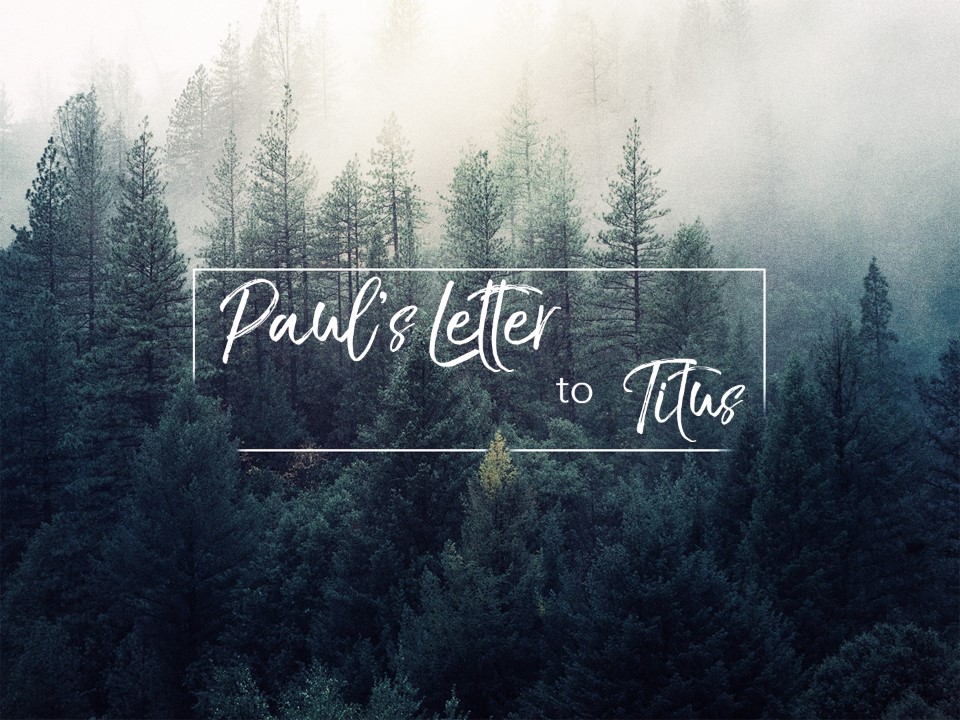 A. TITUS:
Titus was one of Paul’s converts for Paul addressed him as being his “own son after the common faith” (Titus 1:4). Titus became one of Paul’s trusted and devoted companions. He was a fearful worker for the Lord.
By nationality, he was a Greek (Galatians 2:3) and had been converted to Christ out of heathenism. Paul had assigned to him some important matters dealing with the Corinthian church in which Titus had been successful. Later Paul left him on the island of Crete to organize the church there.
It would seem that Paul took Titus with him to Jerusalem at the first Church Council when the matter of circumcision for the Gentiles was being settled. Apparently Titus was a test case. Paul resisted having Titus circumcised and as far as we know, Titus was never circumcised. On the other hand, Timothy who was half Jew was circumcised because of his testimony.

B. THE ISLAND OF CRETE:
Crete is the largest island in the Mediterranean Sea. It lies southeast of Greece between the Aegean and the Mediterranean seas. It was a mountainous island, about 150 miles long and from 7 to 30 miles wide. It was the home of ancient civilization. The Cretans were daring sailors and famous bowmen but were notorious for their bad moral practices.
There is no definite record of the beginning of the church in Crete. However, there were Cretans present at Jerusalem on the Day of Pentecost (Acts 2:11). In all probability these Cretans who returned home carried the gospel with them and established the Cretan churches. These churches in Crete had allowed the moral conditions of the island to creep in and therefore Titus had much to do.

C. PAUL’S LETTER TO TITUS:
The epistle to Titus was written about the same time as the first epistle to Timothy. The contents are quite similar. Timothy was in Ephesus obeying the instructions of Paul as Titus was in Greece. Both men were appointed elders and setting their churches in order.
Apparently after Paul’s first imprisonment, he visited Crete being accompanied by Titus and left Titus there. This epistle was written between Paul’s first and second imprisonment, possibly in 63 AD.
The epistle placed in Titus’ hand written instructions and authority for his work in the churches on the island. It also gave Titus a personal message and information concerning Paul’s plans to spend the winter at Nicopolis (Titus 3:12). He notified Titus that he was sending a replacement and desired Titus to join him at Nicopolis.

D. SALUTATION: (Titus 1:1-4).
In the salutation, there are two or three statements that should be noted. Paul named himself the “slave of God.” He was first God’s slave and then God’s apostle. Paul recognized that God owned him and that he had no say in God’s will in his life. It was only for him to obey.
Paul connected the hope of eternal life with the acknowledging of the truth and the life of godliness. This hope of eternal life is for God’s elect and had been promised before the ages of time began. Another matter that should not be passed over is the clause “God cannot lie.” He is Truth! There is no error in Him! Although God can do all things, yet there is one thing that He cannot do – He cannot lie!

E. SETTING THE CHURCHES IN ORDER: (Titus 1:5-9).
In setting the churches in order, the main work for Titus was ordaining elders in each city. These were actually pastors and the word “bishop” was also used. The qualifications for them are listed here and are similar to the qualifications listed by Paul to Timothy.
These ministers must have a good reputation; living with only one wife and having faithful children whom are not wild or disobedient to their parents. The elders must not be proud, impatient, drunkards, fighters, nor greedy. They must enjoy having guests in their homes and be sensitive men who are clean minded. They must believe the truth and understand the doctrine so that they can teach others and show those who disagree with them where they are wrong.

F. DEALING WITH FALSE TEACHERS: (Titus 1:6-16).
In these churches there were false teachers who had to be stopped. They were mainly Judaisers who were teaching for monetary gain. The phrase “filthy lucre’s sake” simply means “greedy for money.” Paul quoted from the Cretan poet, Epimenides, in verse 12. In the Living New Testament this quotation is given thus: “Ye men of Crete are all liars. They are like lazy animals living only to satisfy their stomachs.”
Paul said that these false teachers had already lead whole families away from the grace of God and they had to be rebuked sharply.
A person who is pure of heart sees purity in everything. A person whose heart is evil finds evil in everything (verse 15). In the last verse of this chapter, Paul declared that a person is known by his life. One may profess to know God, but if his life is rotten, it is evident that they do not know God.

G. SOUND DOCTRINE: (TITUS 2:1-10).
Paul instructed Titus to teach sound doctrine. This is wholesome teaching dealing with right living for Christians. Sometimes there are those who claim that doctrine is not important, but doctrine deals with every aspect of Christian living. Here Paul gives instructions to several groups:
1. Older Men. They were to be serious, sensible, believing the truth and living a life of love and patience.
2. Older Women. They were to be quiet, respectful, not slanderous, gossips nor heavy drinkers. They were to be teachers of that which is right.
3. Young Women. The older women were to teach the young women to live quietly, to love their husbands, to love their children, to be sensible, clean minded and spend their time in their homes, to be kind and obedient to their husbands.
4. Young Men. Young men were to be self-disciplined and to take life seriously.
5. Slaves. Slaves were to obey their masters and do their best to satisfy them. They were not to talk back or steal but show themselves trustworthy.

H. THE BLESSED HOPE: (Titus 2:11-14).
The gospel of salvation is now being offered to everyone. With this comes the realization that men would turn from godless living and sinful pleasures and to live godly in this present world. This same gospel which brings salvation and teaches godly living also teaches that we should be looking for that blessed hope. This blessed hope is the appearing of the Great God and our Savior. This teaches us that Jesus Christ is both the Great God and Savior. It also teaches that the hope of the church is the return of Jesus for His saints and the purpose of His dying for us was that He might redeem us from all sin.

I. PRACTICAL INSTRUCTIONS: (Titus 2:15; 3:1-11).
Titus was to teach the church to be obedient to civil authorities. Citizens of heaven should be good citizens here on earth. Christians were not to slander anyone. They were not to be quarrelsome but to be gentle to all men. Titus was to avoid unprofitable arguments and controversial ideas, which would only cause division. A heretic was to be admonished twice. After the second admonition, he was to be rejected and Titus was instructed to have nothing more to do with him.
The statement in verse 5 is very important. We are not saved by our works or righteousness but by His mercy, by the cleansing bath of the new birth and indwelling of the Holy Spirit. Emphasis should be placed upon the truth expressed here.

J. CLOSING: (Titus 3:12-15).
Paul gave some final instructions to Titus. He stated that he would be sending either Artemas or Tychicus to Crete to take Titus’ place. Titus was then to join Paul at Nicopolis. When he came to Nicopolis, he was to bring Zenus and Apollos. We do not know too much about Zenas, but it would seem that he would be the only Christian lawyer mentioned in the Bible. Titus was given the final instructions to help Zenus and Apollos in every way he could and this example would teach the Christians to help those who need assistance.

SELF HELP TEST SELF HELP TEST
A. Write a description of the island of Crete.
B. What nationality was Titus?
C. Why did Paul take Titus to Jerusalem?
D. Why was Titus never circumcised?
E. What instructions were given to each of the following: 1. Older Men? 2. Older Women? 3. Young Men? 4. Young Women? 5. Slaves?
F. What is our “blessed hope?”
G. In your own words, explain Titus 1:12.