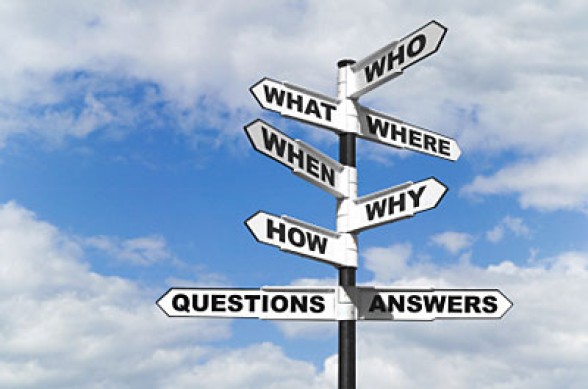 Recently, a terrorist killed 49 people at an Orlando nightclub, a Cincinnati zookeeper shot a gorilla to save a 3-year-old, and a 2-year-old was snatched by an alligator at Disney World.

The blogosphere was filled with outcry on all three events.

Terrorist homophobe or martyr? Life of a child or an endangered gorilla? Negligent theme park or parents?

Jesus doesn’t have opinions. He has answers.

As people embrace Jesus’ answers, the world will march towards its cure, one life at a time.

Our world needs clarity right now, and the best source is men and women who love their lost neighbors enough to learn the answers to their questions and lead them to the Lord.

Where will these neighbor-loving answer-givers come from? Only one source: the local church. The people who attend church on Sundays must become the people who can answer questions on Mondays.

Led by pastors and church leaders, what our world needs today is 1 Peter 3:15 people—people who are prepared to give answers.

“But sanctify the Lord God in your hearts. Always be ready to give an answer to every man who asks you for a reason for the hope that is in you, with gentleness and fear”(1 Pet. 3:15, MEV).

Peter knew that our mental life—our understanding of the physical and spiritual world—is the most important thing about us.

Some would disagree. “No, first we need justice to right the world’s inequities.” Or, “We need compassion to bring cups of cold water to those in need.” Or, “What everyone really needs is at least one sincere friend.” But justice is temporary. So is thirst. In light of eternity, so is friendship. Supplying these is treating symptoms. A painkiller masks pain, but it doesn’t take it away.

To heal people we must operate on their source of suffering—and that’s the human heart and mind.

How to Create a Church Full of Question-Answerers

Six months after we launched New Song, I did a series on questions pre-Christians ask. Forty people came to Christ.

I repeated that series, with different titles, every few years. Every time, large numbers of pre-Christians attended, and large numbers trusted Jesus.

Doing a series like this not only helped lost people find their Savior, it equipped found people with answers for their neighbors.

Because of the changed lives we were seeing, in 2006 I wrote The God Questions based on these answers. Outreach, Inc., developed a church-wide campaign around it.

2,000 churches have used the material to:

1. Equip pastors. In my experience, the best way for a pastor to learn the questions pre-Christians ask is to preach a series on those questions.

2. Equip church members. The best way for church members to learn the answers is hear their pastor preach on them on Sunday and then go home and read the answers from The God Questions during the rest of the week.

3. Lead people to Christ. And the best way for a pre-Christian to get answers is to be invited to a church that is holding a God Questions campaign.

Here are the 6 main questions people ask and the short answer to each question:

1. Is God real? The simple answer to this is “Yes, and He’s given pointers to His existence all over the universe.”

Psalm 19:1 says, The heavens declare the glory of God” (MEV). Ecclesiastes 3:11 says, “He has also set eternity in the human heart” (NIV). The cosmological, teleological, ontological and moral arguments all point to the existence of God. So does the life and witness of Jesus. So does the personal testimony of billions of Christians.

Surprisingly, people in our day and age haven’t heard these things. Giving them these answers removes one stumbling point from them trusting their lives to the Lord.

2. Is the Bible true? Most people in our society have heard a lot about the Bible, but they’ve rarely heard it defended by an informed and gentle source. Few of our neighbors have had a friend walk them through the Bible’s claims for itself or how it was composed, or its historical, prophetical, archeological or trans missional accuracy.

They don’t know about the Massoretes or the Talmudim and how carefully both groups transcribed the pages of the Old Testament to ensure no errors crept in. They don’t know that we have nearly 25,000 ancient manuscripts of the New Testament that enable us to reconstruct the original documents more reliably than the next ten or twenty ancient books put together.

3. What about other religions? Religious tolerance has become a cardinal virtue in our day. Common consensus is that all religions basically lead to the same place. One of my favorite chapters in The God Questions is where we compare the top ten religious systems to each other. They all espouse different gods, different paths to him, and different after-lives. When a person gets through looking at these together, their only conclusion is, “These are all so different, they could all be wrong, but only one of them could be right.”

Our world needs this information! And when we give it to them, hearts soften, because minds are opened.

4. The problem of suffering – The number one question everyone has is, “If God is so good, strong and caring, and why is there so much suffering in this world?” Understanding the nature of free will doesn’t cure the pain of suffering, but it does provide a moment of intellectual satisfaction, and opens the possibility of trusting God.

That God didn’t author evil, doesn’t like or approve of evil, and is working as lovingly and diligently as possible to restore us to the Paradise He created in the beginning is a good answer.

5. Which is right: evolution or creation? Western classrooms teach evolution with such security that it is hard for anyone to raise their hand with confidence and say, “Excuse me, there is a God who created all this!” Christians feel unequipped to explain the scientific accuracy behind the Genesis 1 account of creation.

What if they could know for certain that the earth was created by an omnipotent being? That Einstein’s theory of relativity requires that our universe had a beginning? That the Big Bang theory requires that the beginning was created by something outside our four-dimensional universe? That quantum mechanics and string theory point to dimensions outside ours, from which such a Creator could come? Imagine people understanding the impossibility of non-theistic evolution because of recent discoveries in microbiology?

In the beginning God created the heavens and the earth is more than religious poetry. It’s scientifically plausible, accurate, and trustworthy. Helping neighbors to understand this empowers them to make an intellectually credible response to the God who is calling them to follow Him.

6. What happens when I die? The Bible’s teachings on eschatology is the least-understood doctrine in most churches.

The fact that right now there is a temporary Heaven and Hades and that one day there will be an eternal Hell, and that believers will live not in an ethereal place called “Heaven,” but in a physical place called “The New Earth.”

Because of our desire for tolerance, we rarely grapple with the reality of the permanent torment of Hell; or that of all the Bible’s teachers, it was Jesus who had the most to say about it.

In theology class, eschatology was that last doctrine to be covered each semester. If a professor ran short of time, his students rarely learned about life on the New Earth. Our world doesn’t understand the new heavens and the new earth because many preachers don’t understand them. Life in eternity needs to be preached, understood and shared with our neighbors!

Passive agnosticism may be the largest religion of our day. Knowing about the incredible opportunities of Heaven and the unspeakable horrors of Hell is motivating and sobering and pushes people out of passive mode into making a decision.

Imagine What Could Happen

Our world needs 1 Peter 3:15 people, who can give true and clear answers with gentleness and reverence.

I am praying that pastors across our country will equip their people and reach out to their neighbors with answers to the truth that will set them free. I hope you will join us.

The above article, “6 Key Questions Non-Believers May Ask About God During Your Home Bible Study” was written by Hal Seed. The article was excerpted from www.pastormentor.com web site.  June 2016.