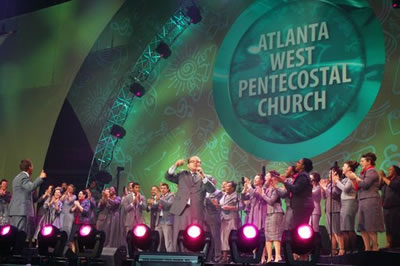 I’m always a bit frustrated when I see articles like this one from Cathy Lynn Grossman on the Religion News Service, entitled “Many church choirs are dying. Here’s why. “They never tell the whole story. It’s accurate that many churches have traded the traditional choir for a more contemporary ensemble in their services. I don’t think we can argue with that. But what the article doesn’t say is that there are many churches in which the choral art still grows and flourishes. Beyond that, there is no real discussion of what is being forfeited in this installment of Christian culture’s relentless pursuit of what is trendy.

There is much in the article that could be addressed, but instead of offering a blow-by-blow rebuttal, I’d rather take a minute to discuss the unique presence good choral music brings into corporate worship.

There’s no way John would make it onto any praise team anywhere. He’s not cool enough, young enough, or stylish enough, and his tendency toward performance anxiety doesn’t help, either. But, you know what? John obviously loves to sing, and I’m guessing his service in the Chancel Choir at First United Methodist Church is diligent and earnest. We already know he can match pitch (and sing in diverse styles), and having sought out the services of Mrs. Reva Cooper Unsicker, he must be quite teachable. For those qualities, he would be more than welcome in most church choirs. He could sing in my choir any day, although I probably wouldn’t let him do “Amora” too, okay?

Seriously, there seems to be a trend in contemporary worship culture that says unless you look a certain way, dress a certain way, have the right personality, fit into the targeted age bracket, or meet some other predetermined “coolness” factor, you cannot lead in corporate worship. This is wrong. Worship leadership should resemble the radical diversity of Christ’s Kingdom, and a choir facilitates this quite well.

In closing, we need to stop and think about all we are giving up when we lose a choral presence in corporate worship. I think decreased emphasis on choral music in church is costing us dearly in our ability to follow the New Testament admonishment to sing and make melody in our hearts to the Lord.

The above article, “9 Reasons to Keep the Church Choir Alive” was written by Jonathan Aigner. The article was excerpted from www.patheos.com.