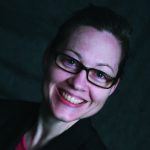 Sis. Lori Wagner of Clarkston, Michigan came up with the unique concept of including Kingdom concepts in a family board game. Sis. Wagner, who is an author of 14 books and is currently working on several writing projects, has created a fun family board game called Orbis. She is also a licensed minister and has served as the Michigan State Coordinator for the National Day of Prayer and as an elected representative in her community for five terms. Sis. Wagner’s time is split between managing her home, writing, traveling and speaking. She and her husband, Bill, have four children and are active in their local church and community.

Sis. Wagner explained that the idea for the Orbis game was sparked by a family game night in her home two years ago. “The board games I was raised playing were all about gaining wealth, property and control for yourself, but those aren’t Kingdom concepts,” she said. “In the Kingdom of God, people don’t win by accumulating riches, but by going, giving and serving.”

She described Orbis as a “reverse monopoly” game that is simple to learn and easy to play. Due to language, it is recommended for ages 10 and up and is played by two to four players or teams. To play, a die is rolled and players travel the track around the game board. Each turn a player lands on a space where they either raise funds, pay expenses or draw a Compassion in Action card that launches them on a global or local adventure. Funds are either raised or spent and colored markers are placed on the map in the locations served.

Orbis was originally designed with families in mind, but it is also a great homeschool, Sunday school or Christian education resource when played in teams. The name Orbis is Latin for “world.” Sis. Wagner said, “I created the game with the slogan of the United Pentecostal Church in mind: The whole gospel to the whole world by the whole church. The game is suitable for Christians of all denominations but has some Apostolic doctrine included. For example, each Compassion in Action card has a mission to complete and related Scripture. One card says, ‘Preach a red-hot revival in Ethiopia’ and its Scripture reference is Acts 2:38.”

There are some twists to the game like the Matching Funds space where players have the opportunity to get a windfall and place several markers at one time. If you land on Deputation, you have to roll the die to see how long you stay there. Players could get stuck on the same spot for up to six turns, but while they aren’t able to go out on the field, they do earn $1,000 for each turn missed. The first person to bless their world by putting all 10 of their markers on the map wins.

This is truly a kitchen-table enterprise assembled with components custom-made and purchased by different suppliers across the nation. The vibrantly colored game board is printed on rubber-backed fabric that enables it to be rolled up like a map. The game comes packaged in a backpack that makes it mobile, so players can take it “into all the world” in this Great Commission game. “I’ve been receiving a lot of great feedback. Teachers and parents have been sending me pictures of children playing the game in classrooms, homes, and even at a ladies’ game night,” she said.

Sis. Wagner has partnered with the Pentecostal Publishing House for distribution. It’s also available through Amazon, and from her website: www.AffirmingFaith.com for $29.95. “I take it with me when I travel and speak. Other distribution channels are still being explored,” she said.

For more information and to order please contact by phone (248) 909-5735 or by email:loriwagner@affirmingfaith.com