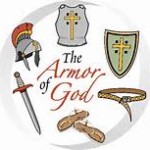 By Rick A. Hughes

Over the past few years “UNDER ARMOUR” apparel has become a market leader in the field of athletic apparel. The “Under Armour” brand theme for some time has been ‘Protect This House,’ a theme which sends a strong message that an athlete must be ‘under armour’ prior to entering an athletic contest or challenge, in order to protect his or her body from harm.

Which begs the question, “Are you ‘Under Armour?'” I’m speaking of the whole armour of God. If not, you are already defeated, and may not even know it yet. I fear many saints of God are entering the job site without their uniform, the recreation center without their gear, and the war zone without their armour, and as a result are eaten up and spit out by the enemy! Some have forgotten the necessity of the protective covering of the Almighty God.

The legend of King Arthur of Winchester and the 12 Knights of the Round Table from medieval times creates a mental picture. These brave, courageous men were completely covered in shiny armour with nothing exposed. They were clad in armour for protection from any enemy or foe. These warriors knew anything exposed immediately became a target, a weakness, a liability.

Apostle Paul in Ephesians chapter six wrote about the Armour of God while under house arrest in Rome for preaching about Jesus. Rome was headquarters for the world’s most highly developed military machine The Roman Army. Through this world-conquering military the entire civilized world had fallen prey to the Roman Empire. As Paul was surrounded by this huge military machine and bound to a heavily armed Roman soldier, it was logical his thoughts would turn toward spiritual warfare and spiritual armor. No doubt right at Paul’s side was a fully armed soldier clad in armour appropriate for the task. This caused Paul to instruct the Church to be “under armour.”

We are in spiritual warfare and our enemy is playing for keeps. He is fighting for your soul, your family, your community, etc. If we are to resist the devil and be victorious, we must be “under armour,” the whole armour of God. Satan is targeting weaknesses and looking for anything not covered by the armour, anything exposed to the elements.

If you are not “under armour” I encourage you to submit and place yourself “under armour.” Scripture teaches to put on the armour and never take it off. We must daily “pray the armour of God” in order to “protect this house” (the house of the living God). “Under Armour”… don’t leave home without it!

The above article, “Are You Under Armour?” is written by Rick A. Hughes. The article was excerpted from the Oklahoma District Beacon.