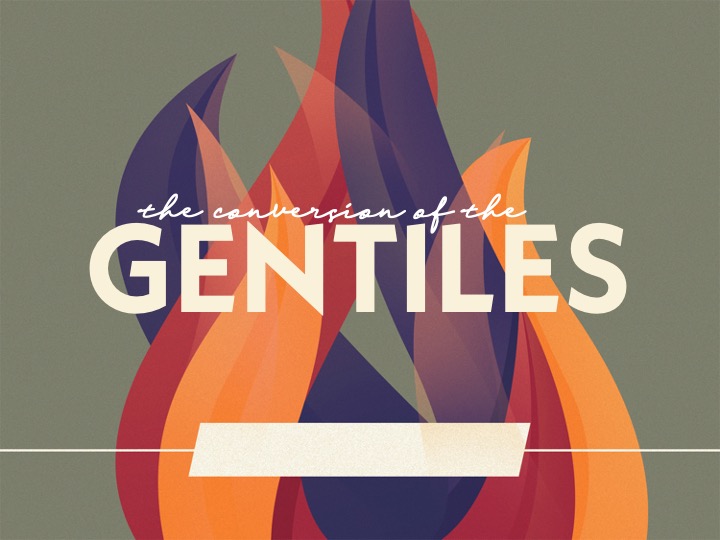 Lesson Twelve
The Conversion of the Gentiles

TEXT: Acts, Chapters Ten & Eleven.
The Gospel to the Uttermost:
• In the commission Jesus had said that they would be witnesses to the uttermost part of the earth.
• This would take in the Gentiles.
• The Lord had given Peter the keys to the Kingdom (Matthew 16).
• He had unlocked the door of the Kingdom to the Jews on the Day of Pentecost.
• It was under his ministry that the Samaritans received the Holy Ghost.
• In Acts 10 we read the story of Peter being the minister to take the gospel to the Gentiles.
• Thus he uses the keys once again to unlock the door of the Kingdom.

Who Was Cornelius?
• Cornelius was a Roman centurion.
• This meant that he was an officer in the Roman army and over a company of one hundred men.
• He was a devout man, who feared God, and gave much alms.
• He also was a man of prayer.
• Cornelius was stationed at Caesarea; a seaport, which had been built by Herod the Great.
• It became the headquarters of the Roman authority in Palestine.
• Although Cornelius was a man of good works he was not saved.
• His good works did not save him. His prayers and good works went up to God as a memorial but they did not save him.
• At three o’clock in the afternoon, Cornelius had a vision.
• He was praying because this was the hour of prayer.
• In the vision the Lord sent an angel with explicit instructions where he could find a preacher who would tell him what to do.
• This is a clear example that angels do not preach the gospel in this dispensation.
• Angels have never been baptized in Jesus’ Name nor filled with the Holy Ghost.
• It takes men filled with the Holy Ghost to preach the Gospel.
• In this case that man was Peter who was at Joppa.

Peter’s Vision:
• Peter was staying in the home of Simon the Tanner in the city of Joppa, a seaport some thirty miles south of Caesarea.
• The next day after Cornelius had had his vision Peter was on the flat roof of Simon’s house praying.
• It was at noon and he was hungry.
• While waiting for something to eat he fell into a trance.
• He saw a great sheet being let down from heaven full of all kinds of ceremonially unclean animals.
• A voice commanded him, “Rise, Peter; kill, and eat.”
• Peter recognized the order as from the Lord, but he did not acknowledge the Lord’s right to command him to do what was forbidden by the Law of Moses.
• Peter said, “Not so, Lord.”
• “Not so” and “Lord” are complete contradictions.
• If He is Lord one cannot say, “Not so” and if one say, “Not so” He cannot be Lord.
• Peter says, “I have never eaten anything common or unclean.”
• The Lord replied, “What God hath cleansed, that call not thou common.”
• Jesus had challenged his love three times (John 21) and now this lesson is repeated three times.
• At first Peter did not understand the meaning of the vision, but later he recognized what God was telling him (Acts 10:28).

Peter’s Audience:
• While Peter was considering the vision, the Holy Spirit spoke him to that three men were seeking him and that he was to go with them without questioning.
• The next morning Peter left for Caesarea with these three men accompanied with six brethren (Acts 11:12).
• This made a party of ten men who made the trip thirty miles to Caesarea.
• The morning of the following day after reaching Caesarea Peter went to the home of Cornelius.
• He found the house filled with Gentiles.
• Cornelius had called in his relatives and friends.
• As Peter enters the home of Cornelius, the centurion fell at his feet and worshipped him.
• To worship a human being is idolatry, and Peter would have none of it.
• “Stand up,” said he, “I myself also am a man.”
• Peter finds a crowd gathered with which was a God-prepared audience ready to hear the Gospel.
• Cornelius was in earnest and he had filled the house with guest prepared to hear the Word of God.
• What a thrill to speak to a group like this!

Peter’s Sermon:
• Peter’s sermon was very simple but yet comprehensive.
• He gives a brief summary of our Lord’s ministry from His baptism by John up to the crucifixion and resurrection.
• He tells them that whosoever believeth in Him shall through His name receive remission of sins.
• The Holy Ghost interrupted the sermon.
• Peter never finished his sermon.
• Right in the middle of the sermon the Holy Ghost fell on all that heard the Word.

How Were The Gentiles Saved?
• The seven Jews who were present were astonished that the Gentiles received had the Holy Ghost.
• They heard them speak in tongues and magnify God (verse 46).
• Peter then commanded them to be baptized in water in the name of the Lord. We should note the order that took place here: (1) Faith; (2) Holy Ghost; and (3) Water Baptism in the Name of the Lord.
• The FAITH that brought salvation to the Gentiles was FAITH UNTO OBEDIENCE.

A. Who was Cornelius?

B. In what city was Cornelius stationed?

C. At what time of day did Cornelius have his vision?

D. In what city was Peter staying at this time?

E. At what time of day did Peter have his vision?

F. How many miles apart were Caesarea and Joppa?

G. How many men did Cornelius send to Joppa?

H. How many men were in the party that journeyed to Caesarea?

I. Why did the Lord use Peter to preach the gospel to Cornelius?

J. To whom did Peter preach at Caesarea?

K. How were the Gentiles saved?