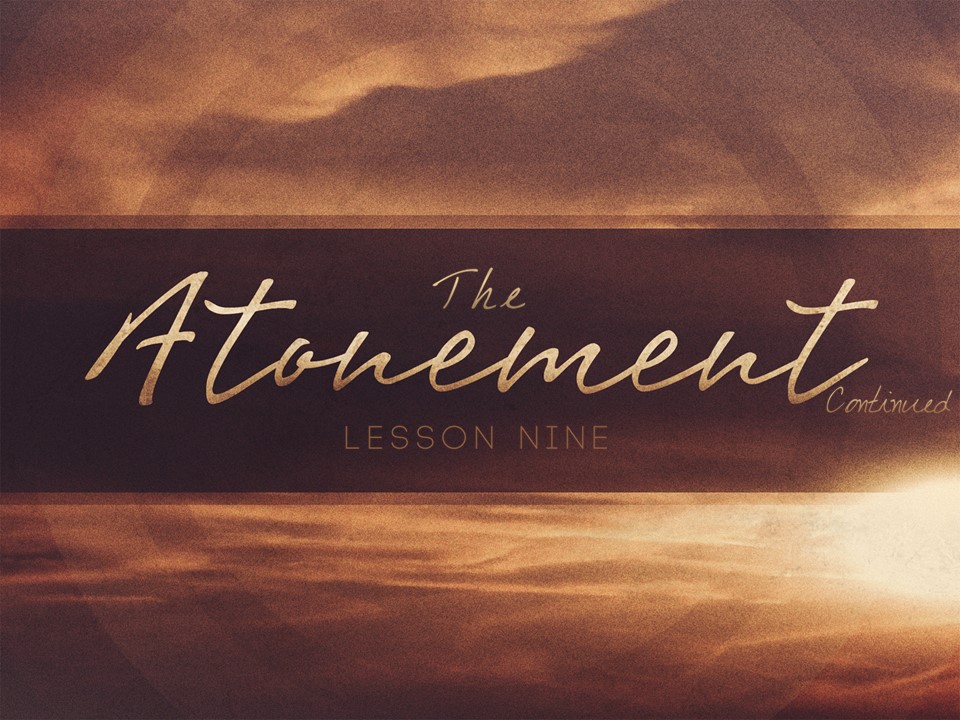 A. THE EFFICACY OF THE ATONEMENT.
The meaning of the word “efficacious” is “producing or sure to produce a desired result.”
What does the atonement produce?

3. DELIVERANCE FROM DEATH.
Death is the result of sin. “That he by the grace of God should taste of death for every man” (Hebrews 2:9). “Whosoever liveth and believeth in me shall never die” (John 11:26).

B. THE NATURE OF THE ATONEMENT.
• The word “atonement” in the Hebrew means literally “to cover,” and is translated in our Authorized Version by the following words: make atonement, purge, purge away, reconcile, make reconciliation, pacify, pardon, to be merciful, put off.
• Atonement includes the covering of both the sins and the sinner.
• To atone for sin is to cover sin from God’s sight so that it loses its power to provoke His wrath.
• What were the effects of the atonement or covering?
1. Blotted out – Jeremiah 18:23, Isaiah 43:25.
2. Removed – Isaiah 6:7.
3. Covered – Psalm 32:1.
4. Cast into the depths of the sea – Micah 2:19.
5. Cast behind God’s back – Isaiah 38:17.
6. Pardoned – Psalm 78:38.

• The sacrifices of the Old Testament were substitutionary in nature; in like manner, Jesus did for us on the cross what we could not do for ourselves.
• Having taken human nature, He was able to identify Himself with mankind and so suffer their penalty.
• He died in our stead; He took the penalty that was ours, in order that we might escape it. Read and study carefully Isaiah, chapter fifty-three.

D. PROPITIATION.
• The word “propitiation” is believed to come from a Latin word “prope” meaning “near.”
• A sacrifice of propitiation brings man near to God, reconciles him to God by atoning for his transgressions and winning Divine favour and grace. To propitiate is to appease the righteous wrath of a holy God by the offering of an atoning sacrifice. Christ is described as such a propitiation (Romans 3:25, I John 2:2).
• Sin keeps man at a distance from God but Christ has so dealt with sin on man’s behalf that man may now “draw nigh” to God “in His name.” The word “propitiation” in Romans 3:25 is the same word in the Greek used to translate the word “mercy seat

E. THE IMPORTANCE OF THE ATONEMENT.
• The incarnation was for the purpose of the atonement. Jesus partook of flesh and blood in order that He might die. (I John 3:5, Hebrews 2:14).
• Christ came into the world to give His life a ransom for many (Matthew 20:28).
• One out of every forty-four verses in the New Testament speaks of the atonement and the death of Christ is mentioned one hundred and seventy-five times.
• The importance of the atonement may be seen by the fact that:
1. Moses and Elijah were interested in the death of Christ (Luke 9:30).
2. The Old Testament prophets searched deeply into this great subject (I Peter 1:11).
3. The theme of the song in heaven is that of Christ’s death (Revelation 5:8-12).

F. UNSCRIPTURAL VIEWS OF CHRIST’S DEATH.
• Modern thought fails to see the necessity of Jesus dying.
• Stephen died a martyr and Saul of Tarsus watched him die, but Paul did not preach forgiveness of sins through Stephen’s death (Acts 13:38).
• We must see sin as the Bible depicts it, in its exceeding sinfulness, that which must be punished, and guilt which needs expiation, then and only then, will we understand the reason for the cross of Christ.

G. EFFECTS OF CHRIST’S DEATH ON THE UNIVERSE.
• Just as the entire world was affected by the fall of man even so does the death of Christ have an effect on the entire universe (Romans 8:19-23).
• The propitiation reaches to the farthest bounds of the universe and as far as sin goes. In other words, the remedy is as great as the need.
• Man need no longer be a slave of sin. Calvary brings to the needy a remission of the past, present, and future sins. Now it is not so much a question of what shall I do with my sins, but rather what shall I do with Jesus who is called Christ? “Blotting out the handwriting of ordinances that was against us, which was contrary to us, and took it out of the way nailing it at the cross” (Colossians 2:14).

1. Define clearly each of the following words:

2. Give one example of substitutionary death:

4. How do we know that the Old Testament prophets were interested in the atonement?