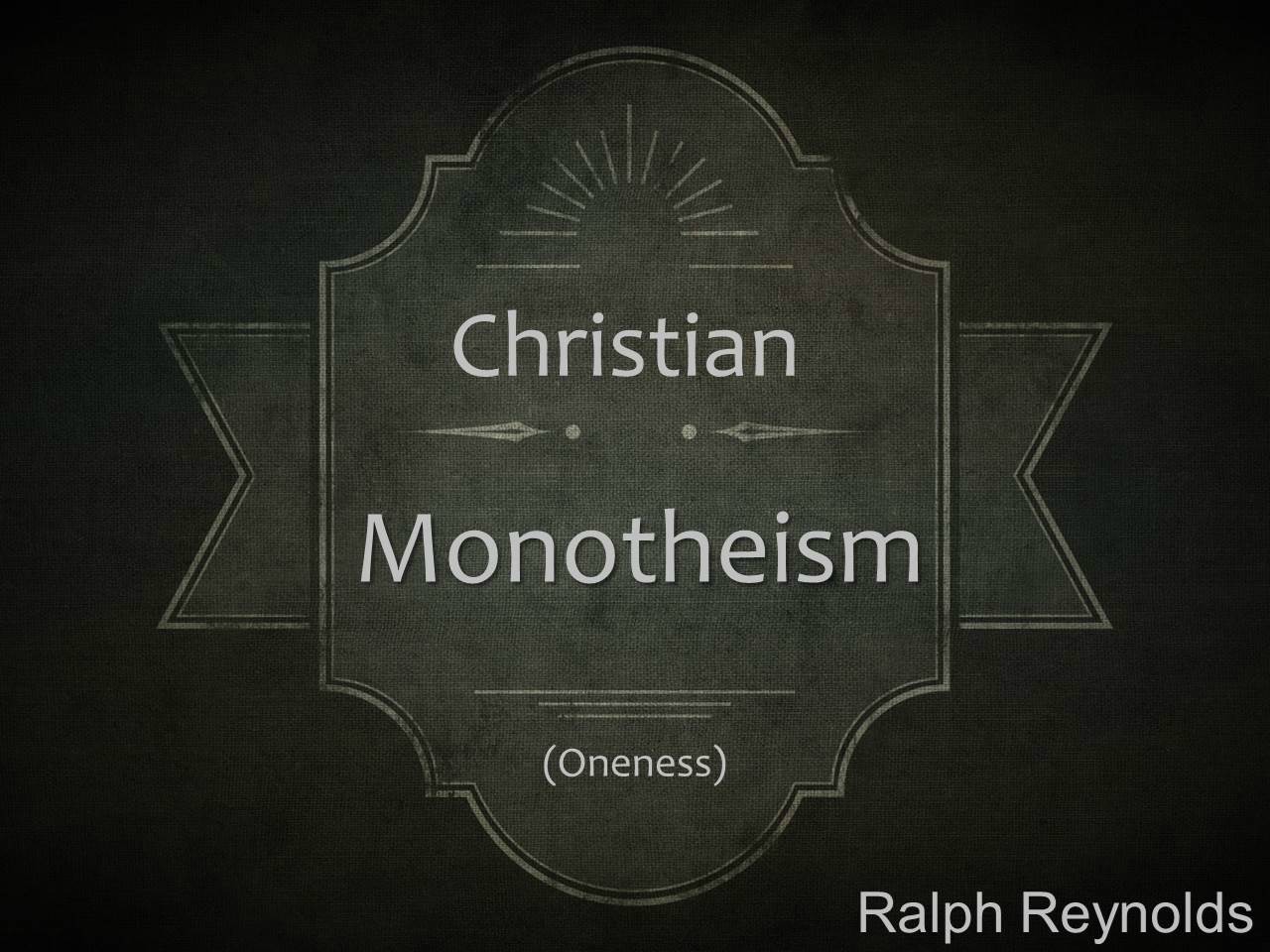 There is only one Supreme Being who is God; He cannot be multiplied nor pluralized.

Possibly no other truth of Scripture receives more prominence than that of the Oneness of God. There are over fifty passages of Scripture that teach that God is one and that there is no other. The very meaning of the term “God” signifies the Supreme, Almighty One. There can be but one ultimate all-inclusive God. This is the great truth and message of the Old Testament, which is also substantiated in the New Testament. The truth taught in the Old Testament is never contradicted in the New Testament, but rather fulfilled.

A multiplication of Gods is a contradiction. He cannot be multiplied and He is indivisible. If there could be even two Gods, then there could be hundreds and thousands of gods. If there could be a second God, then Satan would not have fallen when he reached for equality with God. Likewise Adam and Eve would never have fallen when they exerted their own will in the act of disobedience. Although God is omniscient, there is one thing that He does not know. He does not know another God (Isaiah 44:8).

The word “Trinity” is not in the Bible. The doctrine called the Trinity was introduced by the Roman Catholic synod at the beginning of the third century at the Nicean Council in 325 A.D. The Athanasian Creed later made the Trinity a fundamental tenet. It kept company with other Roman Catholic tenets such as transubstantiation, indulgencies, “Mariolatry,” etc. Unfortunately, when

Protestants repudiated the above fallacies they held onto the error of the Trinity, maintaining a vital link with the false and unscriptural creeds of the Roman Catholic church.

The word “persons,” when used regarding the Godhead, does violence to the absolute Oneness of God. Dividing God into three persons makes three Gods, which is Tri-theism, regardless of how it may be argued otherwise. God is the “Three-in-One,” not the “One-in-Three.” The doctrine of the Trinity leads to much confusion and contradiction.

Since our faith is built upon the foundation of our knowledge of God, and His revelation of Himself to us, it is evident that it is necessary to build upon the Oneness truth. The trinity doctrine, which is simply the tradition of man, will not stand in the Day of Judgment.

God is Spirit and as such He has no physical limitations. He only may be seen in Jesus Christ.

The Bible makes very clear that God is Spirit. It is only as He is Spirit that He can be omnipresent, everywhere present at the same time, filling the universe. The Samaritan woman asked, “Where is God to be found? On Mt. Zion or Mt. Gerizim?” To this question Jesus answered that God is not to be confined to any one place. God is everywhere; the heaven and heaven of heavens cannot contain Him. This only can be if God be Spirit.

Since God is Spirit, He does not have any physical parts or bodily limitations. It is true that God is spoken of as having hands, feet, arms, eyes, and ears; and also, He sees, feels, walks, etc. Such expressions as relating to God are human expressions, used in order to bring the infinite within the comprehension of the finite. Only by means of human expressions can we understand God, the eternal Spirit.

Since God is Spirit, He is invisible (Colossians 1:15; 1 Timothy 1:17). No man has seen God at any time (John 1:18). For this reason images were forbidden. No one has seen God, and nothing on earth can resemble Him. However, God manifested Himself in flesh (1 Timothy 3:16). Jesus Christ is the express image of his person (Hebrews 1:3). As such, God may be seen in Jesus Christ. In fact, the only way that man can see God is to see Him in Christ Jesus.

The most important fact here is to remember that, since God is Spirit, He must be worshipped in spirit and truth. Naturally this can best be done by Pentecostal people, Spirit-filled, and having the revelation of the Oneness truth, the Mighty God in Christ Jesus. Also, it must be remembered that there is only ONE who will be seen in heaven.

III. God Was Manifest in the Flesh

In the incarnation, the Word became flesh, and in that flesh the Mighty God was manifest.

We shall explain briefly this great truth under the following five headings:

It should be noted that in the incarnation the Holy Ghost was the father of the baby who was born of Mary who was a virgin (Matthew 1:18-23). If the trinity theory was correct, and there were three persons in the Godhead, then the baby Jesus must have had two fathers. This of course is impossible. The one true God, who is Spirit, was the Father of the flesh that was born and, at the same time, manifested Himself in that flesh. It also should be noted that one of the titles of Jesus Christ is Emmanuel, which means “God with us” (Matthew 1:23).

Just as a man’s thinking, and expression of that thinking, cannot be separated from the man himself, and is, in essence, part of his very being, not another person, so it is with God. The Scripture written by the apostle, under inspiration to safeguard against the error of another person, clearly states: the Logos was God.

In the past God manifested Himself in many ways to man. In creation, on Mt. Sinai, in the Theophanies, in the Tabernacle, etc., man was able to receive certain knowledge of God. However, in the one Scripture that speaks of God being manifested, we have the greatest knowledge of God ever given, for in the incarnation Christ is the express image of the invisible God. (Hebrews 1:3).

In the incarnation, Jesus Christ possessed a dual nature: divinity and humanity. However, it should be clearly understood that Jesus Christ was not two persons, nor did He possess two personalities. He was God-man, the Word-Incarnate, God manifest in flesh. As a human being, He was the Son; as God, He was the Father. As the Son, many times He spoke and acted as a man; as the Father, He spoke and acted as God.

In His humanity, Jesus Christ was the Son of God. Sonship denotes beginning, also a relation to time and place. Only as He became a man was He able to become the only begotten Son (John 3:16). He was not an eternal son nor a created son, but a son that was conceived in the womb of Mary. As a son, He grew and matured, and was subject to the Father. As a son, He tasted of our infirmities and weaknesses, and was tempted in every point.

The “eternal Son” theory is not Scriptural. It came as the result of the Trinitarian theory, and teaches a second person in the Godhead. Jesus Christ in the flesh was the begotten Son. The words “begotten” and “eternal” mean the very opposite and contradict each other. The purpose of the Sonship was as follows:

This glorious truth solves all problems concerning the life and ministry of our Lord. It explains how He could be tempted, how He could pray, how He could die on Calvary, etc. If anyone should have difficulty in understanding just how Jesus Christ could occupy two offices at the same time, we would draw their attention to Isaiah 53:6: “The Lord hath laid on him the iniquity of us all.” Who is the high Priest? Who is the sacrificial lamb who carries our iniquity? If Jesus Christ can be both priest and sacrifice at the same time, He also can be Father and Son, Divinity and Humanity.

It is clearly revealed that Jesus Christ possesses both the attributes and the prerogatives of Deity. This fact conclusively proves the Deity of Jesus Christ.

We shall explain this truth by dealing with three attributes and three prerogatives: These should be sufficient to prove this proposition.

The fact that Jesus possesses the attributes and prerogatives of Deity conclusively proves His Deity, in spite of all the arguments of skeptics and unbelievers to the contrary.

In the New Testament God’s name is revealed, which is JESUS. The name of the Father, Son, and Holy Ghost is JESUS.

The prophet stated that there is one Lord and His name one (Zechariah 14:9). If we believe that there are three persons in the Godhead (three Gods), then we shall have to have three names. A person is identified by his name. However, the prophet states that his name is ONE. In the Great Commission, as stated in Matthew 28:19, the name is singular. What is that name? We find the answer in Acts 4:12. There is no other name

There are many titles of our God, all of which depict His offices and characteristics. Among them are the titles Father, Son, and Holy Ghost. In like manner, a man is body, soul, and spirit, but this is not the man’s name. Would a bank cash a check which carries the signature, “Body, soul, and spirit”? We know that the check must carry his signature, which is his name. At one time the writer was his son’s school teacher and his pastor. To his son he was “Father, Pastor, and Teacher.” These were three titles, but none of them was his name. Even so Father, Son, and Holy Ghost are not names but titles.

The testimony of Scripture is overwhelming, stating clearly the truth and leaving no room for even a shadow of doubt that the name of deity is Jesus. No attempt will be made here to give a comprehensive study of this marvelous truth. A study of the following Scriptures will convince every honest heart:

There is no other name under heaven whereby we must be saved (Acts 4:12). Jesus is the saving name of our God. It is quite evident that Matthew 28:19 is only being obeyed when a person is being baptized into the name of Jesus. In fact whatever we do in word or deed we must do in the name of Jesus (Colossians 3:17).

This article “Christian Monotheism” was excerpted from: Truth Shall Triumph written by Ralph Vincent Reynolds. Copyright 1965. It may be used for study & research purposes only.