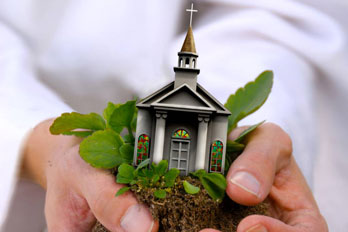 Protestants are planting new churches in America faster than their old churches are closing.

More than 4,000 new Protestant churches opened their doors in the United States in 2014, outpacing the 3,700 that shuttered, according to estimates by LifeWay Research based on input from 34 denominational statisticians. And American church planters say 42 percent of their worshipers were unchurched while 43 percent switched from an existing church, according to LifeWay’s 2015 National Church Planting Study, released today.

Of the people who currently attend our church, what is their background?

Previously part of other existing churches 43%

Unchurched for many years 24%

Children born to people who attend your church 9%

What form of publicity is the most successful at attracting new members?

“In winning new converts to Christ, church plants are light years ahead of the average church because of their focus on reaching the unchurched,” said executive director Ed Stetzer.

“Healthy new churches have an outward focus from day one, communicating every month that the goal is to be a multiplying church,” Stetzer said.

Though some pastors bristle at new churches coming into their community, they have much to learn—and not much to fear—from the startup down the street, Stetzer said.

One lesson is the value of time-tested methods. While most church plants use the Internet for outreach, 77 percent say word of mouth and personal relationships are the most effective forms of publicity, while only 6 percent say social media is most effective.

The above article, “Church Planting 2015: Who Attends and What Attracted Them” was written by Lisa Cannon Green. The article was excerpted from www.lifewayresearch.com.