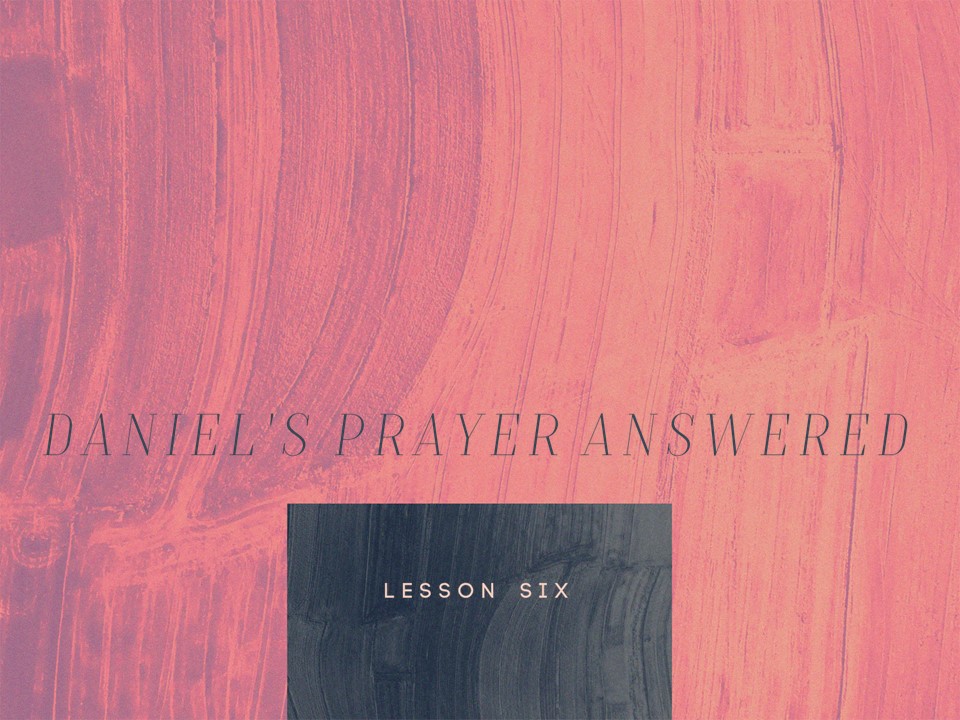 A. IMPORTANCE OF CHAPTER NINE:

This chapter is one of the most important chapters in the Bible relating to prophesy. It has been
spoken of as being the framework of Bible Prophecy.

The key verse of this chapter gives the key to the correct interpretation of Bible prophecy.
“Seventy weeks are determined upon thy people and upon thy holy city, to finish the
transgression, and to make an end of sins, and to make reconciliation for iniquity, and to
bring in everlasting righteousness, and to seal up the vision and prophecy, and to anoint the
most Holy” (Daniel 9:24).

Before this revelation came to Daniel by Gabriel he had been praying concerning the future of
his people, the Jews, who had been in captivity for nearly seventy years. “O Lord, hear; O
Lord, forgive: O Lord, hearken and do; defer not, for thine own sake, O my God: for thy city
and thy people are called by thy name” (Daniel 9:19).

Daniel prayed for Thy City -Jerusalem and Thy People – Judah. God sent an answer, which
concerned the future of Thy People -Judah and Thy Holy City – Jerusalem.

The prophetical truth brought out in this chapter applies to Israel only. It does not deal with the
Gentiles or the church. The moment an attempt is made to make it apply to the church, violence
is done to God’s Word, and as a result there can only be a misunderstanding concerning all
prophecy.

Once this is clearly and properly understood then a study may be made of the Tribulation
described in Revelation. It applies to the nation of Israel and not to the Gentiles.

The events of chapter nine took place in the first year of the reign of Darius. Daniel was about
ninety years of age. He was burdened concerning the future of the nation of Israel. He
understood that the seventy years of captivity was coming to an end, and soon it would be time
for the Jews to return home to their own land. Again they would be able to worship in the holy
city, Jerusalem.

It is very important to be a student of the Scriptures. Daniel gave us an excellent example of the
value of being familiar with the Word of God.

In verse two of this chapter Daniel stated that he understood that the captivity would be seventy
years in length. This fact he learned by reading the writings of Jeremiah the prophet. The
message that Daniel referred to is Jeremiah 25:11-12, “And this whole land shall be a
desolation, and an astonishment; and these nations shall serve the king of Babylon seventy
years. And it shall come to pass, when seventy years are accomplished, that I will punish the
king of Babylon…”

This must have been very encouraging to Daniel who was also familiar with the truth taught in
Leviticus: “And I will scatter you among the heathen, and will draw out a sword after you:
and you land shall be desolate, and your cities waste. Then shall the land enjoy her sabbaths,
as long as it lieth desolate, and ye be in your enemies land; even then shall the land rest, and
enjoy her sabbaths” (Leviticus 26:33-34).

The children of Israel had been in Palestine from the occupation of the land until the time of the
captivity, exactly 490 years. Every seventh year was a sabbatic year. These sabbatic years the
Jews had not kept. This meant that there were exactly 70 sabbatic years in that period of time.
God said that the land would enjoy rests during the time of scattering among the heathen. This
was another proof to Daniel that the time of the captivity was coming to an end.
Daniel would never have been aware of this fact if he had not been a student of the Scriptures.

Just as Daniel left us an example of being a Bible student, he gave us a great example of being a
man of prayer. We find here recorded one of the greatest prayers of the Bible. It was in
deepest humiliation that Daniel approached the Lord. We can feel the spirit of sincerity,
humility and earnestness that was manifested in this prayer.

Although Daniel was one of the perfect men of the Bible, yet he confessed his sins before God.
He identified himself with his people, and in this prayer of intercession, confessed the sins of
the whole nation. “And I prayed unto the Lord my God, and made my confession…” (Daniel
9:4). “We have sinned, and have committed iniquity, and have done wickedly, and have
rebelled, even by departing from thy precepts and from thy judgments” (Daniel 9:4).
Some of the hardest words to say are: “I have sinned.” Here Daniel confesses “We have
sinned.”

He set his face before God to seek by prayer, fasting and repentance to have the future of Israel
revealed. When God’s conditions are met, the answer is swift and certain. In fact Daniel’s
prayer was an unfinished prayer. While he was yet praying, the answer came (Daniel 9:20-21).
God sent one of His greatest messengers, Gabriel, with the answer. At the very beginning of
Daniel’s prayer Gabriel had been commissioned and sent. The length of time it took Gabriel to
come was the time Daniel was praying.

Gabriel told Daniel that he was greatly beloved. This would teach us that God has special
delight in those who serve Him as faithfully as Daniel does.

Is it possible to think of any greater honor than to have God say, “Thou art greatly beloved?”
This special place in the heart of God can be won by anyone who will be true and faithful as
Daniel.

F. THE ANSWER TO DANIEL’S PRAYER:

There was no “Amen” concluding Daniel’s prayer. While he was still praying, Gabriel touched
him. It was the time of the evening sacrifice. We know that Gabriel appeared as a man for
Daniel called him a man.

Gabriel came to give Daniel skill and understanding concerning the future of Daniel’s people.
Let it be fully understood that the message Gabriel brought was relative to the nation of Israel
only. It referred to “thy people” and to “thy holy city.” It had no application as far as the
Gentiles nor the church are concerned. This is very important in understanding the book of
Revelation.

The seventy weeks are determined or “fixed.” This period of time is settled and planned by
God. There will be no changing in the length of time.

2. WEEK OF YEARS:
The expression “seventy years” literally meant “seventy sevens.” Seven is the perfect
number of God. In the Bible we find a week of days, a week of months, a week of years, a
week of millennia, and a week of ages. The context in each instance makes clear the exact
meaning. In this case, it is clear that it is a week of years.

In Genesis we read that seven years are called a week. “Fulfill her week, and we will give
thee this also for the service which thou shalt serve with me yet seven other years”
(Genesis 29:27).

When Laban deceived Jacob by giving him Leah instead of Rachel, he told him that he
could fulfill her week or work another seven years.

Therefore, when Gabriel told Daniel that seventy weeks are fixed for the nation of Israel, he
actually said that there are 490 years determined for God’s plan to be fulfilled for Israel.
It is worthy of consideration to note that God dealt with Israel in periods of 490 years:

This period of seventy weeks was to begin with the decree to restore and build Jerusalem.
From this point of time there would be exactly 483 years to the crucifixion of Christ. To
find the date when this decree went forth we turn to Nehemiah 2:1, “And it came to pass in
the month of Nisan, in the twentieth year of Artaxerxes the king.”

According to this Scripture we begin our calculation from the month of Nisan in the
twentieth year of Artaxerxes. Not all reference books agree as far as the date and the
calculation of the 69 weeks are concerned. However, the writer of these notes, after reading
many references on the subject has concluded that this date would be the month of April,
445 BC. Taking the prophetical year to be 360 days in length, it has been calculated that
this would end in April, 32 AD.

Much time could be spent on calculating the dates, but whether this would be profitable is
doubtful. The simple statement of God’s Word should be sufficient. The 69 weeks of
years would go until the “Messiah be cut off.” After this Jerusalem would be destroyed not
by Antichrist, but by the “people of the prince” or the people of Antichrist. Antichrist does
not come upon the scene in person until the 70th week. Between the 69th and 70th week is
the fullness of the Gentiles or the church dispensation.

H. PROPHETIC PARENTHESIS BETWEEN THE 69TH AND THE 70TH WEEKS:
A prophetic parenthesis of time takes place between the 69th and 70th weeks for the following
reasons:

1. The fulfillment of the tremendous events in verse 24 cannot be found anywhere in known
history. These events are still future.
– to finish the transgression.
– to make an end of sins.
– to make reconciliation for iniquity.
– to bring in everlasting righteousness.
– to seal up the vision and prophecy.
– to anoint a most holy place.
Note: The phrase “to anoint the most Holy” is given in the original as “to anoint the
most holy place. Some teachers claim that this is referring to the anointing of Jesus at
Jordan, but it refers to the building of the Temple in the Millennium.

2. The reason the prophecy is silent about the church age is because it deals solely with Israel.
The church is the “fullness of the Gentiles” and this was not revealed to Daniel.