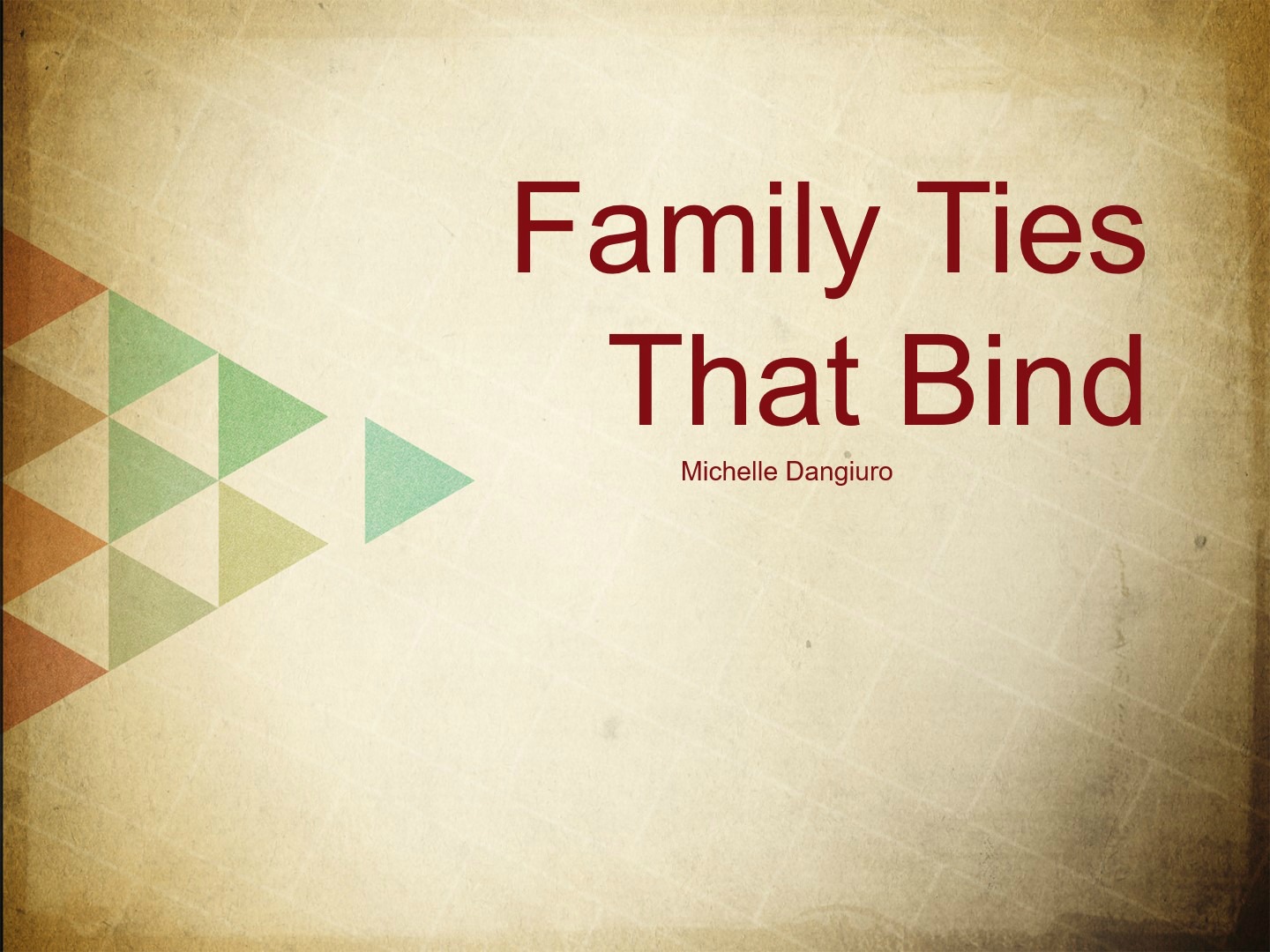 -Ben Stein, in his book Tommy and Me

There was a time when television was a family affair. But even when television brought the family together in one room, it really never brought the family together. The relationships being formed were individual, one-way relationships with an electronic box. The only eye contact being made was with the “one-eyed monster.” The emotions displayed were prompted by people who weren’t even in the room. Together, yet separate.

When I was growing up we had television, and because of it, there was very little physical contact between anybody in the family. If there was, it was a _fight over a seat in front of the tube. I think about it now and think; what a loss. We could have learned so much about each other that we just never learned. Television hasn’t been there to hinder us from really getting to know each other in my family now. When we’re home, our evenings are wrestling on the floor with the boys or reading stories. Either we read to the children or our oldest son reads to us. We’re always in the living room in the evenings until bedtime, and we’re always together.

Now, families with multiple sets, cable, and video don’t even sit together in the same room anymore. Program preference overrides the pretense of family bonding via satellite and everyone scatters to enjoy the “family hour” alone. This is a teenager’s dream come true, right? Maybe not.

Television is one of the worst things that has happened to my family. We eat dinner in front of the TV, and if there’s any conversation, it’s mostly about the evening news. We have four TV’s, and at night everyone watches their own. I want to talk to my parents, but I can’t when they’re watching TV. Especially my dad. And if he’s not watching TV, he’s watching a movie he’s rented. I hardly know him.

A common complaint of parents is that their teens won’t communicate with them. Many of these same parents are so addicted to the TV themselves that they don’t even realize the precious time they’re losing with their children, let alone the feelings of rejection and neglect being stored up in these fragile hearts. What heart break to be displaced by an electronic box. And what is the message being broadcast from parent to child? This program I’m watching is more enjoyable and more important to me than you are.

You are important, Dad. How important? Research shows that:

In his book Tommy and Me, Ben Stein poses this simple yet profound question: “When was the last time you heard a child say he wished he had spent less time with his father?” Sadly, in a recent survey, fifty-four percent of 4 to 6-year-olds who were asked to choose between television watching and quality time with dad opted for TV. This is scary and speaks volumes about young children’s relationships with their fathers.

Family time together is a priority. We sit down and talk to one another. We have a 6-year-old, a 4-year-old, and a 1-year-old. They’re all demanding time. Not having a TV around builds our family structure and children’s character much stronger. When other people are watching the eight o ‘clock sitcoms, we’re talking and communicating in the family. All the little conversations that happen, all the hugs and kisses and hand-holding build character and let our children know we love and appreciate them and that what they say matters. They’ve got my full attention, like my boss at work would have my full attention.

According to Marvin R. Wilson, in his book Our Father Abraham, the single-most important objective of Jewish education in Bible times was training the person for “lifelong, obedient service in the knowledge of God.” And the center of education from the earliest years of Israel’s history was the home, the primary teacher Dad. Along these same lines, in his book The Insecurity of Freedom, Abraham J. Herschel writes:

Education is a matter that rests primarily with the parents, with the father. The teacher is but a representative of the father, according to Jewish tradition. Thou shalt teach them diligently, not vicariously. Now parents act as they please, commercialism and vulgarity blare from the loudspeakers—and little children are expected to listen to the voice of the Spirit. Religious instruction, like charity, begins at home.

God designated fathers as the instructors of their children, but many modern-day fathers abdicate this role to the television set. The goal of Jewish parental instruction was the handing-down of an historical and ethical heritage. Is it possible to pass the torch of your values and beliefs to the next generation if you’re merely passing them the remote control? Whose values and beliefs are they learning? Yours, or the ones Hollywood produces?

Television has been described by media commentators as “the babysitter”—the box that charges less than the teenager down the street and has better availability. It may be convenient to plop your child in front of the tube when you’re busy, but is it responsible? And more than that, is it healthy for the child and for the parents’ relationship with the child?

God convicted me about this. My daughter came up to me one night while I was at the computer and said, “Daddy, daddy, will you read me a story?” And this is exactly what I said to my wife: “Will you turn on the TV so Taylor will leave me alone?” Immediately God checked me on it. That was when I decided to get rid of our TV Now if she says, “Daddy, will you read me a story?” unless I am doing something I absolutely cannot stop doing, I stop and read her a story. She has a children’s Bible and we read at least two or three stories out of it every night. And she looks forward to it. She brings it to us and asks us if we’ll read her “two stories.” She prays by herself, too. And she’ll ask us to pray for her. She does all this stuff on her own. You can ask her how you’re supposed to be baptized, and she’ll tell you “in Jesus’ name.”

-Jamie, father of a three-year-old

We don’t have a TV because we used it as a babysitter for our daughter. Anytime we had something to do we would just sit her in front of the TV. Now that we don’t have a television (nine months and counting), I’ll sit down and I’ll read with her and I’ll color with her. When I wash dishes, she’ll pull up a chair beside me and she’ll help. If I’m folding clothes, she’s in there too, pretending like she’s folding her clothes. I just include her in everything I do during the day. She’s learning responsibility. And she’s changed dramatically. She’s more imaginative and plays by herself now, whereas before she wanted to be entertained. I thought I didn’t have time to teach her things, but in the last nine months, she has learned her ABC’s, she can count to 20, she knows her facial features in Spanish, and she knows her shapes and her colors.

-Rena, mother of a three-year-old

Entertain Me or Edify Me?

Some fun activities are just empty experiences while others add to us; they build us up on the inside while entertaining us on the outside. We all need fun the way we all get thirsty and need a drink. The difference comes in the choices we make: are we going to grab juice or will we pop open a can of artificial fizz? The same principle applies to the activities we engage in, especially family activities.

There’s a difference between recreation and entertainment. With entertainment, you’re simply sitting in front of something and being amused. It’s not requiring anything of you. And that’s what TV and video do. On the other hand, recreation—re-creating—is a way to renew or refresh yourself. Going for a walk with your kids, taking them to the park going camping, reading, cooking together, laughing, tickling, and playing. We’re bonding and we’re re-creating each other. We’re building each other up.

The word “amuse” literally means to not think. In light of all the Scriptures encouraging us to have sober, renewed, and spiritual minds, a turned-off brain doesn’t seem like a very biblical state of mind. And while watching television, the brain actually gets as close to a sleeping state as it can get without actually being asleep. Television quite literally inhibits our ability to think. It’s a zombie training ground.

Television and Love Languages: No Comprende

Television doesn’t just inhibit our mental abilities; its very nature inhibits our emotional abilities. As we’ve seen in the parent quotes above, family bonding and loving attention are virtually eliminated during TV viewing.

So what are some alternatives to parking the family in front of the TV or video monitor and counting the experience as quality “family time?” How can time spent with children become a loving, bonding experience? In his book The Five Love Languages of Children, Gary Chapman describes five ways in which parents can actively show love to their children:

Each of these expressions of love is biblically based and can yield endless possibilities of loving moments between parents and children:

A hug, a kiss, holding or patting a child’s hand, a back rub, tousling their hair, tickling, wrestling, cuddling. Touching is an expression of love.

Hanging out with your children, doing things they enjoy doing, working together on a project, taking a trip, just sitting and talking, or sitting and listening. Quality time is an expression of love.

Doing your children’s laundry, making them a special dinner, relieving them of their chores one day as a special favor and doing them yourself, wearing the chauffeur’s hat. Service is an expression of love.

Words of Affirmation – “I rejoice that I have confidence in you in everything” (2 Corinthians 7:16); “I thank my God upon every remembrance of you” (Philippians 1:3); “I know your works, love, service, faith, and your patience” (Revelation 2:19).

You can do it, I appreciate you, I’m proud of you, you’re special, you’re gonna make it, Jesus loves you, you’re good enough for me, I love you. Words of affirmation are an expression of love.

A new bike, a sought-after toy, clothes, music, a book, flowers, cards, letters, sports equipment, ticked to an event, a framed photograph, your time and attention_ Gifts are an expression of love.

If we read back through what each parent said about the absence of television in their homes, we will find a proliferation of these love languages tucked neatly into each of their experiences: tickling, wrestling, reading, washing dishes, folding clothes, eye contact, talking, and listening. These families are loving one another. Not just because they’re saying “I love you,” but because they’re doing things that say “I love you.”

God is concerned about relationships. The greatest of all the commandments concerns our love for God and our love for other people. As believers, shouldn’t we adopt a lifestyle conducive to developing intimate, loving relationships, especially with those who live in our own homes? Wouldn’t that be pleasing to our loving God?

The above article, “Family Ties That Bind” was written by Michelle Dangiuro. The article was excerpted from chapter eleven in Dangiuro’s book Powerful Effects Powerful Choices.