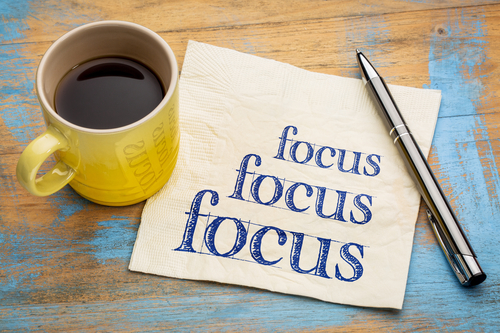 One man once said that if a person could focus for five minutes on any given thing, he could ultimately rule the world. While I find this claim hard to believe, it does bring up the interesting reality that the ability to focus on one thing is a rare trait. I believe that it is imperative, in this critical time, to develop this ability. Therefore, this month we will focus on focusing.

The greatest enemy of focusing is distractions. There have always been distractions, but the sheer numbers of our day are mind boggling. It is almost counterproductive to read the news every day, because there is seldom a day that passes when something does not happen, a statement or action of this evil society, that does not the spirit of each child of God. If I do not balance my news exposure some good God exposure (prayer and Bible reading), I will find my sermons beginning to sound too much Like the headlines. While social issues are important to the church and we must take a stand in this treacherous day, how we take a stand is of vital importance. Matthew 12:19 describes Jesus as one who did not shout or cry in the streets. In other words, he did pick up a poster and march in front the abortion clinic or movie theater.

Yet, no one in history took a stronger stand for morality or paid a higher price for his stand. To think that Jesus did not take a stand for truth is inconceivable. One must remain focused on the task before him. We will not change the direction of this society with picket signs, public debates, or politics. The only hope for changing this society is through the gospel of Jesus Christ. Do not interpret this as a statement against involvement in politics, because I wish that everyone of them was baptized in Jesus name and filled with the Holy Ghost. However, that statement in itself justifies the idea that conversion is the only hope for society. What is the best way to stop abortion? The gospel of Jesus Christ! What is the best way to reverse the moral decline, including the unprecedented acceptance and promotion of homosexuality? The gospel of Jesus Christ! I support any public stand against all sin and immorality, but like Jesus, I do not intend to shout in the streets. I intend to preach the gospel of Jesus Christ!

If we allow ourselves to become political in our approach we will end up preaching against homosexuals and not homosexuality. The Psalmist wisely said in Psalm 7:9, “Oh let the wickedness of the wicked come to an end.” We are not against the wicked. We are against wickedness. This is a point of focus! We cannot stray from this simple concept. Jesus Christ loved all sinners, even the ones we have defined as despicable. The reality is that all sin is despicable and Jesus died for all sinners. Truth was never meant to be a club to be used to beat the sinner to death. The Lord declared in John 8:32 that the purpose of truth is to “make you free.” Truth used for any other purpose is truth misused. He did not give us truth to win arguments. He didn’t give us truth to wound sinners. Jesus Christ gave us truth so that we could set people free! We are not preaching to win arguments; we are preaching to win people! It is a perplexing statement when considering the questionable life of Lot, but scripture says that “just Lot” was “vexed” at the filthy behavior of Sodom. (2 Peter 2:7)

I am vexed right now at the filthiness of America. I am vexed that good is being called evil and evil is being called good. I am vexed that politicians and other high profile people can promote homosexuality with impunity, while one brave Christian choosing to speak for the scripture is battered and abused. We do have an advantage. Satan will never invent a sin capable of satisfying the human soul. It never has existed and never will. So, while the world rants in the streets, imagining and inventing new sins as they did before the flood, the individual sinner will be left empty and in need. I do not claim that we will reach the majority of them, but when an adulterer, drug addict, alcoholic, or even homosexual walks through the door of my church, I will not assault him with political opinions, but I will try to reach him with the saving gospel of Jesus Christ. If I assault him as an individual before I share the gospel, I could well destroy the avenue to his heart. It may be difficult to do, but the most awesome thing we can do for these misguided people is love them. Love them and share the truth of Jesus Christ. This is my focus – I must stay focused on the only thing that can help him!

Stan Davidson has been senior pastor at Church on The Rock since 1984. He followed the call of God and left Louisiana College at the age of 19 to begin full-time ministry as an evangelist. Pastor Davidson has ministered in camps and conferences in several states, Canada and the Philippines. He is a regular contributor to ministerial magazines and UPCI youth projects. He has published a Bible study series, Sound Bible Doctrine, as well as four music projects. Pastor Davidson has been married to his wife, Cheryl, for over 30 years. They have two Daughters, Bethany McGlaun (Bret) and Deanna Thomas (Michael) and are very proud grandparents.