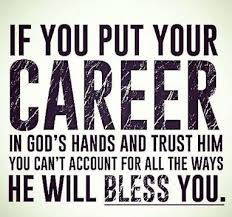 I have not lived a long life, yet I have lived enough to be able to pass on a little advice to those thinking about a career path: Go into whatever field God is leading you (or you think God is leading you) very open minded and flexible. While the current jargon among economists suggests our economy’s struggling situation is the contributing factor for the highly competitive job market, I believe it is God’s way of working in a mysterious way—at least this has been the case for me.

I started my journey a little over ten years ago, graduating from high school unsure which direction to go for college. Thankfully, colleges do not start pressuring for a major until the spring semester of the second year so I had time to work with my advisor on options. I finally narrowed my major down to either working with people as a psychotherapist or as a social entrepreneur (saving the world in some form or fashion). Building houses in Tijuana, Mexico, for lessthan-fortunate families solidified this career path of helping people in their greatest time of need. I received a Bachelor’s Degree in Science with a double minor in Sociology and Business Administration. It was while looking at Washington University master’s degree program that I realized this was going to be anything but a predictable story for me.

My family felt God’s leading to relocate to Houston, Texas—back to our family’s home state. Since it was going to be a fairly quick relocation process, it did not seem natural to start my master’s program and have to transfer or live on my own to finish it. In Houston, I was offered a position working with Edward Jones Investments in the HR department where I worked for a year. While it was a long shot from my intended profession, I embraced it as an opportunity to gain meaningful experience in the transition interim. By August 2008, I was back to pursuing “the goal,” successfully enrolled at the University of Houston, where I worked while also pursuing my graduate degree. After conducting a workshop at an International Peace Conference in Hong Kong, China, I was further convinced of my decision to work on the human psyche.

Two years later I graduated with my master’s degree with the ambition to study for the licensing exam, which would have led me to have the certification to either join a practice or start my own therapy practice. As I started down those tracks, God once again decided to “switch the rails” on me. While studying for the exam, I looked for work. Finally, an opportunity became available; however, it was not in my intended field. It was an opportunity with an airline company—Southwest Airlines. As I started my first day in their office, I could not help but marvel at God’s unique course of change for my life—again. One position led to another and before the start of my third year, I moved to Dallas, Texas, to take a position in the Southwest Airlines headquarters office, which is where I am today.

Since God is still doing great, unimaginable things in my life, this story has a “to be continued” ending. Each day brings an exciting feeling knowing that the best is yet to come. I encourage you to keep your chin up if you too find yourself on an uncharted path. Being guided by His hand is the safest, most secure place anyone could possibly find themselves—regardless of those “best laid plans.”

The above article, “Following God on a Career Path,” is written by Alicia Fletcher. The article was excerpted from May/June 2014 edition of Reflections Magazine.