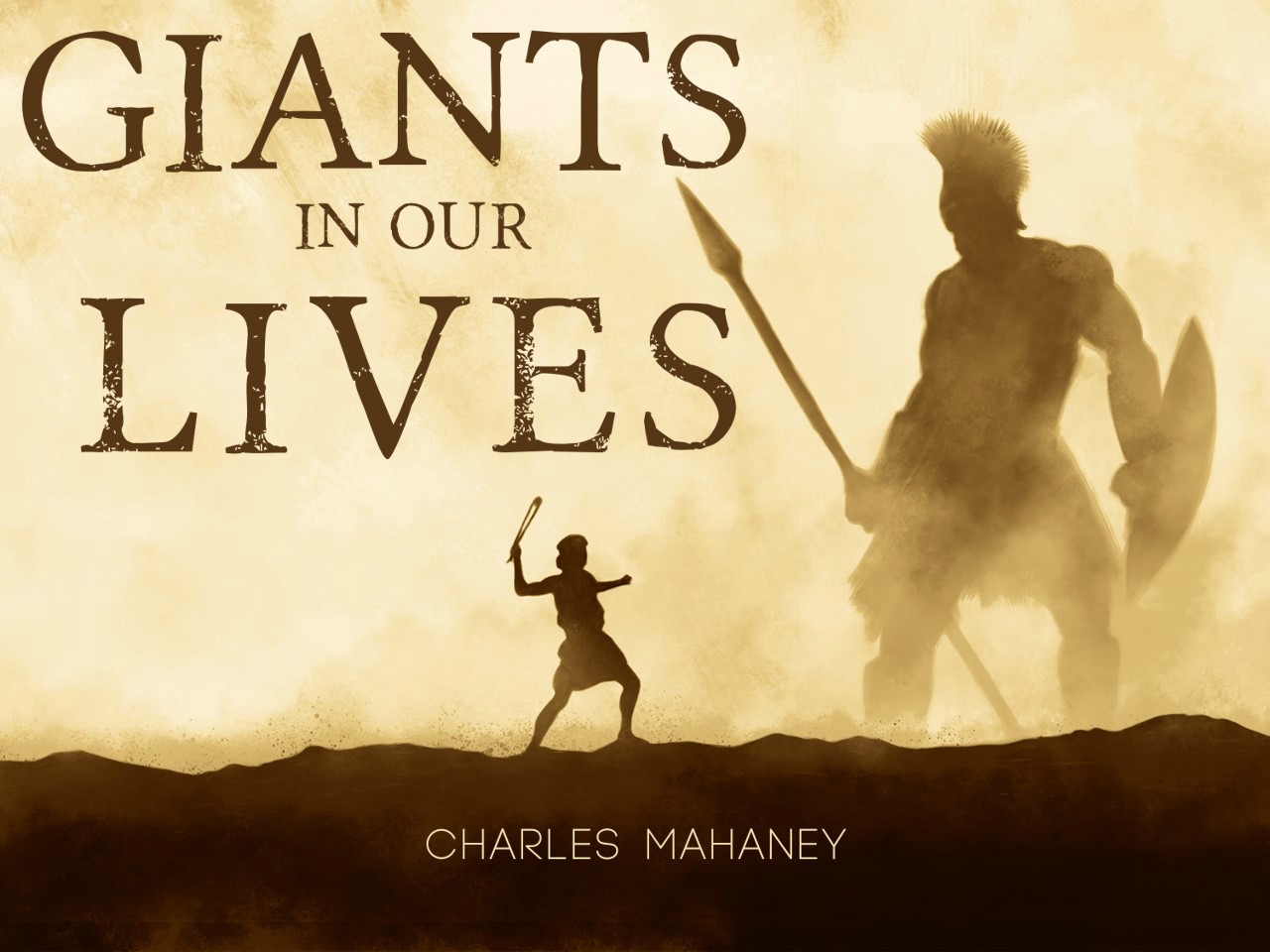 Looking at the life of King David, we see that Goliath proved to be one of the smallest giants David ever faced. Two armies faced each other: Is­rael and the Philistines. The rank of the enemy camp was broken when out came the scariest-look­ing warrior Israel had ever seen. A feeling of fear and inferiority gripped and paralyzed the entire army of Israel, but God had prepared David to lead Israel to defeat the imposing giant who faced and intimidated them. History and God’s Word tell the rest of the story. It was not the sling and the five stones that brought the giant down. It was faith in the almighty God. David never underestimated the strength of Goliath, but Goliath underestimated the strength of a man who knew and worshiped the God of heaven.

David faced many giants during his lifetime. Most were visible, but some were intangible. He faced jealousy, attack and rejection by his superi­ors, and lust. He also came from a dysfunctional family where rebellion and sibling rivalry took him to the brink of despair. However, no matter what came his way, David never lost his giant-killing faith.

We all face Goliaths of some kind in our lives. Substance abuse, divorce, and prison are only a few of them. Their shadow falls across our pathway to intimidate and bring feelings of inferiority. These giants, visible or invisible, paralyze us with fear.

To live under tyranny and dictatorship is a hor­rible thing, and it is humiliating to have to do things you do not want to do and to submit to indig­nity and indecency. Evil habits will place you in the clutches of anger, fear, and bondage.

Our minds have more to do with our well-being than most of us realize. Our thoughts can attack us and eat at our lives. I am glad God does not allow all the things we imagine and worry about to come upon us. These giants, who live in the chambers of our imagination, paralyze us with thoughts of inferiority. They are intruders, and they attack and accuse. These thoughts probe and search for weak­ness, and they have a great influence on our recov­ery. They enter our minds uninvited, but we must not allow them to take control because there is a direct relationship between right thinking and right actions.

Do not make the mistake of thinking Life Re­covery rests completely with God. We also have a responsibility in recovery. God has already done His part by providing us with Calvary’s victory. His sacrificial gift at the cross was completely ir­respective of person and absolutely free of cost. The reason people’s lives are not changed is not because God has something else to do. It is because they will not do what God expects them to do.

Stan’s choice weapon is against the mind. The twelve spies who went in to spy out the Promised Land came back and said, “There we saw the gi­ants.” Now notice the next statement: “and we were in our own sight as grasshoppers” (Numbers 13:33). We allow giants, visible or invisible, to make us feel like grasshoppers, and we throw up our hands and say, “What’s the use?” We are con­vinced, because of obstacles and these giants, that we can never change. There will always be trouble­some thoughts and giants that want to back us down and make us serve them. We may feel like grass­hoppers in our own minds. By the Life Recovery challenge, we can be free from these crippling in­fluences by “[girding] up the loins of [our] mind” (I Peter 1:13) and “bringing into captivity every thought to the obedience of Christ” (II Corinthians 10:5). Soon, thoughts of corruption, jealousy, fear, and doubt will appear less frequently. Spiritual growth and maturity are not automatic. When bound by sin and Satan, our minds are fertile fields for the seeds of sin. There are obstacles to over­come and an effort to put forth. We must give our minds through discipline to God and His Word. Itwill make the difference in failure or victory. The first commandment is that we love and serve God with all our “mind” (Matthew 22:37).

David in his later life became an experienced warrior. As he looked at his life, he said, “They . . . shoot in secret at the perfect: suddenly do they shoot at him, and fear not. They encourage them­selves in an evil matter” (Psalm 64:4-5). Your road to Life Recovery will also suffer attacks from snip­ing and undermining, just as the giant and his threats came at David. I Samuel 17:40 tells the se­cret of David’s victory. “And he took his staff in his hand, and chose him five smooth stones out of the brook.” He reached into his shepherd’s bag, placed the stone in his sling, and released it. Time after time in the Psalms of David, he talked about the rock, his rock. The Lord was the rock that smote the giant and scattered the enemy. David released the stone, and he won. We, too, must re­lease God’s power into our life situations.

The Scripture said David chose five stones. He only used one to bring down Goliath. What about the other four stones? In I Chronicles 20:4-8, the Philistines made war against David. Again, verse four says these who made war against David were “of the children of the giant.” One was named Sippai. He was Goliath’s son. Verse five says an­other made war, and he was “the brother of Goli­ath.” His name was Lahmi. In verse six, another son, who was a man of great stature and had six fingers on each hand and six toes on each foot, also came to fight. I believe the reason David chose five stones is not for some great theological reason. He simply knew the battle was not over just because Goliath was dead. There were other giants who also had to be subdued in his life.

The first giant’s name was Sippai, and it means “held at the threshold.” There are giants that will try to hold us back from walking through the threshold into the door of God’s great possibilities. Goliath’s brother in verse five was named Lahmi. His name means “warrior” or “taker of bread.” The man with six fingers on each hand and six toes on each foot is not named. But all through the Scriptures from Genesis to Revelation 13, the num­ber six refers to the man of sin. Six is also the number of man. David knew it was not just outside powers that would fight against him. He knew he was also a man, and his flesh, his humanity would have to be conquered again and again. Verse eight is so beautiful. It reads, “These were born unto the giant in Gath; and they fell by the hand of David, and by the hand of his servants. ” Men stood with David and helped him overcome the other giants in his life. One of the men who helped David was Sib-bechai, who became a hedge. His name means “enclosure” or “hedge.” Elhanan helped David conquer Lahmi. Elhanan means “God empowered” or “God anointed.” When the terrifying man with six fingers and six toes came against David, Jona­than slew him. The name Jonathan means “gift of God.”

From this point on, we can be like David. We can have God’s ways, His family, His ideas, His friends, His recreation, and His power and direc­tion in our lives. The kind of Life Recovery living that is directed in the challenge will get the job done. When we wrap ourselves in Calvary’s vic­tory, we begin to accept this world as seen through Jesus Christ. He brings order out of chaos, and peace out of turmoil because He doeth all things well. Jesus and your newly found brothers and sis­ters will help lift the burden and share the load. We must realize that we are part of His plan. We are atonement with Him. The Holy Spirit has a real place in our lives, and we have an atonement in the body of Christ.

After Calvary all the power of imperial Rome was unleashed against the infant church. However, something held them together during this period. We do not have to have any doubts about God’s intention for us. It is revealed in Christ and in the cross. Do not ever forget this: God has provided a means not only of growth and Life Recovery but also a means of defense. When circumstances at­tack, when the space around you seems thick with adversity, and when it seems like the old giants of the past come back threatening to pounce upon you, then you will know the full power of God and what the Joy of Recovery is all about.

The above article, “Giants in Our Lives” was written by Charles Mahaney. The article was excerpted from Mahaney’s The Joy of Recovery.

1 thought on “Giants in Our Lives (Entire Article)”