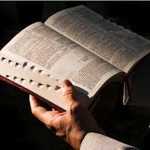 The Bible is the most precious of all human possessions. It is settled in Heaven (Psalm 119:89), and has been delivered to man. Angels have access to the Scripture in Heaven (Daniel 10:21). God proclaims He has magnified His Word above all His Name (Psalm 138:2), for it is in the Word that God’s glorious Name is revealed. Satan hates the Bible, and has tried many ways to destroy it. Burning it, changing it, making folks apathetic towards it and trying to discredit the validity of it are some of the ways Satan has attempted to lessen the impact of the Word on the world and yet, the Bible reigns supreme! All fields of inquiry, when properly contextualized, show harmonious agreement with the Words of Holy Writ. The Bible truly is an anvil that has worn out many hammers of antagonism towards it.

Two rather new translations of the Bible in the English language have obtained a foothold in parts of the Evangelical world. The English Standard Version (ESV) (completed 2001; revised 2007) and the New Living Translation (NLT) (completed 1996; revised in 2004 and again in 2007). They are part of a vanguard of new translations of the Bible in English, numbering nearly 200 that have been produced in the past 140 years. The Bible says, “Prove all things; hold fast that which is good:’ So with that in mind, we will look at these two modern English translations. In the ESV Old Testament, the Biblia Hebraica Stuttgartensia 2nd Edition (1983) was used, while in the NLT, the 1977 Edition of this volume was followed. In the New Testament, both used the UBS (United Bible Societies) 4th edition and the Nestles/ Aland 27th Edition of the Greek NT. The NLT, in its Preface, admits it deviated from this Text at times, at the Translators discretion. The Texts used underlying the translations are the problem, at least for those who believe in the divine preservation of Scripture (Psalm 12:6-7).

In the NT for example, there are somewhere around 8,000 differences between the textual sources of the ESV and NLT, and the Traditional Text of the New Testament. The Traditional Text are the underlying manuscripts which have been the accepted as standard and authoritative in Bible believing Churches in most languages for many centuries. So really the ESV and the NLT are translating from a different text than that which underlies traditional Bibles. Many of the changes are highly significant. The ESV lauds itself of being able to produce a reverse interlinear. It does so, but the text it’s translating from is Significantly different than the standard text found in the great majority of manuscripts for many centuries.

For example, Matthew 12:47 in a traditional text Bible, regardless of the language, would read: “Then one said unto him, Behold, thy mother and thy brethren stand without, desiring to speak with thee:’ In the ESV it would read – “__” blank, nothing, nada, nil. It skips from verse 46 to verse 48. Does this affect doctrine? Well, Jesus did say, “But he answered and said, It is written, Man shall not live by bread alone, but by every word that proceedeth out of the mouth of God:’ (Matthew 4:4). So I would assume that verse 47 has some intrinsic value to the human race, even if one wanted to quibble over its doctrinal significance. But if that were an isolated case, possibly you could take the remainder of the ESV on its supposed merits, and nitpick over one verse. This definitely is not the case, in the ESV or the NLT as we shall see. If we were to go to the NLT and the ESV in Matthew 17:21, and compare it to a Traditional Text Bible, the comparison would be thus: KJV, “Howbeit this kind goeth not out but by prayer and fasting:’ Reina Valera 1960, “Pero este genero no sale sino con oracion y ayuno. In the NLT and the ESV – cc “__”, it’s not there, missing, gone, poof.

The numbering system in the text skips from 20 to 22 in Matthew 17 in the ESV and NLT. It’s just gone, based on humanistic, faulty textual critical methods, which don’t believe that in faith the Bible existed somewhere on earth from the 1st century until now. Again we could do this repeatedly with entire verses, paragraphs, phrases, and words missing in the ESV and NLT. Early scribes against the Apostolic faith would delete words and phrases in an attempt to prove their particular doctrine or belief. These faulty manuscripts were then abandoned and unused for centuries, until discovered in our times. A Bible that is used gets worn out. One that is ignored is preserved. These changed manuscripts were preserved due to their errors. Yet, these newly found manuscripts don’t even agree amongst themselves. So it is left in the hand of evolutionary, mostly non-Christian critics, to subjectively reproduce what they feel is something close to the original manuscripts of the Holy Scripture.

That’s just the tip of the iceberg. A few of the other discrepancies and deletions are: Phrases of how we are to treat our enemies are deleted from Matthew 5:44 The Lord’s Prayer is shortened in Matthew 6:l3 & Luke 11:2-4 Phrases are left out in Matthew 20:16,22,23, 24:36. A large part of Mark 6:11,7:8,9:46 is missing. Mark 10:24 removes a phrase and totally changes the meaning to false doctrine. Mark 14:19 and Luke 1:28 leave out important phrases. In Luke 9:55, 56, this is omitted in the ESV and NLT, cc… and said, Ye know not what manner of spirit ye are of. For the Son of man is not come to destroy men’s lives, but to save them:’ Luke 11:11 omits the phrase by Jesus concerning receiving the Holy Ghost, “If a son shall ask bread of any of you that is a father, will he give him a stone?” Romans 8: 1 leaves out “… who walk not after the flesh, but after the Spirit” greatly promoting “once saved always saved” in the text. I Corinthians 6:20 omits, “… and in your spirit, which are God’s” totally changing the meaning of the verse. Galatians 3:1 omits the following phrase, which is very important for the teaching of Apostolic doctrine, “… that ye should not obey the truth…” Ephesians 5:30 and Philippians 3:16 omit highly significant portions of the text. I Timothy 6:5 omits, “… from such withdraw thyself” affecting the great doctrine of separation.

Friends, there are dozens of other examples that could be shown. I conclude with a brief look at some other aspects of the ESV and the NLT. The ESV is claimed to be a revision of the Revised Standard Version of 1971. It only changed 6 of the RSV’s text. It had to obtain permission from the ultra -liberal World Council of Churches to get the copyright to use the RSV as the basis for the new translation. You may remember the RSV as being condemned universally in the early 1950’s in its original edition as an edition translated by communists, communist sympathizers, and atheists. A Position Paper was inserted in another Apostolic organization’s manual stating a vehement objection to it due to its attacks on the deity of Jesus and other assaults on the Christian faith. This was not an isolated case, as Bible believers of all creeds rejected this humanistic liberal translation. A bad tree cannot produce good fruit. The ESV has a humanistic and modernistic basis. It may claim to be a literal translation, with a reverse interlinear available. But it is translating from an incorrect set of humanistic manuscripts, so this negates its effectiveness.

Much the same holds true for the NLT. While the ESV has only been updated once in unspecified ways in 2007, the NLT has already gone thru 2 revisions from its inception in 1996 (2004 and 2007). The NLT comes from Kenneth Taylor’s paraphrase of the ASV of 1901 called the Living Bible. Billy Graham popularized it in the 1960’s, being handed out at his crusades. I have met Kenneth Taylor. He speaks in a whisper. A July 1972 Time magazine article reports that a psychiatrist says this is Kenneth Taylor’s self- punishment for tampering with God’s Word. The NLT definitely comes from a bad tree system. In conclusion, with just a brief, cursory look at both the ESV and the NLT in this article, it seems to me they are weighed in the balances and found wanting. Among English speaking people, I would stick with the King James Version of the Bible. Hard to read you say? Much easier than Shakespeare, and nobody tries to dumb it down. The average syllable length of a word in the KJV is 1.39 syllables – incredibly simple.

The average word in the KJV is 3.968 letters – you can’t get any Simpler than that. With the endtime rapidly approaching, and evil men and seducers waxing worse and worse, deceiving and being deceived, I wouldn’t want to change my sword in the midst of the battle. A quote by Franklin Logsdon, who wrote the Preface to the New American Standard Bible seems in order here. He wrote: “J must under God renounce every attachment to the New American Standard, … I’m afraid I’m in trouble with the Lord We laid the groundwork; J wrote the format; J helped interview some of the translators; I sat with the translator; I wrote the preface … I’m in trouble; I can’t refute these arguments; its wrong, it’s terribly wrong; it’s frighteningly wrong; and what am I going to do about it? … I can no longer ignore these criticisms I am hearing and I can’t refute them … When questions began to reach me at first I was quite offended.

However, in attempting to answer, I began to sense that something was not right about the NASV Upon investigation, I wrote my very dear friend, Mr. Lockman, explaining that I was forced to renounce all attachment to the NASV … The product is grievous to my heart and helps to complicate matters in these already troublous times. The deletions are absolutely frightening … there are so many … Are we so naive that we do not suspect Satanic deception in all of this? .. .I don’t want anything to do with it … The finest leaders that we have today .. haven’t gone into it [the new version’s use of a corrupted Greek text], just as I hadn’t gone into it … That’s how easily one can be deceived … I’m going to talk to him [Dr. George Sweeting, then president of Moody Bible Institute] about these things … You can say the Authorized Version [KJV] is absolutely correct. How correct? 100 correct! … If you must stand against everyone else, stand.” – Dr. Frank Logsdon Personally, I will stick with the Bible that gave the world political freedom with the Constitution and the Declaration of Independence.

The Bible that Cook and Ewart used to proclaim Jesus all over America and then it went all over the world. The Bible that G.T. Haywood saw the truth in, and left the AOG to follow the Truth of the Word of God. Yes, here in the endtime, I think I’ll just cleave my hand to that sword that still works to save souls and defeat the devil. I think that sword can still give us the greatest revival since Pentecost, instead of the confusion of tongues in Polyscripturae that reigns over the religious landscape in America today. The KJV is the most cutting edge progressive, powerful tool for revival among the English speaking peoples. Use it, don’t change it or make fun of it. With a weapon that has lasted the centuries, and still unifies the English language, it is impossible that we will lose this war. It has defeated Satan for centuries, and will continue to do so if used properly. Amen!

Steve Waldron is the pastor at New Life of Albany in Georgia.