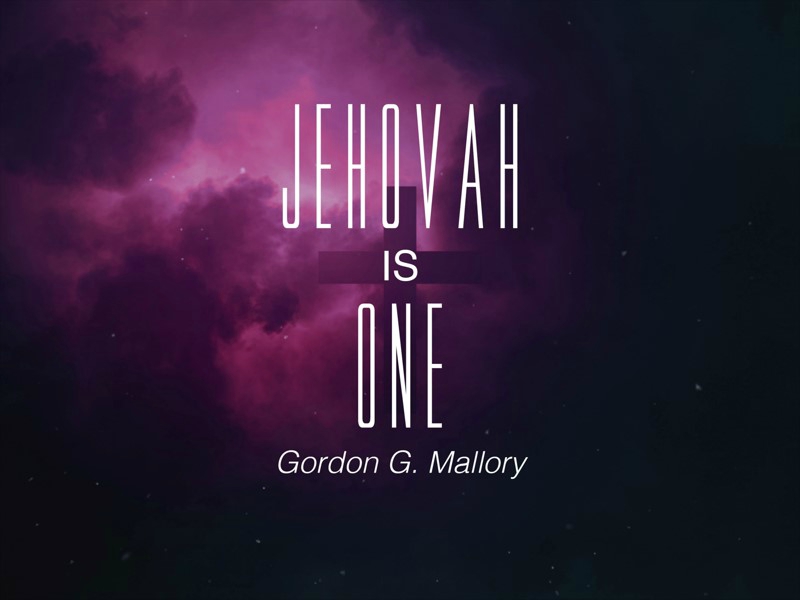 Then there were the fundamentalists of that day who acknowledged Jesus as God. Within that body of believers were those who could not reconcile the Deity of Christ with the truth of The One God. To break through that barrier and to refute the Arian philosophy, the Nicene Creed was put forth in its earliest form by what was known as the Council of Nicea in 325 AD.

The devout Jewish home is identified at the door by the “Mezuzah” fastened to the doorpost. This is a small case of metal or wood, which contains a parchment roll called the “Shema,” written in Hebrew script. The Shema contains the verses of Deuteronomy 6:4-9 (Old Testament), affirming that God is One. Upon leaving or entering his house, the pious Jew touches his fingers to the Mezuzah and then to his lips. He then repeats the words, “Hear, 0 Israel, Jehovah our God is one Jehovah” (American Standard Version).

We would particularly note that Jehovah’s injunction to love Him “with all thine heart, with all thy soul, and with all thy might” is preceded by the revelation of: (1) His Name; and, (2) the revelation that He is One Jehovah. Thus God establishes the foundation of man’s relationship to his Creator upon his knowledge and understanding of The One True God, as contrasted with the many gods of the heathen people and nations whose names were called upon by their worshippers.

For 2000 years Jesus has been the most controversial figure in the history of the human race. After three and a half years of earthly ministry, the religious leaders of His day demanded that He be crucified. Pilate testified to the Jews, “I find in him no fault at all” (John 18:3 8). Though Pilate “knew that for envy they had delivered him” (Matthew 27:18), his greater concern for his own political prestige caused him to appeal to the mob with the question, “What shall I do then with Jesus which is called Christ?” (Matthew 27:22). That ringing question has called every person within hearing of the Gospel message.

History records that the Church moved steadily toward apostasy and confusion after the passing of the original Apostles. Typical of that confusion was the controversy regarding baptism, which manifested itself in baptism being administered with one dip or three dips in water, in still or running water, face first or back first into the water, by immersion or sprinkling, and finally as infant baptism. This controversy remains with us today.

The most critical and significant issue of that day centered upon the historic question, “What shall we do with Jesus?” The importance of the issue lies in the fact that Jesus is the ‘key’ to the understanding and acceptance of the message of The Name of The One True God.

As is true today, there were those who accepted Jesus only as a man. Those who reject Jesus as God are not involved with the plural – God teaching, such as the Unitarians, Jehovah’s Witnesses and Jews who all have two things in common: (1) they reject Jesus’ divinity; and, (2) they worship one God.

A major obstacle to the conversion of the Jews is the doctrine of the Trinity, which the Jewish people treat as plural-God worship. it is unfortunate that many Christians believe that a Jew must be converted to the Trinity to be saved. Rather, a Jew, as is true of all men, must believe that Jesus was “God manifest in the flesh.”