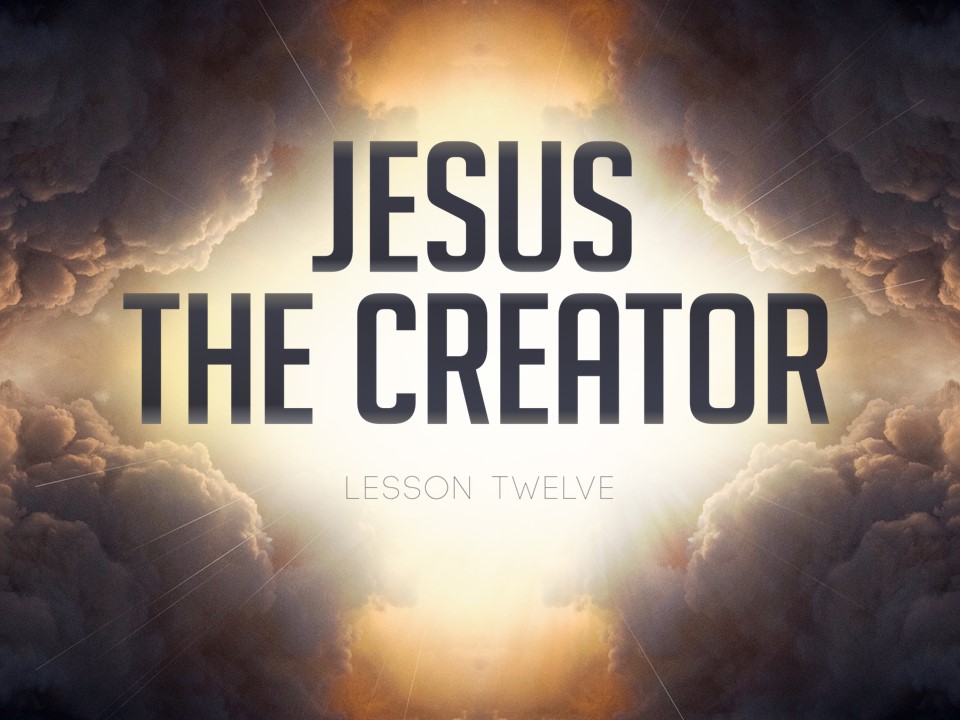 JESUS IS THE MIGHTY CREATOR:

Only God can create. The divine prerogative of being able to create is exclusively reserved for the one, true, Almighty God. On many occasions Jesus showed that He possessed this prerogative and thus proving His Deity. The miracles of turning water into wine and multiplying the loaves and fishes were miracles that only the Creator could do. The two miracles studied in this lesson also prove that Jesus is the mighty Creator.

Apart from the miracles there are many Scriptures that clearly state the Jesus is the Creator. “All things were made by him; and without him was not any thing made that was made” (John 1:3). “He was in the world, and the world was made by him, and the world knew him not”  (John 1:10). “For by him were all things created, that are in heaven, and that are in earth, visible and invisible…all things were created by him, and for him. And he is before all things, and by him all things consist” (Colossians 1:16-17). “Thus saith the Lord, thy redeemer, and he that formed thee from the womb, I am the Lord that maketh all things” (Isaiah 44:24).

“For thy Maker is thine husband; the Lord of hosts is his name; and thy Redeemer the Holy One of Israel” (Isaiah 54:5).

CIRCUMSTANCES:
In this miracle we see the dual nature of Jesus brought out very clearly. His weariness and exhaustion reveal his humanity; His Deity is revealed as the great Creator stilling the stormy sea.

Jesus had spent a strenuous day teaching the multitudes. Many healings had taken place and Jesus was exhausted physically. It was impossible to get away from the crowds, so Jesus suggested, “Let us go over to the other side of the lake.” This would be a trip by boat of some seven miles. They got into the boat without any preparation and without taking any provisions. Jesus got into the boat “just as He was” and immediately lay down in the stern of the boat and went to sleep. This is the only time we read about the sleep of Jesus. His physical being was completely overcome by exhaustion and weariness.

Everything went well until they were in the middle of the lake. Suddenly the heavens grew dark and a wild wind swept down the Jordan gorge. The disciples sought to weather the gale but every moment the storm grew worse. Their condition seemed hopeless and everything they did seemed to be in vain.
In the face of death they grew very fearful. They rushed and shook Jesus who had been sleeping through it all. “Master, carest thou not that we perish?” Jesus stood up in the midst of the roaring waves and howling storm and rebuked the storm. He commanded the wind and the waves as if they were human beings or animals.
NEED:

The disciples were fearful that they were going to drown in the midst of a howling storm. Certainly the danger was great.

HOW WAS THE MIRACLE PERFORMED?
This miracle was performed simply at the command of the Lord. He spoke and the elements obeyed Him. Jesus then turned and rebuked His disciples for their unbelief.

RESULTS AND THE LESSON TAUGHT:

We are reminded of creation when God spoke and everything was created simply by His word. It was the very same One speaking from the stern of the boat in the middle of the Sea of Galilee.

The disciples were fearful but they did not have faith. This lesson teaches that faith and fear cannot be in your heart and the same time. If a person believes God he will not be afraid.

Jesus was Master even when He was asleep. With Jesus in the boat it was impossible for the boat to sink. The other little boats that crossed over too could have sunk, but definitely not the one in which Jesus was asleep.

Jesus had sent His disciples across the Sea of Galilee in the evening while He remained behind to pray. It was night and while they were crossing a terrible storm arose. This time Jesus was not with them to quiet the wind and waves. They had to struggle against the adverse wind but in spite of their hard rowing they made little headway.

Jesus spent the night in prayer but He knew the struggle His disciples were having. While they were struggling with the waves, He was struggling in prayer. Finally in the fourth watch, between three and six o’clock in the morning, Jesus went to them walking on the water.

The disciples were worn out struggling with the storm and needed to be encouraged.

HOW WAS THIS MIRACLE PERFORMED?

Jesus went to His disciples help in the hour of their desperate need. He came with peace and reassurance. He said to them, “Be of good cheer. It is I, be not afraid.”

Very likely desiring to be the first to reach Jesus, Peter cried out, “Lord, if it is really you, order me to come to you.” Jesus simply said, “Come.” Peter immediately stepped out on the water. As long as he kept his eyes on Jesus, He was able to walk on the water. When he took his eyes off Jesus and began to look at the waves, he began to sink. When he cried out for help, Jesus took hold of him and pulled him up. At the same time Jesus rebuked Peter for his little faith.

RESULTS AND THE LESSON TAUGHT:

The fact that Jesus was able to walk upon the water is another proof that Jesus is the mighty Creator.