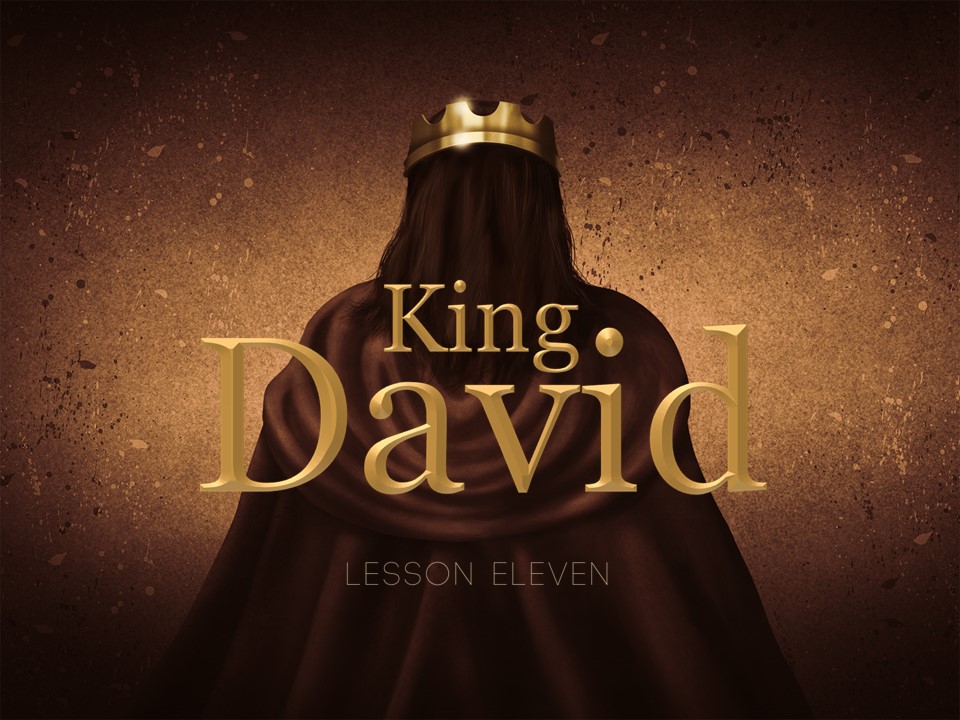 David was the eighth and youngest son of Jesse, of the tribe of Judah. Jesse was the grandson of Boaz and Ruth.

David was born at Bethlehem, six miles south of Jerusalem. He was born about 1080 BC. Here at Bethlehem, Jesus was born over 1,000 years later. Ramah, Samuel’s headquarters, was only a few miles from Bethlehem, and undoubtedly Samuel’s character and teaching had influenced this area.

David’s job as a boy was being a shepherd. He became known for his skill as a shepherd boy and a musician with a harp. This background taught him to have a love of nature and brought him into fellowship with God.

David was not tall and handsome like his oldest brother, Eleah, but he was ruddy and had beautiful eyes. He had a pleasing personality and won the hearts of others. He was of blonde complexion and as such he contrasted with others about him who was dark skinned. As he grew up he became a man of God: bold, patient, talented and skilled in war. He was a great King, a great warrior, a great poet and a great religious reformer.

B. THE ANOINTING OF DAVID:

When Saul was rejected by God, Samuel was given instructions how to anoint another one to take his place. He was to go to Bethlehem and anoint there a son of Jesse. Jesse brought his sons before him and God refused each. David, the eighth and youngest, had been left to care for the family sheep. Samuel insisted that he is brought and God showed him that this was the one. As Jesse and the other seven sons watched, Samuel then anointed David to be Israel’s second King. He was probably about fifteen years of age, at that time.

The appearance of David contrasted sharply with that of his brothers, and it is here that we have the well-known statement recorded: Do not look on his appearance, or on the height of his stature, for the Lord sees not as man sees, man looks on the outward appearance, but the Lord looks on the heart (I Samuel 16:7). This lesson teaches us that we cannot always judge a person by the outward appearance. It is good to know that God sees both the outer and inner appearance of a man.
David was not only anointed by oil, but also the Holy Spirit anointed him. The Spirit of the Lord came upon David from that day forward (I Samuel 16:13).

David’s well-known victory over Goliath took place in the valley of Elah some fifteen miles southwest of Jerusalem. The Philistines had invaded Israel. Instead of the two armies engaging in battle, the giant Goliath came forth as the champion of the Philistines. He challenged the Israelites to send forth their champion; taunting the people of Israel. The practice of letting a single champion on each side settle the issue, was common in ancient days.

Goliath was a member of the Anakim race of giants. He was about nine and one half feet tall and wore a coat of mail weighing 157 pounds. For forty days he challenged Israel and the Israelites were greatly afraid of him. On the fortieth day, David heard his challenging words. He had come to visit his three oldest brothers and to bring them food. When he heard the insulting words, of Goliath, he was astonished and cried out: “Who is this uncircumcised Philistine that he should defy the armies of the living God?” Saul heard these words, he sent for David and David convinced the King that his exploits with the bear and lion while he kept his father’s flocks made him equal to this fight with the Philistine who dared insult Israel’s God.

A somewhat comic scene took place when Saul tried to have David wear his armor. However, David laid this to one side and picked up his familiar staff and sling and with five smooth stones from the brook, went forth to meet the Philistine. Goliath was insulted when he saw David who appeared to be such an unlikely opponent. Goliath was covered with armor from head to foot and with a shield bearer before him.

However, David went forth, not in his own strength but he went in the name of the Lord. David said, ” I come to you in the name of the Lord of hosts, the God of the armies of Israel that all the earth may know that there is a God in Israel.” One stone was all that David needed. It struck Goliath in the one open place – on his forehead. He fell stunned, to the ground, and David quickly killed him, cutting off his head, with his own sword.

This was a day of defeat for the Philistines and a tremendous victory for Israel. It had been accomplished in the name of the Lord of hosts. A lesson that we should remember from this is that our victories, even today, are won in the name of Jesus.

As a young man David had ministered to Saul as a minstrel. Saul had frequent times of great depression and melancholy. David was well known for his ability to play the harp and to sing. David was sent for and as he ministered to Saul, Saul was helped. In the beginning he was fond of David, but became very jealous of David following the slaying of Goliath.

After the victory over the Philistines, the women came out of the cities, singing and dancing to meet King Saul but their song made Saul very angry. They sang this song: Saul has slain his thousands and David his ten thousands. Saul’s jealousy of David was aroused and from that day he sought to kill him on every occasion. Saul made at least five attempts to kill David while he was connected with his court. Finally David had to flee for his life and David became a fugitive.

David won the friendship and love of Jonathon. Jonathon was Saul’s son and was one of the greatest characters of the Old Testament. The friendship and love that existed between Jonathon and David remains to this day a great inspiration to us all. The two men were as one. It was a friendship of the warmest kind, and also pure. Jonathon did all he could to soften Saul’s jealousy of David and tried to dissuade Saul from his murderous plot @aka
When he failed, he entered into a covenant with David to protect him and to inform him of Saul’s secret movements. Jonathon asked nothing of him except that he would be kind to all his kindred when he should come into his kingdom.

This friendship must have had an effect upon David for it showed him how noble a king would have succeeded Saul in ordinary course. It must have inspired him to be a man as good, or greater, than Jonathon.

F. DAVID’S LIFE AS A FUGITIVE:

When David fled from Saul he became a fugitive, legally an outlaw, hunted by the King. When David bade farewell to Jonathon he went first to Nob where Ahimelech served as high priest at the tabernacle. Here David received some of the sacred bread for food, Goliath’s sword for a weapon and an indication through Ahimelech of God’s will.

David then went to the Philistine City, Gath. He was recognized and fained madness that he might escape harm.

He returned to his homeland and took up residence in a cave near Adullam where he began gathering a protective force of men. He was within ten miles of his home in Bethlehem and he was able to make known his desire that men should join him. Four hundred men responded: men described as being in distress, in debt and discontented. Undoubtedly, many were political refugees. When he had the band assembled David moved east to Moab, taking his parents with him. David learned that the Philistines were attacking the inhabitants of Keilah. Desiring to make friends, he went to the relief of Keilah and helped defeat the Philistines. However, the people of Keilah were going to turn him over to Saul. David then moved southward to the region of Ziph, below Hebron. Here Saul made his first attempt to seize David. David then moved east to Engedi, on the shore of the Dead Sea, where Saul again pursued him. It was here that David spared Saul’s life for the first time. Saul had entered the cave where David was hiding and David could have killed him but instead, he merely cut off part of Saul’s clothing for evidence of his nearness.

David next moved to the region of Maon. Here he sought food for his men from a wealthy landowner, named Nabal who lived near his camp. Nabal was a surly person and refused to help him. When David prepared to punish him, Nabal’s wife, Abigail, intervened and supplied food. Nabal died ten days later and David then took Abigail as his own wife.

The Ziphites told Saul of David’s hiding place and Saul came and for a second time, David spared his life. David, accompanied by Abishai, went to where Saul slept under the guard of Abner and the army. David took away Saul’s own spear and jug of water. The next day, Saul shown the articles by David, repented and promised not to pursue David any longer.

David moved to the land of the Philistines and succeeded in having residence at Ziklag. Here he served the Philistine King as a mercenary, attacking the foreign tribes on the south. When the Philistines were to fight Israel, David found himself in difficulty. However, he was saved from the embarrassing position when the Philistines themselves objected to his presence and he was sent home to Ziklag. When he reached Ziklag, he found that the Amalekites had destroyed the town and taken his wives and the wives of all his men and much booty. David’s men now came near mutiny. David save the situation by acting quickly, finding out the location of the Amalekites, David attacked them and recovered both wives and booty. David remained in the land of the Philistines for sixteen months.

Upon the death of Saul, the outlaw life of David came to an end. During his life as a fugitive, David had many bitter experiences but undoubtedly these trials taught him  profitable lessons, which caused him to be a greater and nobler king.

When Saul was killed David sought God’s guidance, left Ziklag and returned to Hebron. Here the people of Judah anointed him King. This was quite logical for David was well known in Judah. Many of his men came from Judah and he had been their champion for many years. There were familiar with his ability and leadership, warfare, and were glad to make him King, one in whom they could place confidence. David was crowned King of Judah at Hebron in the year 1014 BC. David ruled over Judah for seven and one half years.

After the death of King Saul, Abner, captain of the hosts, encouraged Saul’s son, Ishbosheth to accept the kingship and he was crowned King of the northern and eastern tribes. His capital was in Gilead but Abner in Gibeon was the actual ruler. Civil war between Israel and Judah resulted, and Judah always prevailed. Finally, Abner deserted Ishbosheth and joined himself unto David, but Joab murdered him. Soon after this Ishbosheth was murdered by two of his servants, and then David was anointed King over Israel too. The civil war came to an end and David became King over the United Kingdom. He ruled thirty-three years over Israel
making a total reign of forty and one half years.