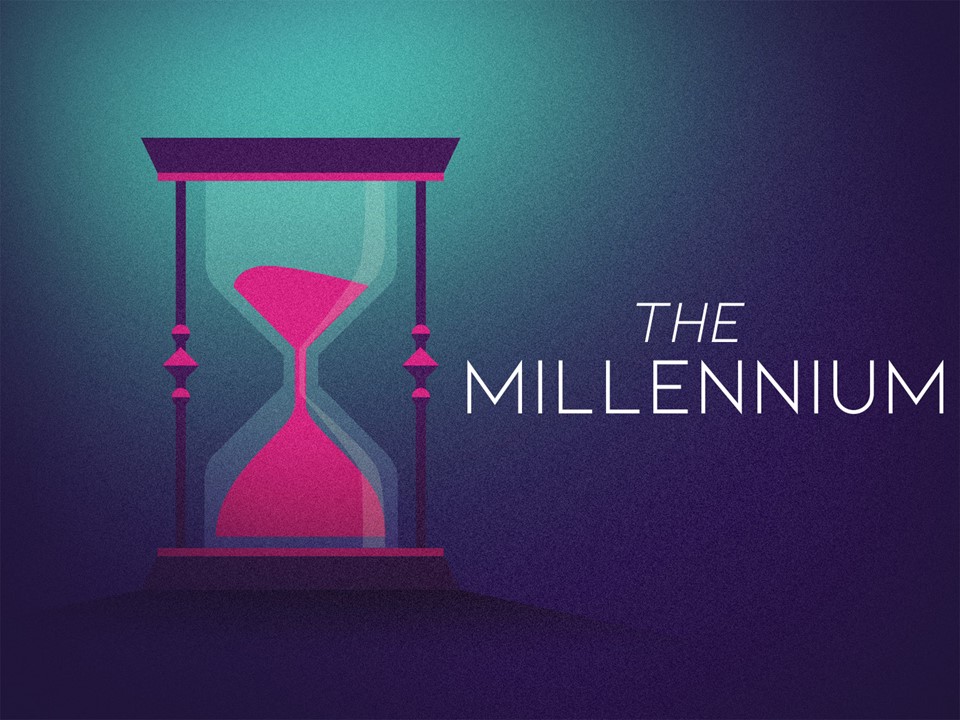 The Millennium: (Revelation 20:1-6)
• The word “millennium” means “one thousand years”
• It comes from two Latin words: 1) mille – one thousand and 2) annum – year
• Some people claim that the millennium is not to be found in the Bible
o However, here we find one thousand years mentioned six times in six verses
• In recent years a doctrine which is known as “A-millennialism” has been taught much
o The term “A-millennialism” simply means “No-millennium”
• The only way one can reach this interpretation is by the spiritualization of the Scripture
o This is a very dangerous way of interpreting Scripture for through this method all Scripture can be explained away
• Literal interpretation is the only safe way of understanding Scripture
o One thousand years means one thousand years. When the Bible states that the children of Israel wandered in the wilderness forty years, it means forty years
• Many a-millennialists are liberal in their thinking and conduct, and also accept the doctrine of unconditional eternal security of the believer
• Pre-millennialism is Scriptural and the early church for 300 years was unanimous in holding this view
o The Bible is very clear on the fact that Christ will return to earth to reign for one thousand years
• This is the seventh day in God’s week of seven millennia. During the millennium the curse is lifted and the earth rests from the suffering under the yoke of bondage of the devil for six thousand years
• In creation God rested on the seventh day not because He was weary, but rather because His work of creation was complete
o Here God’s work of redemption will be completed when He presents the church to Himself and lifts the curse from the earth

Satan Bound: (Revelation 20:1-2)
• One thousand years of peace would be absolutely impossible as long as the devil was free to continue his work of deception
o To bring in the millennial reign the Lord has to purge earth of all opposing forces.
• The first act will be to cast alive into the lake of fire the beast and the false prophet
o The lake of fire was prepared for the devil and his angels (Matthew 25:41)
• Three and one half years earlier the devil was thrown out of heaven (Revelation 12:9-10)
o Since the very beginning he has had access to the throne of God where he accused the saints day and night (Job 1:6)
o Now God has the devil bound and imprisoned in the bottomless pit that the earth might enjoy peace, and that Jesus might reign supreme
o The name devil means “slanderer and liar.” The name Satan means “enemy or adversary”
• In the Bible he is called devil, Satan, apollyon (destroyer), dragon, serpent and many other titles which denote his sinister character
o His greatest work is that of deception
o During the millennium he will be unable to deceive the nations any longer (Revelation 20:3)
• The Bible does not name the angel who binds the devil but certainly he must have great power and authority
• A-Millennialism would teach that the devil was bound at Calvary, and is now bound.
o The fallacy of this teaching is shown by the fact that when he is bound he will deceive the nations no longer (verse 3)

The Short Season:
• Satan will be released from his prison and for a short season will again tempt and deceive the nations
• Many might ask the question, “Why loose him now that he is bound?”
o This short season of testing must take place for the same reason that the tree of knowledge of good and evil was placed in the Garden of Eden
• When Satan is loosed he deceives the nations once more and leads a rebellion against God
• Planet earth is purged with fire (II Peter 3:10-13) and life as it is now known upon earth comes to an end
• At this judgment the devil is thrown into the lake of fire to join the beast and false prophet (Revelation 20:10). He shall be tormented forever and ever

The Resurrection:
• In Revelation chapter twenty both resurrections are mentioned:
o First Resurrection before the millennium begins; Second Resurrection at the close of the millennium
• It should be clearly kept in mind that the First Resurrection is the Resurrection of Life, but it takes place in three distinct stages:
• Jesus and the Old Testament Saints (I Corinthians 15:23, Matthew 27:52-53):
o It should be noted that these Old Testament saints arose after Christ’s resurrection
o They will be in the kingdom with the church but will have a subordinate roll
o Undoubtedly they will be guests at the Marriage of the Lamb.
• The Church (I Thessalonians 4:16-17):
o The church is the body of Christ and is the bride at the Marriage of the Lamb
• The Tribulation Saints (Revelation 20:6): These will serve and govern in the millennial
kingdom but like the Old Testament Saints will be guests at the Marriage of the Lamb
o The term “First” in relation to the resurrection has no reference to actual order but only as it is contrasted with the General Resurrection
• The Second Resurrection will take place just prior to the White Throne Judgement.
o Everyone who has not been resurrected will be raised at this time
• It is interesting to observe that there are at least four individuals who will not be resurrected in either resurrection
• Enoch and Elijah: They were translated and were caught away into the presence of God without having to await resurrection in Paradise
• Beast and False Prophet: They were thrown alive into the lake of fire without experiencing natural death and going to Hades
o They are the only two lost souls who apparently will not appear at the White Throne Judgment

The White Throne Judgment: (Revelation 20:11-15)
• This is the final judgment of all men who have no part in the first resurrection
o None shall escape from Adam to the last man killed in the final battle of God and Magog
• The throne is described as being great and white
• All will stand before a great Judge and none will escape
o The judgment will be righteous, just and fair. The greatness and whiteness suggest power and purity
• There are at least three different books opened here (Revelation 20:12). Undoubtedly these books are:
o The Word of God;
o Book of remembrance where a record of man’s life is kept;
o Book of Life
• There are two things considered in this final judgment:
o Works: Every man will be judged according to their works;
o Book of Life: If a person’s name is not found in the Book of Life he is thrown into the Lake of Fire
• It is at this time that two things come to a complete end: death and Hades
o Death is the end of life here upon earth as far as a man’s body is concerned;
o Hades is the prison house for the spirits of lost souls awaiting resurrection
o It is clearly stated that the last enemy to be destroyed is death, and therefore there will be no more enemies. “The last enemy to be destroyed is death” (I Corinthians 15:26)