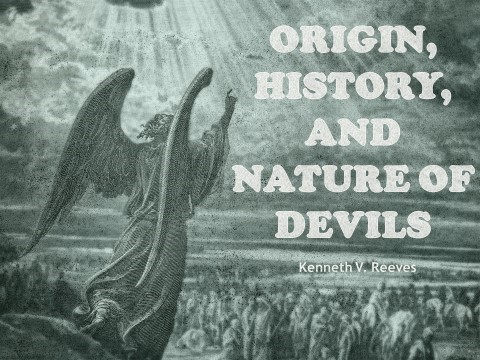 In the subject of demonology, we are inclined to think of casting devils out. But, there is much more to the subject of demons than just casting them out. There is a need to know what kind of a nature they have, the work they carry on, and how they lead people to be liars, to tell lies, and to act lies; for he is a liar. Nov, a liar can do a lot of damage, and Christians should take heed to the scripture which tells us not to lie one to another.

We do not read that there is more than one devil until we come to the New Testament. There we find many devils, even a legion of devils in the case of the maniac of Gadara. To John, the Lord revealed that Michael and his angels fought against the dragon and his angels. These fallen angels are the devils that are manifested throughout the New Testament. These devils are said to be able to encompass, as well as dwell inside a human being. This means that they would have the ability to compress themselves into a small area, such as that number called legion crawling into one human being. If the chief devil is a fallen angel, then the other devils must be fallen angels. In that case, we know there must be a large number of these angelic demons.

The question arises about their fall and the time of their fall. The Bible tells us in John 8:44 when Lucifer became the devil. From what we gather from other scriptures, it was after this that the other angels were led by the chief of devils to follow his false course of action. John 8:44 reads: “Ye are of your father the devil, and the lusts of your father ye will do. He was a murderer from the beginning, and abode not in the truth, because there is no truth in him. When he speaketh a lie, he speaketh of his own: for he is a liar, and the father of it.”

He was a murderer from the beginning. Now when you talk about the beginning, that could have conceivably have been after Genesis 1:1 and before Genesis 1:3, because as you may know, archeologists have found bones, skeletons, and other evidences of creatures that may have lived many millions of years ago, encrusted in the earth! It has been my theory that in the beginning, or right at the dawn of creation (Genesis 1:1), and before Genesis 1:3 where God said “Let there be light”, there may have been millions and minions of years. It has been my opinion that Satan was in charge of angelic beings, and together they ruled over the earth during that time unrecorded in scripture. But his heart was lifted up with pride. By the seduction of these angels with him, they made an attack upon the very heavens to claim a throne like the Most High God. But God wrought great judgment upon them when He stirrer” the water and earth together in the judgment. There was a wrapping of ancient creatures with the vegetation inside, as if mixing things with flour and water in a bowl. The skeletons with the hydrocarbons we find in the earth as oil or coal may be the results of that judgment.

There apparently was a great battle that took place that reduced Satan and his angels to the defeat he sustained. For at the time God put man and woman in the Garden of Eden, the Serpent was already in the earth and was an enemy of God and man. When Lucifer became the devil is said by Jesus to have been from the beginning, whenever that period was. It had to have happened before man was made.

In Genesis, chapter three, only one devil is identified and called the Serpent. The over fifty million demons that exist were not made known to us in Genesis, chapter three. This is one third of the total angels of God. Revelation, chapter five, reveals that there are ten thousand times ten thousand plus thousands of thousands of God’s angels. This means the fallen angels, numbering one out of three, would add up to over one hundred fifty million original angels of God. How many more than this we do not know, for the angels are actually innumerable, as Hebrews 12:22 states.