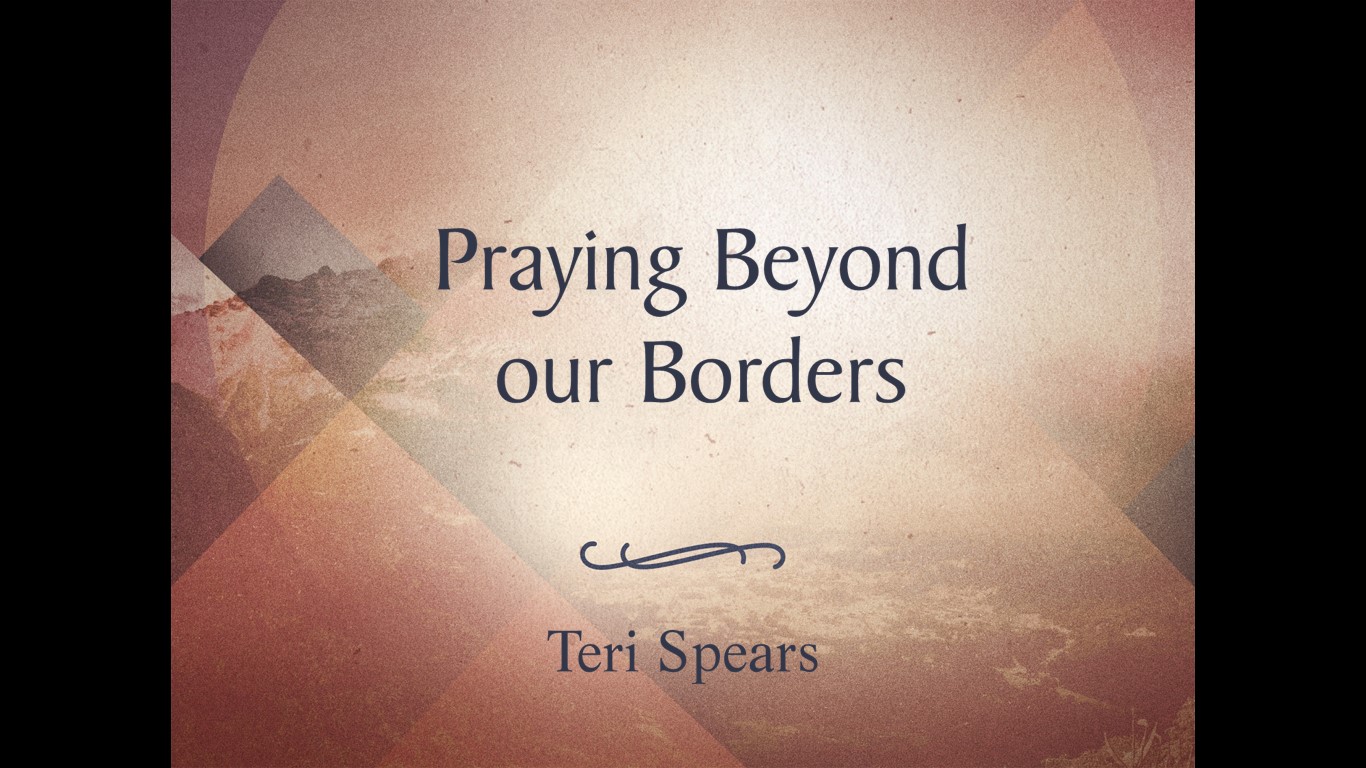 Our earth is just a small star in a great universe. Yet of it we can make, if we choose, a planet unvexed by war, untroubled by hunger or fear, undivided by senseless distinctions of race, color, or theory. By Stephen Vincent Benet

In Genesis, God created our world. From nothing, He made something. From a thought, He formed a realm. Obscurity gave way to clarity and a planet was born. A place He loved, a place He nurtured, and a place He gave His only Son for a sacrifice.

“For God so loved the world that He gave His only begotten Son, that whosoever believeth in Him should not perish but have everlasting life. For God sent not His Son into the world to condemn the world, but that the world through Him might be saved” (John 3:16-17). He loved and He gave. He gave so we could learn to love.

Our nation, nor our world, will ever be the same after September 11th. Indeed, we suffered a great loss on that day and a wound was inflicted on us collectively. An unsettled, unprotected feeling has come to rest across our nation. We feel vulnerable and violated.

These feelings are new to most Americans. Not many still live who survived Pearl Harbor. For this generation, war has never crossed over our borders. We have never experienced the emotional or physical damage this carries. We have been a protected people—a spoiled and pampered lot. A rich nation by comparison to the majority of the world.

The rest of the world has encountered far more of the ravages of war, starvation and fear of the future. We were a secure nation. Now, we know the fear of attack, the fear of what tomorrow’s news may broadcast.

Our compassion levels have risen. We can now feel for other nations that have been terrorized. With knowledge comes accountability—we must reach out in prayer and compassion to a wounded world. To whom much is given—much is required.

We can sit in condemnation on other nations and explain why we are better, but when discussions are over, nothing has been accomplished. Jesus said in John 12:47, “…for I came, not to judge the world but to save the world.” Compassion will cure more than condemnation! Compassion is not weakness, rather compassion and prayer is our duty.

Malachi 1:5 says: “0 Israel, lift your eyes to see what God is doing all around the world; then you will say, truly, the Lord’s great power goes far beyond our borders” (Living Translation). Give the world a gift of prayer. God gave His Son.

Can I, or my prayer group, really make a difference in such a vast sea of needs? Recall the story of Jesus and the five loaves and two fish. The disciples carried less than enough, to Him who was enough, and they had more than enough. We may feel like less than enough for the task, but He is enough; and He will answer. It has always been a minority on God’s side, but it becomes a majority when He steps in.

In May of 2002, after the September 11 attack, President George W. Bush made the following statement: “We’re in for a long war. It’s a tough struggle. This enemy is not going to just quit.”

The same can be said about the church. We have been in a long war and a struggle. Satan is not going to just quit. But prayer will prevail!

Set aside a season to pray “beyond our borders.” The 192 countries in this world have a total population of over six billion. The world needs Jesus. Matthew 13:38 says, “The field is the world….” John tells us in chapter 4, the fields “are white already to harvest.”

God has bound Himself to prayer. He has chosen to work through people. He needs our help to bring His plans into fruition. How many plans of God go unfulfilled because He is not able to find the human involvement He needs?

God makes decisions in heaven. But He needs people to enforce those decisions on earth through prayer. Ezekiel 22:30-31 illustrates this concept. God sought for a man to stand in the gap, so the land would not be destroyed. He found no one and the result brought devastation.

Because of prayer Peter was delivered from prison. Through praise and prayer an earthquake helped release Paul and Silas from their stocks and bonds. Prayer stopped the sun for Joshua and the rain for Elijah.

Does God need me to pray? He does not need us to pray to keep Him on His throne, but He needs us to pray so His will can be done on earth and so we can be involved in His plan. Matthew 16:19 gives us a powerful prayer promise: “And I will give unto thee the keys of the kingdom of heaven; and whatsoever thou shalt bind on earth shall be bound in heaven; and whatsoever thou shalt loose on earth shall be loosed in heaven.” What a promise! What a plan! And He wants us involved. Let us pray “beyond our borders” so His will can be accomplished.

If you are going to pray through the world in a year, you will need top ray for four countries a week. It is beneficial to do some research on each country to help focus on the particular needs of that nation.

The following is an explanation of how this program can be utilized in a church setting. You can make presentations, such as the following for four countries of the week. First, give a handout to the congregation with the names of these four countries. Then make the presentation, thus allowing people to take notes on the handout for prayer reminders.

On the following page is an example of one country. The information for the countries will need updating as you use them.

This, the world’s fourth largest island is off the Southeast coast of Africa in the Indian Ocean. The population is 16.4 million. Fifty-two percent of the population worship their ancestors. They have great respect for ancestors and devote much of their time and effort to caring for their graveyards. Many tombs look like painted houses. They perform cattle sacrifices and other ceremonies at family tombs. The remaining population is divided – 41% Christian and 7% Islam.

Political rivalries have existed for years. They are in an upheaval at the present. Two factions warring against each other. The airport and all ocean ports have been closed. Gasoline is $18 a gallon, diesel is $22 a gallon.

The churches are caught in this crisis. People can’t afford transportation. There is no money for the churches to operate. We must pray against this civil revolt. Pray for peace before mass starvation begins. Pray for the Christians and missionaries caught in this situation. Believe God for victory!

You can find this information on the Internet or from the many mission’s websites. Many books are available with information of the nations of the world. Follow God’s heart-pray for His world!
What if God answered our prayers the way we answer His call to prayer? What if He met our needs in the same way we give Him our time? Love beyond yourself- Pray beyond your borders!

The above article “Praying: Beyond our Borders” is written by Teri Spears. This article was excerpted from chapter four in Spears’s book Enlarging Your House of Prayer A Blueprint for Expansion.
The material is copyrighted and should not be repainted under any other name or author. However, this material may freely be used for personal study or purposes.

1 thought on “Praying Beyond Our Borders (Entire Article)”