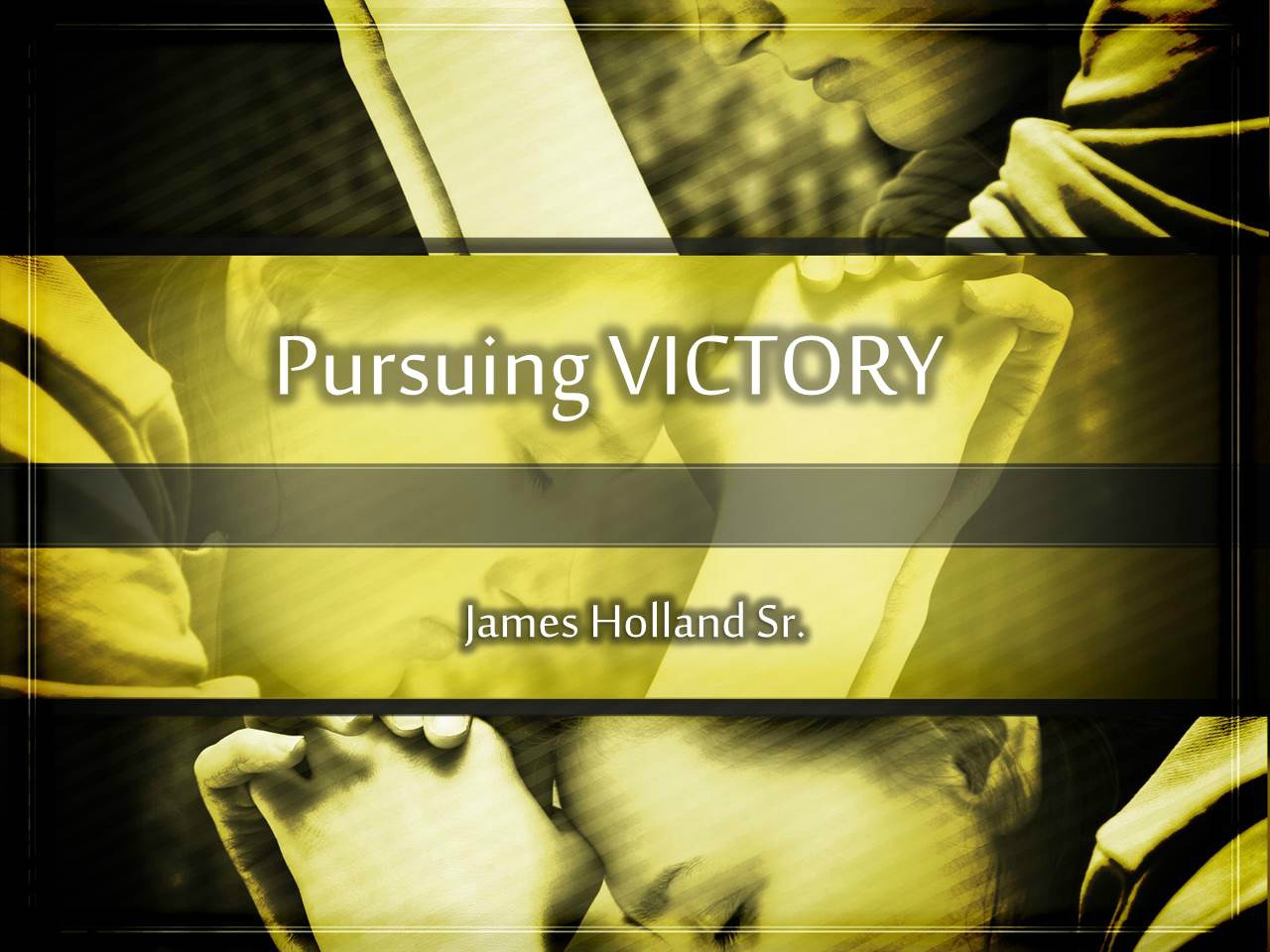 Now that we are beginning to understand that the victory God has called us to is a lifestyle rather than a lot of emotional ups and downs that have many well-meaning believers confused and totally ineffective for God’s kingdom, we can begin to pursue victory from a biblical perspective.

It would be reasonable for us to assume that since it is God who has called us and chosen us for victorious living, we would need to follow God’s handbook—the Bible. This is very important because God’s expectations have never changed. God has always required that people say “no” to their way of pleasing God and “yes” to His way of doing it. Now, herein lies the problem! Many people are used to living for God by their own guidelines.

If we are going to live in true victory, it will always be, first of all, by responding in obedience to God’s Word. The Bible is the handbook, our road map for victory. We read in II Peter 1:34 (NKJV) that God has given us “exceedingly great and precious promises.” These promises, when believed and practiced, enable us to overcome both the powers of darkness and natural forces that exist in this fallen world. The entrance of God’s Word in our lives brings light (Psalm 119:130). It purges the darkness from our inner being. In fact, if you are not walking in the light, you already have “be assured” that deception is on your horizon. However, if you are living in the light, you can be assured more light is coming your way. Abiding in the Word of God enables us to overcome the wicked one. In John 8:31-32, we read how abiding in the Word of God produces freedom in our lives.

What kind of freedom was Jesus referring to? In Romans 1:25-31, we see the spiritual and psychological bondage that disobeying God’s Word brings. Abiding in God’s Word produces spiritual, psychological, and emotional freedom. Victory is about being free!

Many Christians in the church today are living under the deceptive idea that what I believe can be disconnected from my behavior. They think if you say the right words and believe the right things, you will receive your get-out-of-hell-free card. In the meantime, they manage their sins. Jesus calls us not to sin management but to transformation, where we experience one breakthrough after another. We are called to follow Jesus and be transformed into His image (Philippians 2:5-8).

We are expected to take on the character of Jesus and thus influence people around us the same way He influenced others. Obeying God’s Word always connects what we believe and our behavior.

What does it mean to know the truth that shall make you free?

First of all, the truth Jesus referred to is who He is and what He has made available to all men! He is absolute truth, and He never changes. Yet we are a part of a civilization that has been greatly influenced by a mind-set that there is no absolute truth; that truth is merely what I want it to be. This kind of thinking has produced a generation where there are no absolutes. This has brought about untold distress to people individually as well as to our nation as a whole and the world in general! Our generation is like a great ship on a stormy sea with no rudder to guide the ship or a compass to find true direction.

In Paul’s day, to the Greek mind, knowledge had only to do with mental recognition. If someone had studied a subject and knew the facts, he was considered to know the truth of the subject.

The Hebrew idea of knowledge included practical application and experience. The simple study and mental storage of information were not knowing. The living practice of the things learned was required to know the truth of a subject. The biblical concept of knowing involves experience, not merely exposure to the truth. So when Jesus said you shall know the truth and the truth shall make you free, He was saying, “Acknowledge what I am telling you, understand what I am telling you, apply what I am giving to you by experiencing it and you will be made free!” God is not interested in a limited agreement with us; He wants total commitment. Obeying God’s Word gives us power to purify our lives. It also makes it possible for us to unlock supernatural provisions so that we can live fully while we are here on earth. We must know that God is intimately concerned with every aspect of our lives.

If we are to live a life of victory, there must be something over which we are victorious. So what is it?

First of all, we are to be victorious over our carnal nature. Paul gave us insight on this matter in Romans, chapters six through eight.

People move from their homes, looking for spiritual freedom (another word for victory), leaving friends and family behind. Many fight against addictive demons, drugs, alcohol, workaholicism, smoking, perfectionism, pornography, and a host of other things that can attach themselves to our flesh, just for the taste of true victory. We all want victory, even when we fear it. We were created to enjoy the victorious life. Yet, for many, this dream of spiritual freedom has been engulfed by a nightmare. Instead of being victorious, we have become slaves to our carnal cravings that just continue to draw us further from God.

Because traces of our original dream of victory linger deep within our souls, we still hunger for it. So we try to make it happen in our own way. But it will never happen apart from God at work in our lives.

Paul, in his letter to the Roman believers, realized these facts. So he led us into the very heart of what the Spirit of God will do to bring victory to us.

Paul was telling us that we are victorious over our old man—our pre-conversion life, what we were before becoming a true believer, under the unrestrained dominion of our flesh (sin nature). He continued that we are victorious over our body of sin. This does not refer only to our physical bodies and our yielding them to the ways of sin but includes our emotions, will, mind, as well as our body, everything about us that was dominated by sin’s power. Then he continued in verse six, “that henceforth we should not serve sin.” This implies that sin’s power over our lives has been broken. It has been made inoperative, defeated, deprived of the power to rule. We must note that even though the power of sin is broken in our lives once we are born again, this does not mean that sin’s power becomes extinct or that it is totally destroyed as far as its effects upon our world and unbelievers. Even as believers, we will feel the tug of temptation. But the good news is that we now know we do not have to give in to it.

How do we deal with it?

Glad you asked! Paul told us the steps for dealing with sin in Romans 6:11-23.

In verse 11 when he used the word reckon, it did not mean “I guess I’ll go to the store.” The Greek verb that is translated reckon means “to consider, to take into account.” It projects the idea of continually considering, constantly taking into account. So what should we keep on considering? That we are “dead indeed unto sin, but alive unto God.” That is, we are living in the victory that God has chosen us for.

In verses 12-14, Paul gave us the next step to dealing with sin’s power. This step includes two do’s and two don’ts. Here they are: Don’t allow sin to reign in your mortal body (verse 12). Don’t “yield . . . your members as instruments of unrighteousness unto sin” (verse 13). Do ‘yield yourselves unto God, as those that are alive from the dead, and your members as instruments of righteousness unto God’ (verse 13). Do this, and “sin shall not have dominion over you: for ye are not under the law, but under grace” (verse 14).

Praise God! While Paul made it clear that we live under grace, he certainly was not implying that we are lawless people. He was rather testifying to the fact that now not only God’s Word gives us instruction on how to live, but also by God’s Spirit living within us, we have the power to live as He would have us to. For those who would advocate that since we live under grace we can live any way we like, look at Paul’s response in verse 15, “What then? shall we sin because we are not under the law, but under grace? God forbid.”

His reply gives us our final step in our fight against sin’s power. It begins with the realization that we have a choice to make. What is this choice? The answer lies in verse 16, “Know ye not, that to whom ye yield yourselves servants to obey, his servants ye are to whom ye obey; whether of sin unto death, or of obedience unto righteousness?”

The detriments of serving sin and the benefits of serving God are clear. Can you think of any reasons why you might choose slavery to sin over freedom in Christ?

Consider the following seven principles that will help you to make the right choice:

Ownership (I Corinthians 6:19-20). “As the property of God, can I justify this activity? Is this decision benefiting to a victorious child of God?”

Influence (I Corinthians 8:9, 12, 13). “Could this choice negatively influence any of my friends or cause them to stumble?”

Testimony (Colossians 4:5). “How will my testimony be affected by this choice?”

Thanksgiving (Colossians 3:17). “Once I have made this choice, can I thank God for it with a clear conscience?”

Love (Romans 14:13-16). The final question to ask is “Am I willing to limit my liberties and my choices thereof in loving consideration of how it will affect my loved ones as well as the body of Christ?”

This article “Pursuing Victory” was taken from Chosen for Victory by James Holland Sr. and may be used for study & research purposes only.