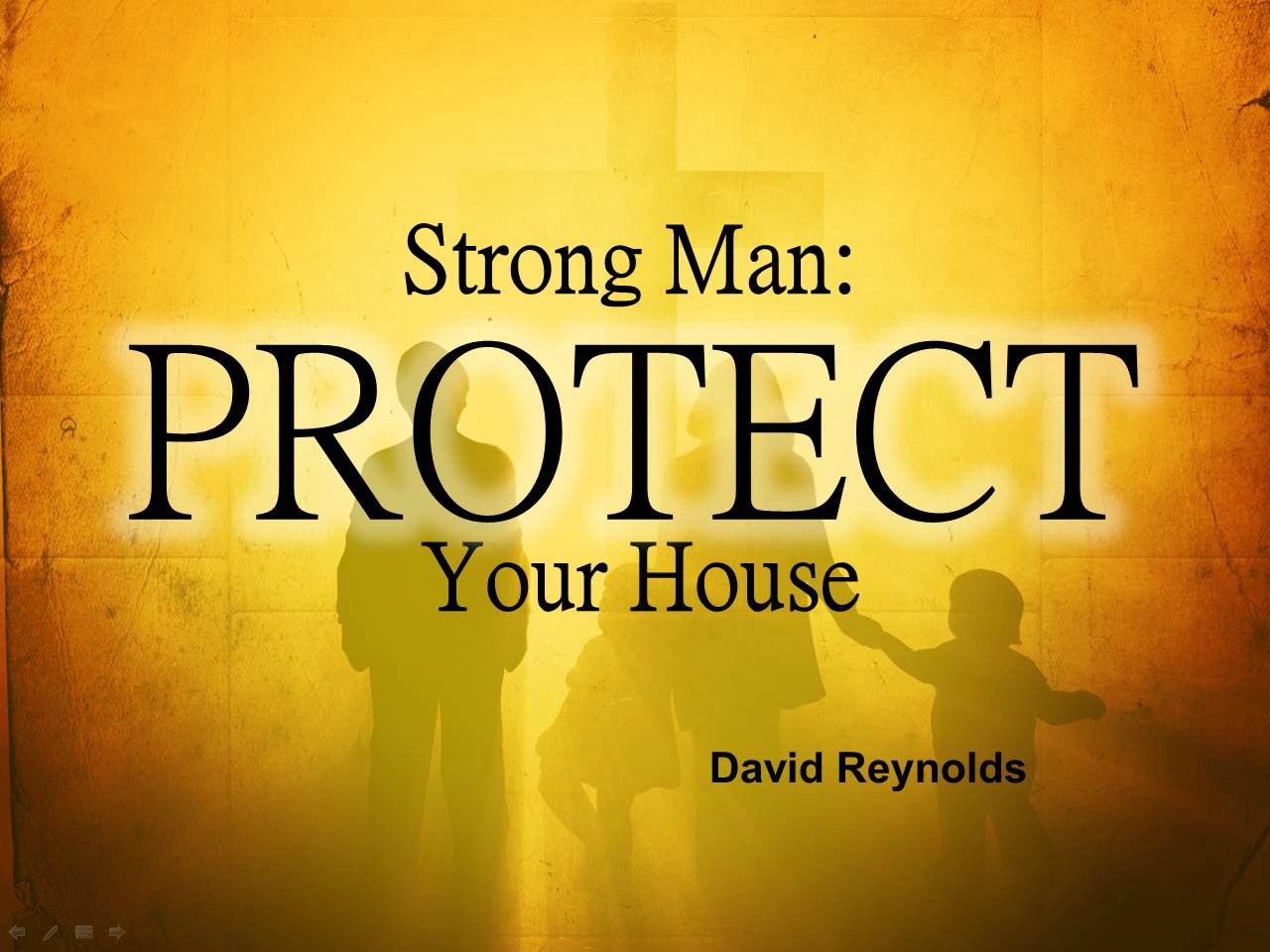 “No man can enter into a strong man’s house, and spoil his goods, except he will first bind the strong man…” (Mark 3:27).

“When a strong man armed keepeth his palace, his goods are in peace: But when a stronger than he shall come upon him, and overcome him, he taketh from him all of his armour, wherein he trusteth, and divideth his spoils” (Luke 11:21-22).

“If the goodman of the house had known what hour the thief would come, he would have watched, and not have suffered his house to be broken through” (Luke 12:39).

The main target of the family is the man!

We have an enemy out to destroy our homes. He knows that if he can destroy the strong man—he can destroy the home which is a stronghold for God. If the man is a good man and a strong man, Satan knows he must get to him first before he can get to the wife and the children. To get to the strong man he knows he must first take away his armor and his weapons. One advantage Satan has is timing. The good and strong man does not know the time of the attack. Satan knows that even a good man will relax at times. A little slumber and a little sleep comes to the best of good strong men; but when it happens the enemy is there to take advantage.

Another advantage the enemy of the home has is that he can choose the spot of attack.

I believe that even good men have weak spots and places which make them vulnerable. “Let us lay aside every weight, and the sin that does so easily beset us” (Hebrews 12:1).

It is usually the last thing that one puts on the altar and it is usually the first thing one takes up when he relaxes or is discouraged. You can be sure Satan will discover what this weak spot is.

Samson was the strongest man physically that ever lived, yet he had a flaw. He had a weakness for strange woman. His enemy, the Philistines, used this weakness in order to find and destroy his strength.

Strong and good man if you are not careful Satan will do the same to you. He desires to bind you with the thongs of materialism and the cares of this life. He would tie you with ropes of harmful habits. He wishes to cut your spiritual hair and leave you blind, ashamed and grinding the grain of the enemy. While you are thus in prison, your home and your country is left defenseless.

God is looking for strong men to lead their homes.

For twenty years God used Deborah because he could not find a man. When the men came to her and asked her to lead them into battle she warned them that they would be ridiculed because a woman would lead them, and get the glory. The men refused to lead. Israel settled down, became weak and quit fighting their enemies. They were more interested in keeping peace by granting concessions. This never works. They forgot God and His laws. “In those days, there was no king in Israel, but every man did that which was right in his own eyes” (Judges 17:6).

The men of Israel lost sight of their unique identity and accepted the customs, morals and gods of their neighbors. It was not long before Israel was overcome by these neighbors. The friendly neighbors were not friendly any more. The victors became the victims. Judges 5 and 6 gives us a description of their despair. In the days of Shamgar the roads were abandoned. Village life in Israel ceased. Not a shield or spear was seen among forty thousand in Israel and Israel lived in dens and caves. As soon as Israel sowed their grain the enemy came like grasshoppers and destroyed the crop.

If a strong Christian man is not careful the same thing can happen to his home. If a man tries to live beside his spiritual enemy and appease him, he will be overcome by him. A Christian man must ever remember he is in a real war. He must ever be alert and on guard in order to protect that which he values. Our enemy does not want our homes; he just wants to destroy our families. Our enemy would, if allowed, strip us of all protection and then leave us helpless and bleeding alongside life’s road. Our enemy would force us to be ashamed and defeated.

Are you willing to stand and fight? Notice: The first thing the enemy did to Israel was to take away their weapons and thus left them weak. Men keep your weapons. For the last fifty years America has kept war from her shores. How did she accomplish this? She sought peace from the position of strength. America made sure she kept her weapons and she was vigilant to the wiles of the enemy. Men you must do the same!

“Be strong in the Lord and in the power of his might. Put on the whole armour of God, that ye might be able to stand against the wiles of the devil. For we wrestle not against flesh and blood but against principalities, against powers, against the rulers of darkness of this world against spiritual wickedness in high places” (Ephesians 6:10-12).

This article “Strong Man: Protect Your House” was taken from “What Do You Have In Your House?” by David Reynolds and may be used only for research and study purposes only.