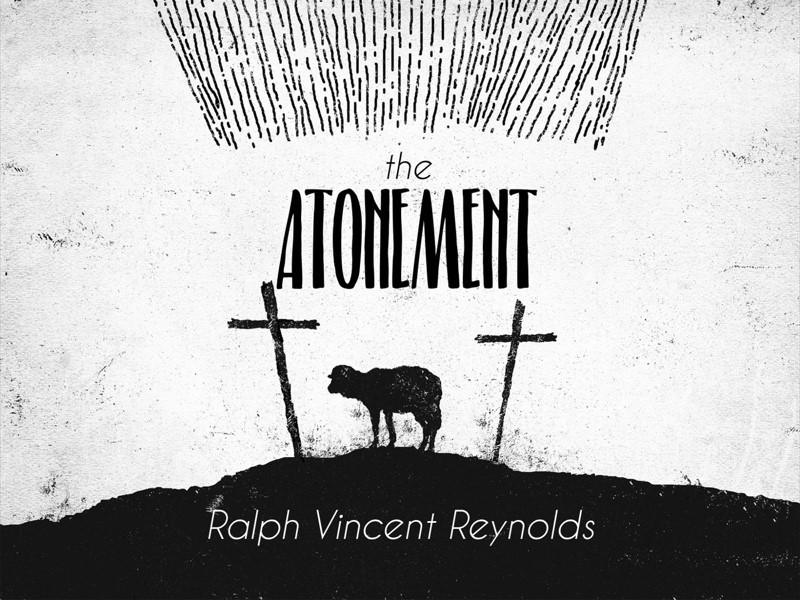 Hebrews 9: 22 “Without shedding of blood is no remission.”

The whole doctrine of salvation is built upon the atonement which is accomplished in the sacrificial death of Christ. If man could have been saved in any other way Christ would never have died the atoning death on Calvary. IN UNIT SEVEN we shall study what God did in providing salvation for fallen man. The account of what He did, the incarnation, the ministry of Christ on earth, the death, burial, and resurrection of Christ, is found in the four Gospels.

(a) ORDAINED IN HEAVEN:

1 Peter 1:19-20 “Blood of Christ…foreordained before the foundation of the world.”

In the plan and mind of God Calvary was from the very beginning.

(b) INSTITUTED ON EARTH:

Genesis 3:21 “Unto Adam also and to his wife did the Lord God make coats of skins and clothed them.”

When God clothed Adam and Eve blood was shed© This was the beginning of the crimson line of sacrifice that runs through the entire Bible.

(a) GOD’S HOLINESS AND MAN’S SINFULNESS:

Sin is violence done to the constitution,so as to speak,under which God and man live, just as unfaithfulness does violence to the covenant under which man and wife live. Sin is essentially an attack on God’s honor and holiness. It is rebellion against God; for in willfully sinning man chooses his own will rather than God’s, and for the time being becomes a law unto himself. But should God permit His honor to be attacked He would then cease to be God. His honor calls for the destruction of the one resisting Him; His righteousness demands satisfaction of the violated law; and His holiness reacts against sin, this reaction being described as WRATH. God’s wrath is governed by personal considerations; He is not hasty to destroy the work of His hands. He pleads with man; He waits to be gracious. He delays judgment in the hope that His goodness shall lead man to repentance. However man misunderstands the Divine, delays and scoffs at the thought of judgment.

The crucifixion revealed the awfulness of sin and pictured the dread penalty upon it. The Cross of Jesus declares that He never was, is not, and never can be, indifferent to man’s sin.

(b) SEPARATION FROM GOD:

Isaiah 59:2 “Your iniquities have separated between you and your God!’

The judgment of sin is death. Life is in the blood and when blood is spilled life is given. This explains the necessity of shed blood for the remission of sins.

The word “redeem” in both Old and New Testaments means:

(i) To buy back by the paying of a price.

(ii) To loose from bondage by the paying of a price.

(iii) To buy in a market and to take from a market.

Jesus is a Redeemer and His atoning work is described as redemption. A redeemer must have the following qualifications:

(ii) He must be willing to redeem or buy back.

(iii) He must have the price.

Jesus measured up to all three of these qualifications.

We are bought with a price. What was the price?

1 Peter 1:18-19 “… ye were not redeemed with corruptibkle things But with the precious blood of Christ… ”

Paul does not say that God was reconciled to man, but that God did something in order to reconcile man to Himself. This act of reconciliation is a finished work; it is a work that has been done in the interests of men so that in the sight of God the entire world is already reconciled. It remains for the evangelist to proclaim it and the individual to receive it. Christ’s death has made the reconciliation of all mankind possible; each individual must make it actual.

2 Corinthians 5:18-19 “And all things are of God, who hath reconciled us to himself by Jesus Christ, and bath given to us the ministry of reconciliation; To wit, that God was in Christ, reconciling the world unto himself… ”

The meaning of the word “Efficacious” is “producing or sure to produce a desired result”. What does the atonement produce?

(a) Pardon of transgressions:

(c) Deliverance from death – Death is the result of sin.

Hebrews 2:9 “that he by the grace of God should taste death for every man.”

John 11:26 “Whosoever liveth and believeth in me shall never die.”

Atonement includes the covering of both the sins and the sinner. To atone for sin is to cover sin from God’s sight so that it loses its power to provoke His wrath (Psalm 78:38; Psalm 79:9; Lev. 5:18).

When the blood was applied to the altar by the priest the Israelite was assured that the promise made to his forefathers would be realized for him. “And when I see the blood I will pass over you” Exodus 12:13.

What were the effects of the atonement or covering?

The sacrifices of the Old Testament were substitutionary in nature; they were reckoned as doing on the altar for the Israelite what he could not do for himself. In like manner Jesus did for us on the cross what we could not do for ourselves. Having taken human nature, He was able to identify Himself with mankind and so suffer their penalty. He died in our stead;

He took the penalty that was ours, in order that we might escape it. One who was sinless by nature and who had never committed a sin in His life, became a sinner (or took the sinner’s place).

Just as the ram caught in the thicket was a substitution of Isaac on Mount Moriah, even so was Christ a substitution for us. Just as Barabbas was set free by the death of Christ, even so may we be set free. Read and study carefully Isaiah, chapter fifty-three.

The word “propitiation” is believed to come from a Latin word “prope” meaning “near”. A sacrifice of propitiation brings man near to God, reconciles him to God by atoning for his transgression and winning Divine faviour and grace. To propitiate is to appease the righteous wrath of a holy God by the offering of an atoning sacrifice. Christ is described as such a propitiation (Romans 3:25; 1 John 2:2; 4:10). Sin keeps man at a distance from God; but Christ has so dealt with sin on man’s behalf that man may now “draw nigh” to God “in His name”.

The word “propitiation” in Romans 3:25 is the same word in the Greek used to translate the word “mercy seat”. In both Hebrew and Greek the word conveys the thought of an atoning sacrifice.

The consistent Bible view is that the sin of man incurred the wrath of God. That wrath is averted only by Christ’s atoning offering. From this standpoint his saving work is properly called propitiation.

All sin must be judged and it is here that the sins of all mankind have been judged. Christ paid the full penalty for the sins of every man. If our sins are not judged here, they will be judged at the White Throne Judgment (Rev. 20: 11-15).

The incarnation was for the purpose of the atonement. Jesus partook of flesh and blood in order that He might die. He was manifested to take away our sins (1 John 3:5; Hebrews 2:14). Christ came into the world to give His life a ransom for many (Matt. 20:28). The faith of the atonement presupposes the faith of the incarnation. The incarnation is certainly a declaration of the purpose on the part of Jesus to save the world, but how was-the world to be saved if not through the atonement? The atonement is the scarlet cord running through every page in the entire Bible. Cut the Bible anywhere and it bleeds. One out of every forty-four verses in the New Testament speaks of the atonement and the death of Christ is mentioned one hundred and seventy-five times. Moses and Elijah were interested in the death of Christ. (Luke 9:30-31). The Old Testament prophets searched deeply into this great subject (1 Peter 1:11). The theme of the song in heaven is that of Christ’s death (Rev. 5:8-12).

To some minds the death of Christ was just the death of a martyr. To others Christ’s death was an exhibition to a sinful world of God’s great love. To others He was an “Example” only. Still others see it in the light of the fact that God being holy, deemed it necessary to show to the world His hatred for sin, and so His wrath fell on the Christ of Calvary. Modern thought fails to see the necessity of Jesus dying,for Stephen died a martyr and Saul of Tarsus watched him die, but Paul did not preach forgiveness of sins through Stephen’s death (Acts 13:38). Light and erroneous views of the atonement come from light and erroneous views of sin. If we regard sin merely as an offence against man, a weakness of the human nature, or a mere disease, we shall not, of course, see the need of the atonement. We must see sin as the Bible depicts it, in its exceeding sinfulness, that which must be punished, and guilt which needs expiation, then and only then, will we understand the reason for the cross of Christ.

Just as the entire world was affected by the fall of man, even so does the death of Christ have an effect on the entire universe. (Romans 8:19-23) Jesus Christ is the center of an universe which revolves around Him and has now been reconciled by His death.

Colossians 1:20. “And having made pease by the blood of his cross, by Him to reconcile all things unto himself; by him I say; whether they be things in earth or in heaven.”

The propitiation reaches to the farthest bounds of the universe and as far as sin goes. In other words the remedy is as great as the need. Through the death of Christ, satan’s power has been neutralized (to be made of none effect). The lifting up of Christ on the cross meant casting down of satan. Man need no longer be a slave of sin. Calvary brings to the needy a remission of the past, present, and future sins. Now it is not so much a question of what shall I do with my sins? But rather what shall I do with Jesus which is called Christ? Colossians 2:14 “Blotting out the handwriting of ordinances that was against us, which was contrary to us, and took it out of the way nailing it to the cross.”

The above article, “The Atonement” was written by Ralph Vincent Reynolds. The article was excerpted from unit seven, lesson one and two in Reynolds’ book, Dividing the Word of Truth.

The material is copyrighted and should not be reprinted under any other name or author. However, this material may be freely used for personal study or research

1 thought on “The Atonement (Entire Article)”