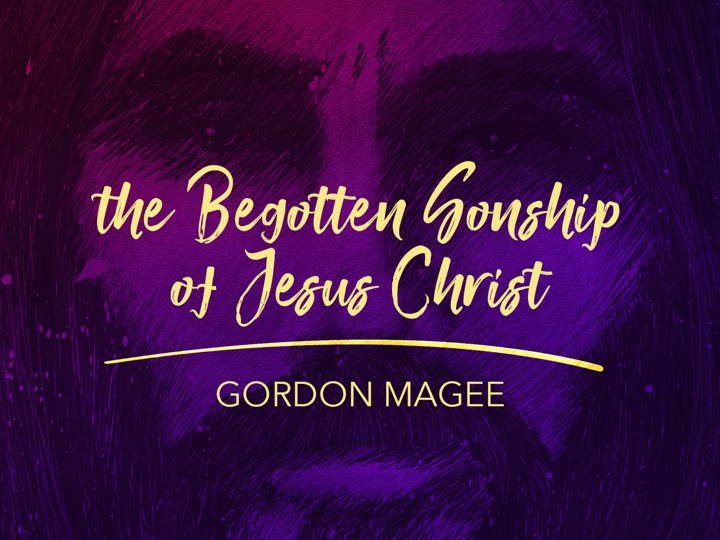 One of the greatest objections leveled against the truth of the one God is that implicit in our teaching is a denial of the eternal Sonship of the Lord Jesus Christ. Trinitarians say, “You do not believe, Brother Magee, that there are three persons in God?” I assure them that they understand me perfectly. I do not believe in what the hymn writer has written: “God in three Persons, blessed Trinity,” I substitute: “God in Christ Jesus, blessed Unity.”

Trinitarians say, “You cannot therefore believe in the eter­nal Father, the eternal Son, and the eternal Spirit?”

The two words eternal and begotten are in direct contradiction to each other. If someone is eternal he has never been begotten. If he has been begotten then he is not eternal. Two things cannot be true of Jesus as the Son. He cannot at the same time be the “eternal Son” and the “begotten Son.” Now which are we to believe? Let us believe what, the Bible says. It states that Jesus is the “begotten Son.” It never says that He is the “eternal Son.”

The Humanity of Jesus

The Sonship began at Bethlehem. The Incarnation was the time when the Sonship began. The angel, in Luke 1:35, said to the virgin mother-to-be, “That holy thing which shall be born of thee shall be called the Son of God.” Here it is clearly revealed that the humanity of the Lord. Jesus is the Son. “That holy thing”–that physical, fleshly one—is the Son. In Galatians 4:4 we find this truth stated in different words: “But when the ful­ness of the time was come, God sent forth his Son, made of a woman, made under the law.” Is not that clear? The Son was made of a woman.

Hebrews 1:5-6 pinpoints the very day in which Christ was begotten as to His Sonship: “For unto which of the angels said he at any time, Thou art my Son, this day have I begotten thee? . . . When he bringeth in the firstbegotten into the world, he saith, And let all the angels of God worship him.” In other words, Jesus was begotten and then brought into the world on the day that the angels of God worshiped Him in the sky over Judea. The shepherds were startled as they listened to the heavenly choir. The angels bade them not to be afraid, for there was that day born in the city of David a Savior, who is Christ the Lord. Hebrews 1:5-6 tells us that was the day in which Jesus was begotten and born as a Son.

A Denial of the Eternal Sonship

I was chatting one day with a staunch trinitarian. I could see that he was genuinely appalled that I should ever deny the eternal Sonship.

I said to him, “We will take our concordance and look up the verses speaking of Christ as Son. I think that will be all we will have to do, because you will find that in those verses there is always the thought of inferiority and subordination, human­ity and time.”

We turned to Luke 12:10: ‘And whosoever shall speak a word against the Son of man, it shall be forgiven him: but unto him that blasphemeth against the Holy Ghost it shall not be for­given.” Here Jesus said that if we blasphemed against the Son it would be forgiven us. But He further declared that if we blas­phemed against the Holy Ghost it will riot be forgiven. Now I do not propose to explain that verse—that is not in the scope of this booklet—but the very fact that people can blaspheme the Son and be pardoned and yet when they blaspheme the Spirit it is unpardonable–that very fact infers inferiority on the part of the Son.

Another verse of similar nature is Mark 13:32. Speaking of His own second coming, Jesus said, “Of that day and that hour knoweth no man, no, not the angels which are in heaven, nei­ther the Son, but the Father.” Jesus declared that as the Son He did not know the time of His own coming. But He said the Father knew what the Son did not. Without going into the verse to expound it, let us notice that there were certain things of which the Son was ignorant, again teaching subordination on the part of the Son.

In I John 4:14 we read, “The Father sent the Son” and in John 13:16, “Neither [is] he that is sent greater than he that sent him.” When we couple these two verses, again we are impressed with the thought that every time the Scripture men­tions the Son it shows Him in a subordinate and inferior light.

According to Hebrews 5:8, the Son learned obedience. The very fact the Son had to learn casts Him in an inferior role.

The Supreme Reason for this Denial

My trinitarian friend continued the conversation by saying, “Let us see where we are now. You believe that Sonship implies subordination. Of course, it always does; the very word son does. You also believe that Jesus became the Son or accepted a subordinate position or condition at Bethlehem?”

“That is very easily answered,” I assured him. “We find men­tion of the Son, for example, in Psalm 2:7-8: ‘Thou art my Son: this day have I begotten thee.’ Verse 12 says, ‘Kiss the Son, lest he be angry.’ You will notice that the holy psalm is a prophecy. It is a prophecy concerning the Messiah, placing Him in the golden age of prophecy when Jesus will be here ruling and reigning as the Son. We know the Old Testament speaks of the Son, but always prophetically, not as Christ being the Son at the time. Christ was not the Son in the Old Testament dispensation. He became the Son in the New Testament dispensation.”

I continued, “In Proverbs 30:4 we find another reference to the Son: ‘What is his name, and what is his son’s name, if thou canst tell?’ Now verse 1 tells us that this was a prophecy of Agur. He was speaking of things that were not as yet. Jesus was not the Son then, but Agur prophetically asked the question, looking over into another time and era when Jesus would have taken upon Himself Sonship. Although the Son is mentioned in Old Testament passages, they do not prove that Christ was the Son in the Old Testament. They are prophetical references to His coming Sonship.”

“There is only one plain reference in the Old Testament where God is called a Father relative to the Son. That is Isaiah 9:6: ‘For unto us a child is born, unto us a son is given: and the government shall be upon his shoulder: and his name shall be called Wonderful, Counseller, The mighty God, The ever­lasting Father, The Prince of Peace.’ This again is a prophecy. It is a prophecy of the birth of the Lord Jesus Christ. Here Isaiah says Jesus is the Father. Does not this deal a deathblow to the theory that the Son is a person eternally distinct from the Father?”

The Pre-existence of Jesus

Some argue that Christ was a Son before Bethlehem because “The Father sent the Son.” But John 1:6 says, “There was a man sent from God, whose name was John.” By the same reasoning we would be justified in saying that John was man before his birth, which is absurd! Others use the word gave, as in John 3:16, to prove that Christ was the Son before God gave Him to us. But Joseph spoke of the sons God had given him (Genesis 48:9). Were Joseph’s children sons before they were born? The truth is that Christ was sent as a man in maturity and not as a child in infancy (John 20:21; Isaiah 61:1; Matthew 21:37).

I heard of two men who were discussing this very matter. One man believed that Jesus had His entire origination at Beth­lehem. The other believed nothing of the sort. He believed that Jesus was pre-existent from all eternity. They met together in a verbal clash. The man who denied the pre-existence of Jesus prior to Bethlehem held strongly to his point. They had almost exhausted themselves when it seemed that the believer in the pre-existence of Jesus received a little flash of inspiration. He said to the disbeliever, “Have you ever read II Corinthians 8:9?”

“Let me quote it to you,” said the believer. “For ye know the grace of our Lord Jesus Christ, that, though he was rich, yet for your sakes he became poor, that ye through his poverty might be rich.’

“Well,” the believer continued, “I want you to answer me something. If Jesus did not pre-exist in splendor and great glory long before Bethlehem, would you kindly tell me at what time He was rich? He was not rich at His birth; He was born in a manger. He was not rich in His life; He Himself said, ‘Foxes have holes, and birds of the air have nests; but the Son of man hath not where to lay his head’ (Luke 9:58). He was not rich in His death; they could only give Him a borrowed tomb. He was not rich at any time during His thirty-three and one-half years of earthly ministry. Now, tell me, if you do not believe in His pre-existence, at what time was Jesus Christ rich?”

This opponent had met the truth and could not reply.

We must conclude that Jesus must have been rich before His earthly sojourn, for He was not rich here.

We certainly believe in the pre-existence of the Lord Jesus Christ. There never was a time when He did not exist. We be­lieve that He is the bread that came down out of heaven. We believe that, although as to His humanity He was not fifty years of age, yet He was older than Abraham. We believe that He came forth from Bethlehem, but that He had many goings forth from of old, from the days of eternity. There is no mistake about it; we stand foursquare on the truth of the eternality of the Lord Jesus Christ!

When the millennium is completed, the Sonship ministry will be finished. When He has accomplished redemption, which He has; when He has accomplished mediation, which He is now in the process of doing; when He returns as man and rules as the Son for a thousand years; and when the thousand years are expired, the Sonship ministry of Jesus Christ will have been cli­maxed, completed, and fulfilled. Very reverently I say that it will have become obsolete (I Corinthians 15:24-28).

The above article, “The Begotton Sonship of Jesus Christ” was written by Gordon Magee. The article was excerpted from chapter 3 in Magee’s book, Is Jesus in the Godhead or Is the Godhead in Jesus?

1 thought on “The Begotten Sonship of Jesus Christ (Entire Article)”