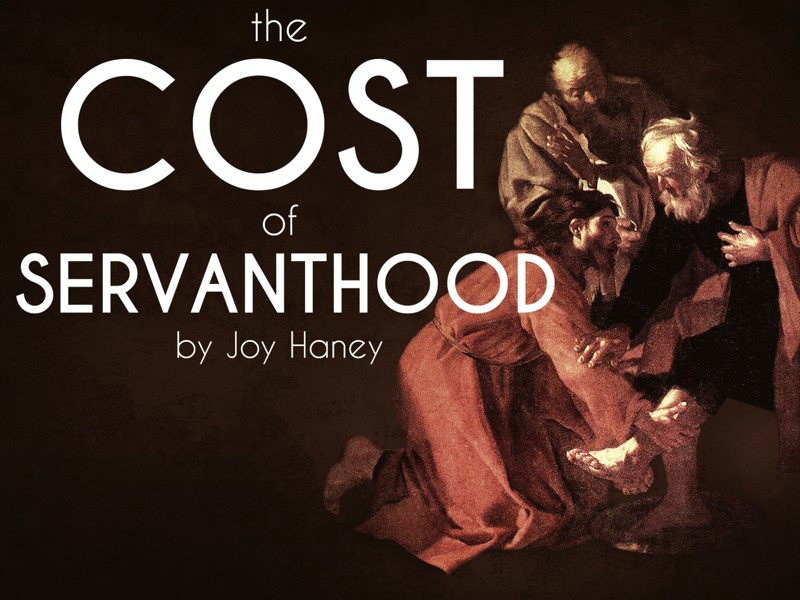 Nicodemus had prestige, Paul had power, Zacchaeus had social status, Lydia had hospitality, but what did Mary have? She did not have much to offer, but she did have some costly ointment. Everyone gave of his substance in his own way, but they did not think of anointing Jesus—except for Mary.

She loved Him so much that she gave her most precious possession. She did not give in a cold, haughty manner but took on the form of a servant—washing His feet with costly ointment and then drying them with her hair. (See John 12.)

The greatest servant gives his best to the one he serves. He holds nothing back but works tirelessly to please. And the one who loves most, serves most.

The relationship between God and His people is a loving one. When a scribe asked Jesus what the greatest commandment was, Jesus simply answered that the first commandment was to love God with all the heart, soul, mind, and strength (Mark 12:28-30). He who loved so much that He gave expects us to love with the same feel­ing. He does not ask of us any more than He asked of Himself.

When people were depositing money into the Tem­ple treasury, Jesus told his disciples to notice a truth: “Many that were rich cast in much,” but when the little widow put her two mites in, Jesus said, “This poor widow hath cast more in, than all . . . for all they did cast in of their abundance; but she of her want did cast in all that she had, even all her living” (Mark 12:41-44).

Her giving cost her something. Love cannot always be measured in the abundance of a gift, but in what it costs the giver. Mary gave her alabaster. Jesus gave His life. The widow gave all she had. Often the value of a gift is determined by the degree of sacrifice.

When David bought a threshing floor from Araunah to use as a place of worship, Araunah first offered to give it to him, but he refused it. “And the king said unto Araunah, Nay; but I will surely buy it of thee at a price: neither will I offer burnt offerings unto the LORD my God of that which doth cost me nothing” (II Samuel 24:24). David did not want to use something that did not cost him anything, for he knew God wanted a sacrifice.

We “are bought with a price” (I Corinthians 7:23). A cost was involved to redeem us, just as there is cost involved in our service. “The Son of man came not to be ministered unto, but to minister, and to give his life a ran­som for many” (Mark 10:45).

Everyone has some ointment. Let us not hoard it, but pour it on the Lord’s feet as Mary did. We can serve the Lord today by serving His body, the church.

Serving is not looking out for number one. It is not seeking easy roads or shunning responsibility to the hungry and needy. Doing the will of the Father is a great thing, but it can be a lonely experience at times. It can make a person harassed, distressed, and exhausted.

When we feel this way, we must withdraw and restore ourselves just as Jesus did. “And he withdrew himself into the wilderness, and prayed” (Luke 5:16). This inci­dent took place right after He performed great miracles and ministered to multitudes.

Jesus does not want us to have permanent burnout, disillusionment, or bitterness. He wants us to give our all, but He also wants us to take time to withdraw when we feel resentment or too much pressure.

On another occasion Jesus hid Himself so no one could find Him, but they eventually did (Mark 7:24). At least He had a little respite from His responsibilities. He was not only God but also man, so He felt the same pressure we feel when we are stretched too thin.

Jesus said, “If any man come to me, and hate not his father, and mother, and wife, and children, and brethren, and sisters, yea, and his own life also, he cannot be my disciple. And whosoever doth not bear his cross, and come after me, cannot be my disciple” (Luke 14:26-27). He did not mean for us to despise our relatives or do harm to them. He did not mean for us to stand in front of a car and be killed. He simply meant that He is to be first in our lives. He has to reign supreme. He will not play se­cond fiddle to anyone or anything.

He wants our love, dreams, will, ambitions, and motives to be nailed to the cross. We do not have to die physically on a cross—He did that for us—but we do have to pay the cost of discipleship. To be a disciple means that our allegiance is to the Master. We operate under His orders and His requirements.

One night in 1988, the Lord gave me a vivid dream. It was so powerful that I awoke trembling at His presence. I jumped out of bed, got my Bible, and went to my little study room. Immediately the Lord brought Genesis 24 to my mind. I turned to it and upon reading it fell on the floor sobbing as the Lord spoke to me.

In my dream I saw a large throne lifted up high with the Lord sitting on it. On either side were hundreds and hundreds of angels forming a line, and everything was bathed in golden light. The aisle between the two lines of angels was empty except for me. I was approaching the throne, and the angels were chanting, “An oath, an oath, you’ve got to take an oath.” They kept repeating this until I awakened.

As I read the account of Abraham calling his servant to bring back a bride for his son, Isaac, I sobbed, “Lord Jesus, take an oath. I am your servant. I will go to
help bring a bride to you.”

Now when I leave my family for three days to minister to ladies across America, with tears filling my eyes and a homesickness enveloping me at times, I remind myself of my servant’s oath.

Pledges to the Lord do not come without weariness, pain, perils of death, loneliness, frustrations, and sometimes being misunderstood. They will lead us into unfamiliar, uncomfortable, and difficult places, but as Abraham promised his servant, “He shall send his angel before thee” (Genesis 24:7), so the Lord promises angels to minister to His children (Hebrews 1:14).

When we measure all the discomforts up to the sacrifice of the Cross, they pale into nothingness. When measured up against Paul, our fellow laborer, somehow the difficulties do not seem quite so bad.

The servant spirit must get hold of the modern-day church. The Old Testament made provision for a servant who was set free but who said, “I love my master, my wife, and my children; I will not go out free” (Exodus 21:5). At the end of six years of service, he was entitled to be released, but if he chose, he could remain a servant. In front of a judge, his master would pierce his ear with an awl to signify that he would still be a servant. This was the highest honor a servant could bestow on his master. He was no longer just a hired servant, but now he was a love servant.

The service of love is not burdensome, but it is secure and lasting. Cost means nothing, because there is love. “Then took Mary a pound of ointment of spikenard, very costly, and anointed the feet of Jesus, and wiped his feet with her hair” (John 12:3). She did not even consider cost; she only knew that she loved. This is the level of service the Master desires of His children.

We must be seized by the urgency of the hour. We must plan our strategy—plan our work and work our plan. Let us forget the cost! Let us give because we love Him and care about His purpose. Let us get on fire with it and become addicted to carrying out His desires.

Let God work through you. Give your best wherever He places you and in whatever you are doing. Be His ser­vant everywhere, not just in the church building. Every­where you go, be His light. Make a consecration like the young girl in the following poem did:

“Free to do, free to speak, free to go, and free to claim

All that is mine. I’ll heap it unto me.

I will become rich in things and liberty.”

But as she looked back at the Cross that had freed her, Her eyes filled with tears and her world began to blur; For she saw Jesus, the One who had willingly suffered, And as she stood gazing, it seemed that she heard . . .

Floating down through the ages, the old familiar strain:

“Take up thy cross, follow Me, and then you will really gain.”

All that had seemed important began to slip away

As she made her decision that very day.

Everything she had, she laid it down before Him,

And said, “You’re my Master. With love fill me to the brim.

Into the marketplace, on the job, gladly I will bear Your mark

So all the world can see Your love; a light I’ll be in the dark.

“I’m a servant, not forced to do so, but I give my life to You. You’ll be my guiding star in the midst of whatever I do. I’ll take on Your name, Your customs, and Your ways; And through me, You will shine like a glorious sun ray!”  -Joy Haney

Paul said in Romans, “I beseech you therefore, brethren, by the mercies of God, that ye present your bodies a living sacrifice, holy, acceptable unto God, which is your reasonable service” (Romans 12:1). He called our sacrifice a reasonable service.

Jesus said much the same in Luke 17. He asked the people what they would do if they had a servant plowing in the field and it came time to eat. Would the master tell the servant to go and eat? No, he would tell the ser­vant to serve him first, and then he could eat. Would he thank him for serving him? No, because he did the things that were commanded him. Jesus concluded, “So likewise ye, when ye shall have done all those things which are commanded you, say, We are unprofitable servants: we have done that which was our duty to do” (Luke 17:10).

We do not think much of duty when we are love slaves to Jesus Christ; we feel privileged to work in His service. To be owned by Him, commanded by Him, to be in His presence and associated with Him is the highest honor.

David Livingstone explained it well: “People talk of the sacrifice I have made in spending so much of my life in Africa. Can that be called a sacrifice which is simply paid back as a small part of the great debt owing to our God, which we can never repay? Is that a sacrifice which brings its own reward of healthful activity, the con­sciousness of doing good, peace of mind, and a bright hope of a glorious destiny hereafter? Away with such a word, such a view, and such a thought! It is emphatically no sacrifice. Say rather it is a privilege.”

The above article, “The Cost of Servanthood” was written by Joy Haney. The article was excerpted from chapter 11 in Haney’s book, May I Wash Your Feet?

1 thought on “The Cost of Servanthood (Entire Article)”