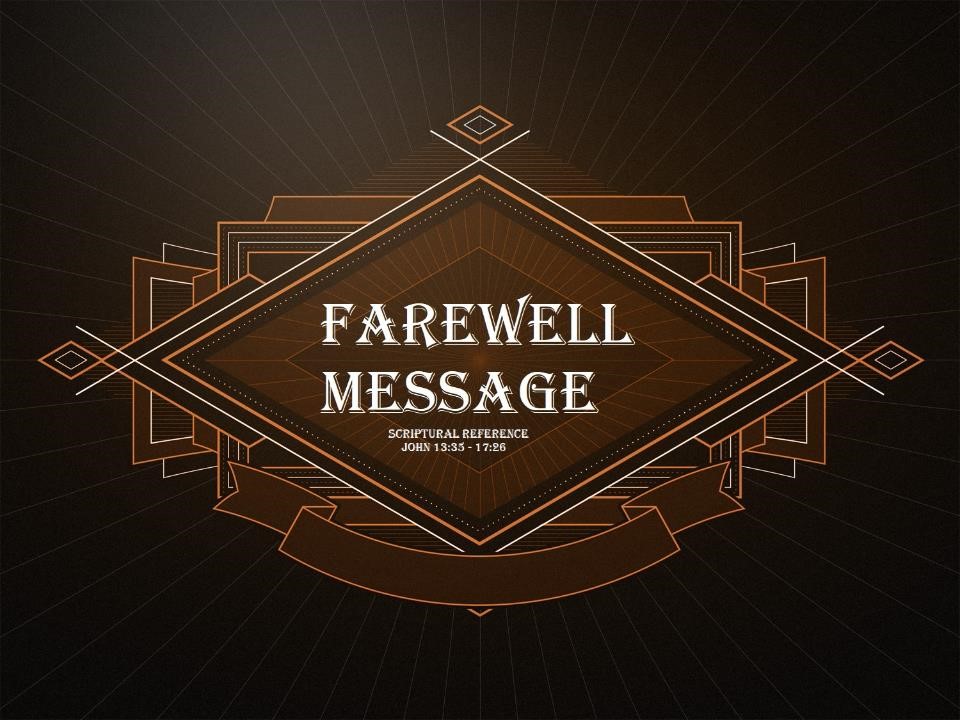 Scriptural Reference: John 13:35 – 17:26.
The Farewell Message:
• “Little children, yet a little while I am with you… Whither I go, ye cannot come…” (John 13:33).
• The Lord’s announcement to the disciples of His departure to a place where they could not at present follow Him made their hearts sink.
• In order to encourage them He gave them His farewell message, which was concluded, with His prayer.
• This farewell message was spoken immediately after Judas had left the room.
• He opened His heart to the little band and gave them some intimate and precious truths that they were unable to fully understand until they received the Holy Ghost.
• We should note that He addressed them as “Little children.”
• This farewell message contains some of the most well known and beloved passages of Scripture in the entire Bible.

The New Commandment:
• The new commandment, and also His last before His death and resurrection, “That was, ye love one another.”
• Love for one another, in contrast to the hatred and selfishness of the world is the true test and condition for discipleship.
• The Law of Moses had given them the precept; “Thou shalt love thy neighbor as thyself.”
• However, in the Old Testament they were wholly unable to keep this law.
• Now in the New Testament when they would receive the Holy Spirit they would be able to prove their discipleship by loving one another.

Let Not Your Heart Be Troubled:
• The hearts of the disciples were made sorrowful by the word that Jesus would soon leave them.
• Here Jesus pours out His heart in consolation and reassurance.
• “Ye believe in God, believe also in me.”
• Jesus pleads that they might have the same faith in Him as in God, thus putting Himself upon equality with Deity.
• He assured them that He was going ahead to prepare lodging places for them.
• He gave them a promise of personally returning and receiving them into that eternal home.
• To the question of Thomas concerning the way, our Lord replied, “I am the way, the truth and the life.”
• Jesus is both the way of God and the way to God; He is the personification and the incarnation of truth; He is also life in its true essence.

Show Us The Father:
• Philip requested that Jesus would show them the Father and they would be satisfied.
• Philip had wholly failed to comprehend that for three years he had been walking with God.
• He had not understood that he could not know more of God than that revealed by Jesus Christ.
• Jesus seemed surprised that Philip had not understood.
• “Have I been so long with you, and yet hast thou not known me, Philip? He that hath seen me hath seen the Father.”
• Appealing to His words and to His works as only possible by the Father, He proceeded to tell them of the coming of the Comforter.
• This passage of Scripture proves that Jesus Christ and the Father are one.

Another Comforter:
• “And I will pray the Father, and he shall give you another Comforter, that he may abide with you forever” (John 14:16).
• Jesus assured His disciples that He would not leave them comfortless.
• He promised to send them “another” Comforter.
• The adjective “another” was given many people difficulty and given them apparent grounds for arguing for the Trinity Tradition.
• However, the word “another” does not mean another person but rather a new ministry.
• Jesus identifies the Comforter with Himself.
• He said that He dwelt with them and should be in them.
• The clear positive statement, “I will come unto you “places the whole question beyond any doubt.
• Actually what Jesus said meant, “I will not leave you fatherless or orphans, I will come to you.”

2. They Could Expect Persecution:
• Jesus told His disciples not to be surprised if the world should hate and persecute them.
• The world rejected Christ and they also could expect to be rejected.

3. The Disciples Would Do Greater Works:
• In John 14:12 Jesus promised His disciples that they would do greater works – the same kind of works in quality but greater in quantity.
• In John 14:13 and John 16:23 Jesus promised that whatsoever they would ask in Jesus Name it would be granted.
• This, of course, means more than just repeating the Name of Jesus.
• To pray in His Name, one must be identified with Him in consecration and devotion to God’s Kingdom.
• His name stands for obedience, humility and compassion for lost humanity.
• To pray in His name the Spirit of Christ must wholly direct in the purpose and utterance of the prayer.

The Lord’s Prayer: (John Chapter 17)
• This may truly be called the Lord’s Prayer for this certainly was His own prayer.
• He uttered this prayer in the presence of His disciples.
• The prayer may be divided into four petitions:

1. Jesus prayed for Himself:
• He prayed that He might be glorified.
• This was actually a prayer that the divine plan and purpose of God that had been planned from the beginning might be fulfilled in Him.

2. Jesus prayed for His disciples:
• He prayed that the disciples might be kept and sanctified.