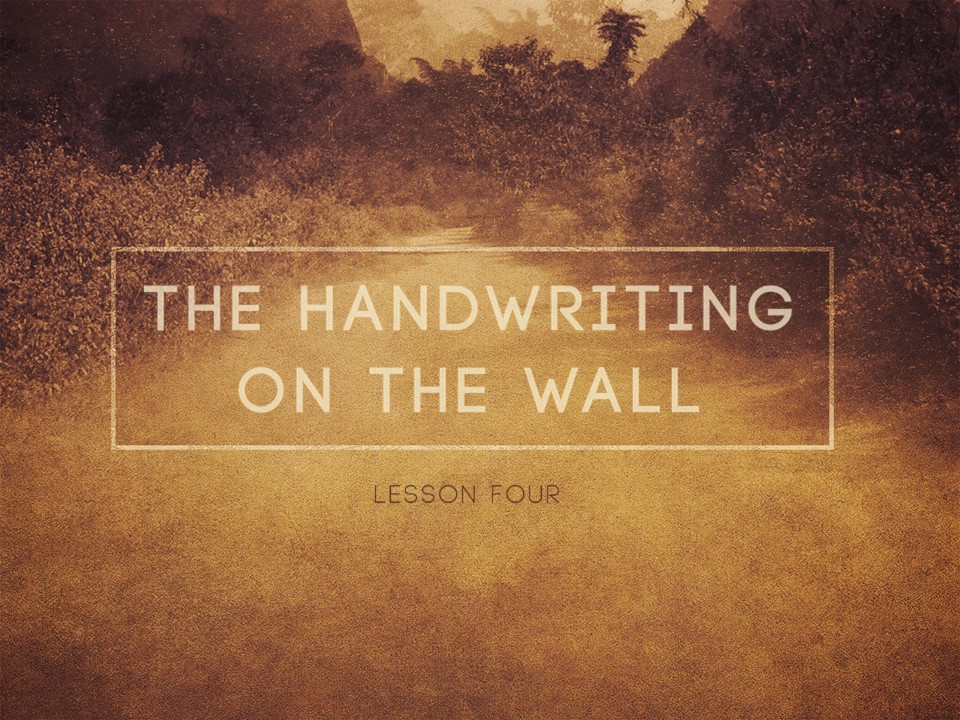 THE HANDWRITING ON THE WALL

Bible critics have claimed for years that Belshazzar was not the king of Babylon when it was
overthrown. Historians have given the name of Nabonnaid as being the last king of Babylon.
However, God has His own way to verify the accuracy of the Bible.

In 1853 an inscription was found in a cornerstone of a temple built by Nabonnaid. In this
inscription he mentioned Belshazzar as being his first born and favorite son.

In the interpretation of the handwriting, Daniel called Belshazzar the son of Nebuchadnezzar
(Daniel 5:22). This offers no problem for in the language of that day there was no word for
“grandfather” or “grandson.” It is quite evident that he was the grandson of Nebuchadnezzar.

The king of Babylon, Nabonnaid, was his father, and Belshazzar was the vice-regent of the
empire. It was for this reason that Belshazzar promised to make Daniel the third ruler in the
kingdom (Daniel 5:16).

Apparently, at this time Nabonnaid was away on some military expedition and had left
Belshazzar in charge of Babylon.

B. THE HANDWRITING ON THE WALL:

This is the second time that it is recorded in the Bible that God Himself wrote. The first time
was upon Mount Sinai when God wrote the law on tables of stone. Here upon the wall of
Babylon God wrote a message of judgment. In the New Testament Jesus Christ stooped and
wrote a message of grace upon the dust of the floor of the temple.

Belshazzar had called for a great feast. He invited a thousand lords and princes with their wives
and concubines. In the midst of the drunken revelry there was much licentiousness and gross
sin. However, this was not sufficient for Belshazzar. He thought of a new way to entertain his
guest and show his defiance for God. He called for the sacred vessels that had been brought
from Jerusalem and used them in drinking to pagan gods.

Suddenly the fingers of a man’s hand appeared and wrote on the wall by the candlestick where it
could be seen by all. All laughter and gaiety soon turned to soberness and fear. They trembled
at the supernatural sight and Belshazzar called for the wise men to tell the meaning of the
writing. The words were: “MENE MENE TEKEL UPHARSIN.

These words were apparently Aramaic and could be read by everyone. However, no one knew
the meaning. When the wise men could not interpret the message, the Queen Mother came into
the Banquet Hall and told Belshazzar to call for Daniel.

Daniel was not about eighty-eight years of age. It had been some sixty-five years since he had
interpreted the meaning of Nebuchadnezzar’s dream. Very likely it was in the middle of the
night and Daniel was awakened from his slumber. He was hurried to the scene of fearful
confusion.

Here was the handwriting with the meaning:
MENE – Numbered – God hath numbered thy kingdom and finished it.
TEKEL – Weighed – Thou art weighed in the balances and found wanting.
PERES – Divisions – Thy kingdom is divided and given to the Medes and Persians.

Even while Daniel was giving the message of judgment and doom to Belshazzar the enemy was
entering the city.

C. BELSHAZZAR’S SIN:
Belshazzar was guilty of more than one sin. There were several ways in which Belshazzar was
bringing God’s judgment.

1. He was drinking and reveling while the enemy was at the gates of the city. His character is
revealed in the drunken debauchery in which he was taking the lead.
2. He was arrogant and presumptuous. He was aware, of course, of the enemy army
besieging the city. He had a false sense of security, and showed a boastful arrogance in
having a drunken feast.
3. He refused to humble himself even though he knew the way God had dealt with
Nebuchadnezzar. Undoubtedly the sin of pride was the root of all other sins in his life.
4. The most serious sin was that of blasphemy. He blasphemed God by desecrating the
sacred vessels, which had been consecrated to the Lord. Swift judgment came when he
used these vessels in idolatrous worship.

D. THE FALL OF BABYLON:

Babylon was and had been founded by Nimrod the great-grandson of Noah. Over the years it
had been fortified until by the time of Belshazzar it was thought to be invincible.

It was built astride the Euphrates River, which divided it into two almost equal parts. There were
double walls surrounding the city. These walls were wide enough that four chariots could drive
abreast on the walls. The walls extended thirty-five feet below the ground and were surrounded
by wide and deep moats. The city was fifteen miles square enclosing an area over two hundred
square miles.

It was in this fortification that Belshazzar trusted. He felt so secure that he could have a
drunken feast with the enemy at the gates.

Darius conquered Babylon while Cyrus was busy fighting wars elsewhere. Darius reigned as
king of Babylon for about two years until the personal arrival of Cyrus.

Darius gained entrance to the city by diverting the water of the Euphrates into the moats that
surrounded the city. The army of the Medes and Persians then walked into the city on the
riverbed from both directions. Because of the feast many of the interior gates were open and
Babylon fell into the hands of the enemy with little resistance.

There are several lessons from which we may profit:
1. The first lesson is to know the seriousness of desecrating the sacred vessels consecrated to
the Lord.
a. The ministry: God will quickly bring judgment upon those who harm the ministers of
the gospel. “… Touch not mine anointed, and do my prophets no harm” (Psalm
105:15).
b. The bodies of the saints who are Spirit-filled: “If any man defile the temple of God,
him shall God destroy; for the temple of God is holy, which temple ye are” (I
Corinthians 3:17). “What? know ye not that your body is the temple of the Holy
Ghost …?” (I Corinthians 6:19).
c. Our church building: Buildings and articles, which have been dedicated to the use of
the Lord, should never be used in a disrespectful manner nor put to a profane use.

2. The second lesson to learn is the deception of Satan—the false security that sin brings.
Many times people in grave danger resent being awakened to their danger. Sometimes
faithful ministers are hated because they warn of the dangers of sin. The doctrine of
Unconditional Eternal Security is a very dangerous teaching because it allows people to
become careless and trust in a false security.

3. The third lesson is to learn from Belshazzar and be quick to remember the mistakes of
others and be willing to humble ourselves.

4. Let us remember that we are all being weighed in the balances. Let us not be found
wanting.

5. We should note the similarity between the sinful, licentiousness of the drunken revelry
pictured here and the darkness of the world today. People desire to go from one extreme to
another to defy God and revel against everything that is decent and right.

6. On the positive side there is a bright lesson to be learned from Daniel’s life. In this chapter
he is spoken of as one who could dissolve doubts (Daniel 5:12 and Daniel 5:16). Doubts
may be dissolved by the proclamation of the Truth of God’s Word. Let each of us plan to
be a “DISSOLVER OF DOUBTS.”

Belshazzar represents the kings and nations that have and will put forth their hands against
Israel. They will have no fear of God and no respect to that which belongs to the Lord. They
will entertain a false sense of security and boast. They will be destroyed even as Belshazzar
was destroyed.

A. Give a brief description of Belshazzar’s feast:

B. What was the meaning of “mene mene tekel upharsin?”

C. What was four aspects of Belshazzar’s sin?