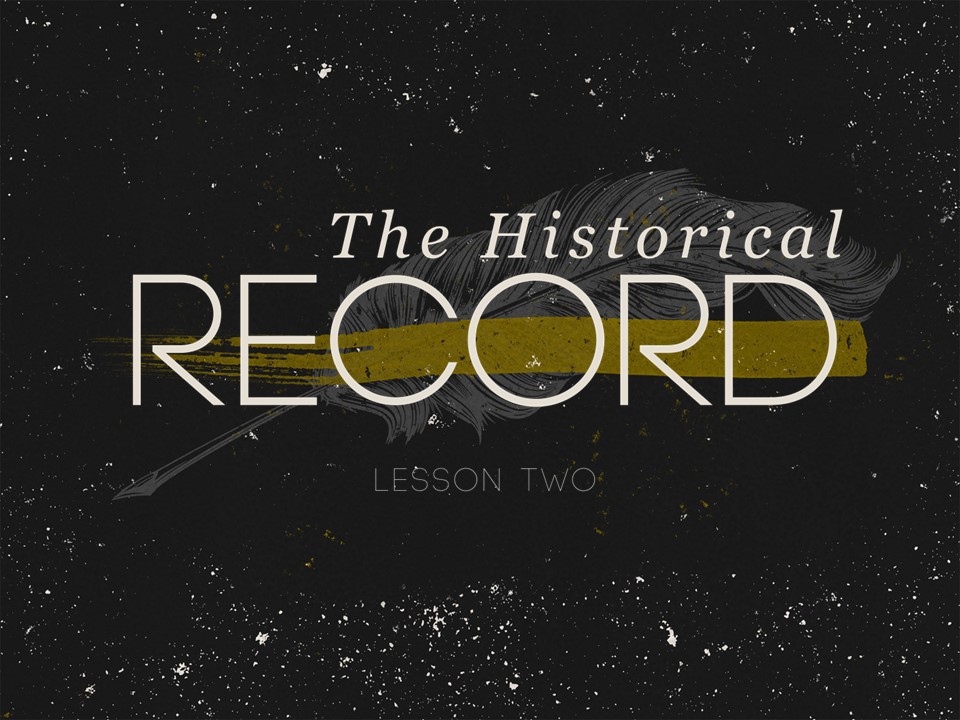 A. THE HISTORY OF THE CHURCH IS STILL NOT COMPLETED:

Although this unit of study is mainly concerned with the history of the twentieth century Pentecostal Revival, we must remember that it had its beginning in the Upper Room on the Day of Pentecost. The book of Acts is the one historical book of the New Testament, which gives us the record of the early church. This book of Acts only contains twenty- eight chapters and simply gives the introduction to the history of the Pentecostal movement.

Students might be inclined to believe that between the closing of the Bible record and the beginning of the twentieth century God did not baptize anyone with the Holy Ghost and that there was no one who enjoyed the Pentecostal experience with the initial evidence of speaking in tongues. However, this is certainly not the case. Throughout church history God has had His Spirit-filled people and a true church which experienced Hebrew 2:4, “God also bearing them witness, both with signs and wonders, and with divers miracles and gifts of the Holy Ghost, according to His will?”

It is true that the outpouring of the Holy Ghost during the first century may be called the EARLY RAIN and the outpouring of the Holy Ghost during this twentieth century may be called the LATTER RAIN. “Behold, the husbandman waiteth for the precious fruit of the earth, and hath long patience for it, until he receive the early and latter rain” (James 5:7). Although the showers of blessing were outpoured in the first and last century of church history, yet throughout all the other centuries there have fallen upon hungry hearts the mercy drops.

In this lesson we are studying a few examples from history to show that there was a small stream of Pentecostal blessing even in the darkest hours of church history, and which swelled into a tremendous flood of Pentecostal power in this Latter Rain Outpouring.

B. PENTECOSTAL REVIVALS THROUGHOUT HISTORY:

Iranaeus lived in the second century and wrote, “We hear many brethren in the Church having prophetic gifts, and speaking in all sorts of languages through the Spirit.”
He was a pupil of Policarp, who was a disciple of the Apostle John.

Tertullian also lived in the second century. He left the record that spiritual gifts, including the speaking in tongues, were manifested in the church.

Justin Martyr also lived in the second century. He wrote that spiritual gifts were active in the church.

Chrysostom lived in the latter part of the fourth century and early fifth century. He wrote, “Whoever was baptized in Apostolic days, he straightway spoke with tongues . . . and one straightway spake in the Persian language, another in the Roman, another in some other tongue . . . ”

Augustine lived in the fourth century. He wrote the following: “We still do what the Apostles did when they laid hands on the Samaritans and called down the Holy Spirit on them in the laying on of hands. It is expected that converts should speak with new tongues.

The Encyclopedia Brittanica states that glossolalia (speaking in tongues) “recurs in Christian revivals of every age, e.g. among the mendicant friars of the thirteenth century, among the Jansenists and early Quakers, the converts of Wesley and Whitefield, the persecuted Protestants of Cevennes, and the Irvingites.” (Volume 27, pages 9-10, 11th edition).

The Waldensans were a religious people who were persecuted by the Roman Church. Both healing and speaking in tongues were experienced in their midst during the 12th and 13th centuries.

In 1685 Louis XIV revoked the Edict of Nantes which had given religious freedom. He attempted to force all Protestants into the Roman Church. John Cavalier led the Huguenots into inaccessible mountains. There are records both by friends and enemies that these persecuted people spake in tongues.

In Sauer’s “History of the Christian Church” he wrote: “Dr. Martin Luther was a prophet, evangelist, speaker in tongues, interpreter, and in one person, endowed with all the gifts of the Spirit.”

In Schaff’s “History of the Christian Church” (1882 edition, page 237) he wrote that speaking in tongues took place from time to time in seasons of special religious revivals among the early Quakers and Methodists.

Thomas Walsh was one of Wesley’s prominent preachers. He wrote in his dairy of March 8th, 1750: “This morning the Lord gave me language I knew not of, raising my soul to Him in a wonderful manner.”

C. PENTECOST IN THE NINETEENTH CENTURY:

Edward Irving was a young Scottish minister who was an eloquent and scholarly preacher. He pastored in London and became quite famous.

In Scotland there lived twin brothers, James and George MacDonald. Their sister lay in bed in a dying condition. She prayed that James might be endowed with the power of the Holy Ghost. In 1830 James was filled with the Holy Ghost, and commanded his sister to rise from the bed and she was instantly healed. Shortly after this Miss Mary Campbell received a marvelous outpouring of the Holy Spirit upon her. Thus a Pentecostal revival broke out in Scotland in 1830.

In 1831 Mary Campbell married W.R. Caird planning to go to the foreign mission field. In London they visited Edward Irving’s church. Through their testimony an increased emphasis was placed upon the ministry of the Holy Spirit. Prophecy, the gift of tongues and the interpretation of tongues, were manifested in the services.

Through persecution Irving was forced to withdraw and form a Church organization, “Catholic and Apostolic Church.” At that time there were thirty congregations and six thousand followers.

In 1834 Edward Irving died and the movement gradually fell apart. Within thirty years the gift of tongues ceased to be heard and ritualism took the place of the power of God.

This movement died mainly because they failed to realize that there was an experience of the Baptism of the Holy Ghost and that the initial evidence was speaking in tongues.

In the Finney revivals people were slain under the power of God. Prayer meetings sometimes ran all night. Many people were healed. Others saw visions of heaven or of hell. Occasionally people spoke in tongues.

Under the ministry of D.L. Moody thousands were converted. In proof that sometimes the Pentecostal outpouring was experienced, we quote from a book written by Dr. Robert Boyd in 1876: “On the following Sunday night, when I got to the rooms of YMCA, I found the meeting on fire. The young men were speaking with tongues and prophesying. What did it all mean? Only that Moody had been addressing them that afternoon.”

D. NINETEENTH CENTURY REVIVALS WHICH PREPARED THE WAY FOR THE PENTECOSTAL REVIVAL:

In the latter part of the nineteenth century higher criticism had entered the ranks of the formal, historical churches. As a result personal piety was becoming a thing of the past.

During this time God raised up the Salvation Army under General Booth and other groups such as the Free Methodists who were reaching out after deeper spiritual experience. This was followed by Holiness Revivals in England, the United States and Canada. At the close of the nineteenth century some twenty-five separate Holiness denominations came into existence.

These Holiness Revivals certainly did much to prepare the way for the Pentecostal Revival of the Twentieth century. It was chiefly among these Holiness groups that the Holy Ghost was outpoured.

Dr. A.B. Simpson who founded the “Christian and Missionary Alliance” preached Divine Healing for the body.

Another minister who did much to help restore the ministry of Divine Healing to the church was Alexander Dowie. In 1900 he established a new city called Zion not far from Chicago. He was arrested 100 times for praying for the sick. Thousands were healed under his ministry. He published a magazine called “Leaves of Healing” which carried the message of healing to distant points.

State whether the following is TRUE of FALSE:
1. Thomas Walsh assisted Finney in his revivals.
2. In 1831 Mary Campbell married Edward Irving.
3. Augustine lived in the fourth century.
4. Edward Irving died in 1834.
5. Iranaeus was a pupil of Polycarp.
6. Dr. A. B. Simpson established the city of Zion.

7. The Holiness revivals helped to prepare the way for the Latter Rain Outpouring.
8. The Huguenots were led by Martin Luther.
9. In the Finney Revivals people were heard to speak in tongues.
10. A Pentecostal revival broke out in Scotland in 1830.
11. Louis XIV attempted to force all Protestants into the Roman Church.
12. Dr. Simpson published a magazine called “Leaves of Healing.”
13. Tertullian lived in the fourth century.

14. There was a small stream of Pentecostal blessing in the darkest hours of Church History.
15. Irving’s church was called “Catholic and Apostolic Church.”

If you wish to obtain your AIS Bible and Theology Certificate or work toward your B.A. Degree from Indiana Bible College, complete this Self-Help Test as completely as possible and return it to: AIS, P.O. Box 47917 Indianapolis, IN 46247 or email it to: ais@apostolic.edu or fax it to: (317) 781-7700.