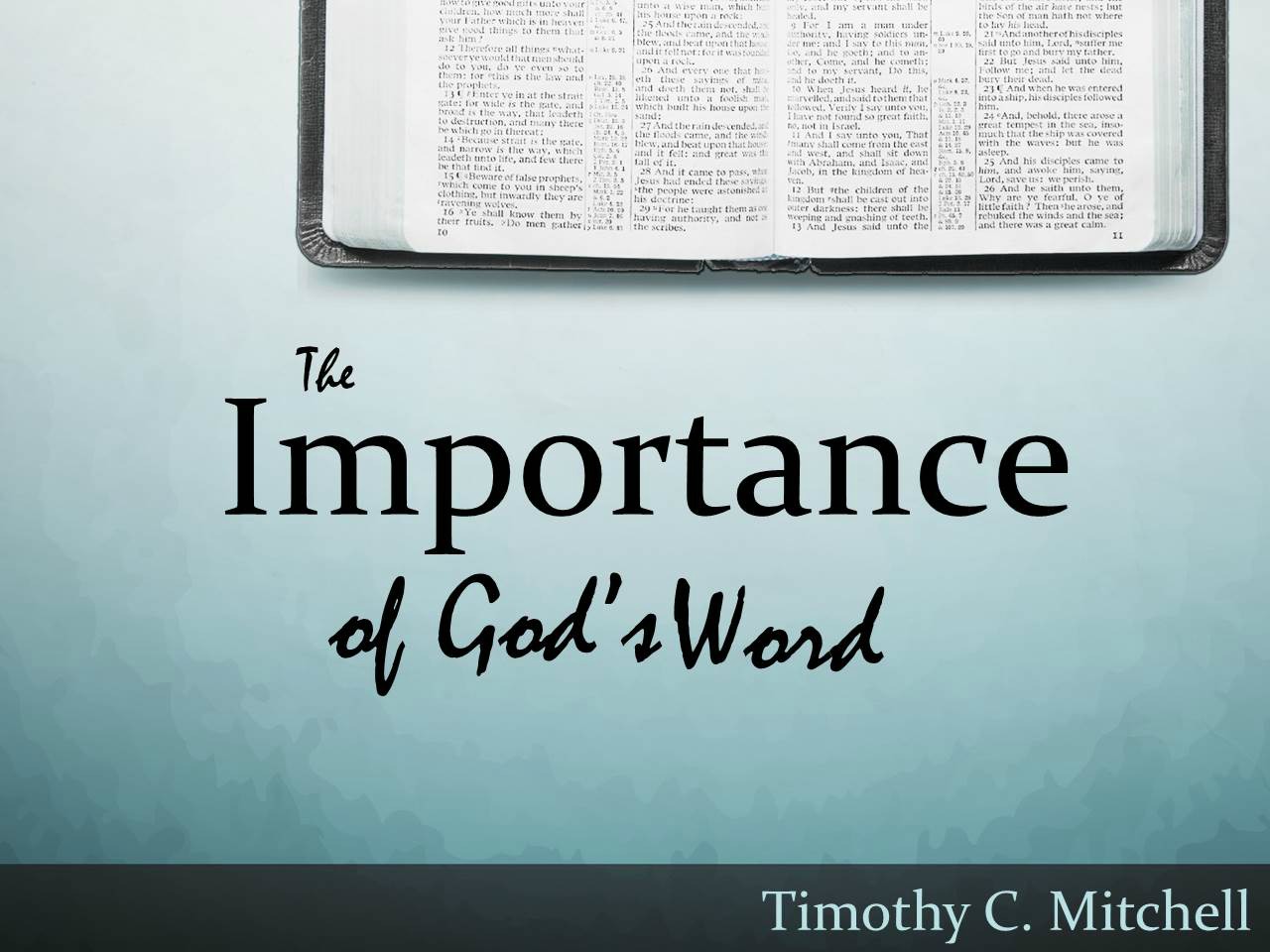 You cannot separate a person from his word. They are one and the same. So it is with God. In the Old Testament, God communicated with us primarily through His written or spoken Word. In the New Testament, God chose to reveal Himself to man in a new way or manifestation. He robed Himself in flesh and made known to us His new Name, Jesus. God became the Living Word and dwelt among us.

On judgment day, there will be an open book test. This is where the “test paper” of our lives will be compared to the answers found in God’s textbook, the Bible. For example, His Book says that we should not lie. He will then look in the book of our life to see if we have or have not. It is very important to know what the Bible says because the Book, not denominational or personal beliefs, will be the source from which we are judged.

There is no such thing as two people having a different interpretation of a particular verse of scripture. The Bible very plainly says what it means and means what it says. For example, in math, one plus one is two no matter who is reading the textbook.

Neither man nor religion should add or take away from God’s Word. This same warning was mentioned after the 10 Commandments were given in Deuteronomy 4:2.

The Bible is like a library of 66 books. We need to know where to go to find the information that we are looking for. Here is a simple guide to the New Testament.

If we understand to whom and why these scriptures were written, we will not misapply them. For example, some have used scriptures in Romans to form their plan of salvation. This is not a correct application. Romans was written to people who were already saved. The Book of Acts is where you will find the only plan of salvation.

Here are some questions to inspire thought.

Paul instructed the young minister he was training to preach from the Bible and not substitute denominational or social issues for truth. He prophesied that the time would come (and now is) when people would not want to hear morally correct or godly-based doctrine and would turn from the Truth to carnal, man-made ideas such as humanism, evolution and situational ethics etc. Today, many people only want to hear positive “make me feel good about myself” preaching. They do not want to be told they are wrong or feel conviction for their sins. Like a dog, they want their ears scratched.

The way to hell is wide because the majority will go down the road that allows them the freedom to do their own thing. The way to life everlasting is very narrow and confining with some restrictive rules that require total commitment. Notice that few will find the right way. The Bible says that our day will be just like it was in the days of Noah. Of the millions probably living in Noah’s day, only 8 people were saved! (See I Peter 3:20.) Only a few will be saved today because many do not want a church that tells them what they can or cannot do. This is the reason why there are so many false religions offering varying commitments to Christ from very little to a lot. It is true in religion also; the value of what we get matches what we are willing to pay.

These preachers are hirelings. They look good on the outside but in reality what they have on has been obtained from “skinning the sheep.” Money is their goal. In time, their real motives and morals will be exposed. If you are going to support a ministry, give to a local Church you attend. They are the ones who will be there to minister to you personally when you need them.

[The following are some of the most shocking scriptures in the Bible!]

Notice that all this was done “in His Name.” Someone may ask, “Why does Jesus allow this to happen if He does not approve of his or her doctrine or lifestyle?” The answer is simple. Jesus is going to honor prayer and will reward faith directed toward Him. For example, imagine that a certain lady with a physical ailment goes to a healing campaign. Even though the preacher is a fake, God can honor this lady’s sincere faith and heal her. (See Mark 9:38-39.)

Even people possessed of evil spirits can speak truth and be used of God, but this does not verify them or their cause. (Read I Samuel 28:7-19, Acts 16:16-18.) Our ability to discern truth from error must be firmly anchored by knowing what the Bible says. In the last days, the false prophet will call fire down from heaven and deceive everyone into worshipping the Anti-Christ and receiving the dreaded Mark of the Beast. The Scripture says that even the spirits of devils will be working miracles during this time (Revelation 16:13-14). If it is possible, even the very elect may be deceived by this display of “religious” power (Revelation 13:11-18; Matthew 24:24).

What a shock it will be to some religious people when they stand before Jesus on judgment day and hear Him say that He does not even know them and sends them to hell. These are people who had a casual relationship with Christ and served Him because of duty or personal benefit. They were not completely committed. They did not wholeheartedly seek Him with all their soul, mind and strength.

It is unique that the same word “know” is used in the Old Testament describing the intimate relationship between a man and a woman when conceiving a child. (See Genesis 4:1, 17, 25.) When we know and obey the Original New Testament Plan of Salvation, He will enter and fill us with His Spirit. Only then are we truly one with Him and are known of Him. This is the difference between being a friend of the Bridegroom and being married to Jesus as part of His Bride, the Church.

There are two important points made in these verses:

Today many denominations have sprung up offering compromises of the truth. (A denomination is a religious belief that embraces a part or fraction of the truth.) Some combine a bare minimum of truth with a preponderance of manmade creeds. Others preach much truth but still overlook perhaps just one important doctrine. Just as the answer to a math problem can be wrong because we omitted or did one step incorrectly, so our salvation can be void because we did not correctly complete all required in the Word. (See James 2:10.) We can’t be just 99% right but 100% right. Thank God for churches who are still preaching the whole gospel!

In the beginning there was only one church with one plan of salvation. People did not have a choice of which “brand” of church to go to. Today, we must read in the Bible about that original Church founded in the book of Acts. Then we should go and find the church today that is preaching and practicing that same gospel today!

Someone asked, “How can what is being preached today not be truth?” It is like telling something to someone on the front pew of a church and asking him or her to tell the person sitting next to them. By the time it circulated and reached the back pew, it probably would not be the same as was told originally. The plan of salvation was given once on the day of Pentecost. Today, after 2,000 years of churches with people adding and subtracting according to their beliefs, one can hardly recognize what was originally said. We must search the Scriptures and find out what is Truth!

This article “The Importance of God’s Word” by Timothy C. Mitchell was excerpted from the book The Way More Perfectly. March 2011. It may be used for study & research purposes only.

1 thought on “The Importance of Gods Word (Entire Article)”