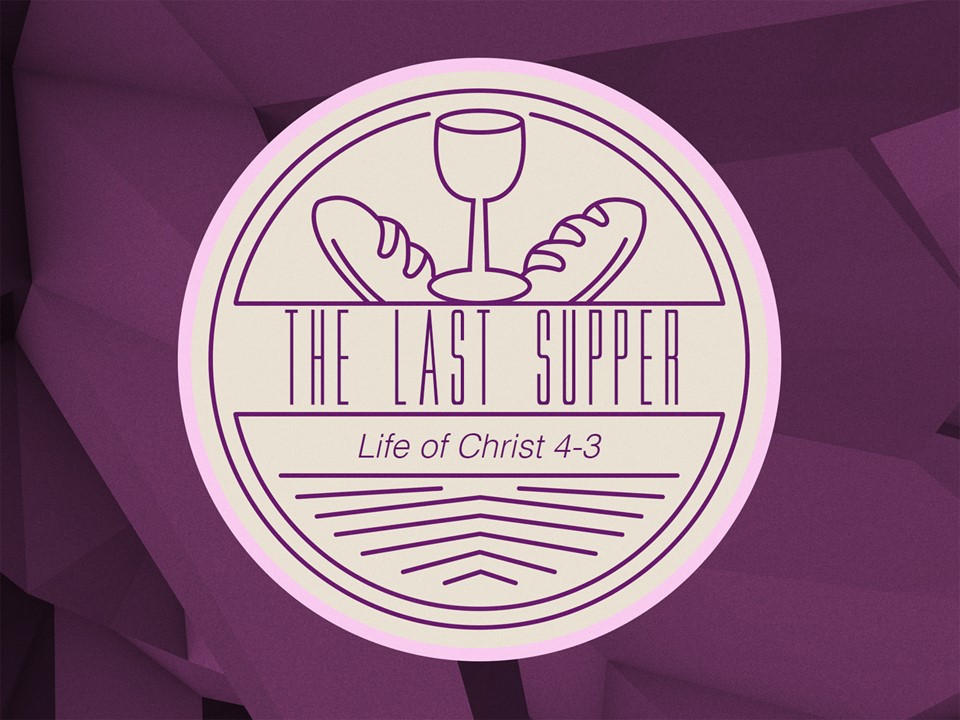 A. THE UPPER ROOM:
When the disciples asked Jesus, “What do you wish that we go and make ready that you may eat the passover?” He quietly gave Peter and John detailed instructions. Judas had already plotted for the betrayal and Jesus was quite aware of this act of treachery. Therefore the meeting place for the celebration had to be kept secret.

Jesus told His disciples that they would meet a man bearing a pitcher. It was very unusual for a man to bear a pitcher for the women did this. They were to follow this man and when they came to the house they were to say to the houseruler, “Where is the guest chamber, where I shall eat the passover with my disciples?” They would be shown a large Upper Room already furnished with mats, table, couches, etc. Peter and John did as they were told and made ready for the Passover meal.

This Upper Room was in the home of a wealthy man, undoubtedly, either the father of John Mark or Joseph of Arimathea.

B. THE PASSOVER MEAL:
The Passover meal followed a definite routine:
1. A benediction,
2. A cup of wine,
3. The hands of the company washed, the master of the feast passing the basin, while reciting a prayer,
4. Bitter herbs dipped in sauce and eaten,
5. The lamb brought in with other portions of the meal,
6. A benediction and second eating of bitter herbs,
7. A second cup of wine with questions and answers as to the origin of the feast,
8. Singing of the first part of the Hallel (Psalms 113, 114),
9. A benediction,
10. The master of the feast washes his hands and makes a sop by wrapping a bit of lamb with unleavened bread in bitter herbs and dipping it in the sauce, for each one present in turn,
11. Each eats as much as he likes, finishing with a piece of the lamb,
12. The washing of hands,
13. A third cup of wine,
14. Singing of second part of Hallel (Psalms 115 – 118),
15. A fourth cup of wine.

The Passover meal was one of symbolism and every part had religious symbolism.

C. JESUS WASHED THE FEET OF HIS DISCIPLES:
We are not certain just when during the Passover meal that this took place. It would seem that it took place during the supper. It is quite probable that Jesus substituted the foot washing for the washing of hands.

The disciples were not in a condition to partake worthily of this last solemn meal with Jesus and to hear His last words. Judas had already agreed to betray Him. There was a false ambition, pride, jealousy and ambition in the hearts of the others. “And there was also a strife among them, which of them should be accounted the greatest” (Luke 22:24).

It was customary for Jews on all occasions of feasting to have the feet washed before sitting down to eat, this service being performed by a servant. At this feast no servant was present and no disciple had offered to wash the feet for none wanted to be a servant. In washing their feet, Jesus administered a rebuke to them that they would never forget.

This act gave a picture of Christ’s redemptive work. His removing of the outer garments spoke of His laying aside His Heavenly glory, and the girding with a towel spoke of His taking the place of a servant. His stooping to the feet of the disciples spoke of the humiliation of Calvary and the cleansing of the souls of sinners.

After He finished He gave them instructions regarding the future: “For I have given you an example, that ye should do as I have done to you…If ye know these things, happy are ye if ye do them” (John 13:15-17).

D. JESUS DECLARED JUDAS AS THE TRAITOR:
When Jesus came to the eating of bitter herbs, dipped with bread in sauce and made into sop, He paused and made a solemn announcement which startled His disciples: “I tell you, one of you will betray me.” They became anxious and suspicious, and began to try to find out who might be the guilty one. To gain revealing of the traitorous act each of the disciples asked in great agitation, “Lord, is it I?” The suspense is terrible and Peter can endure it no longer. He begs John to discover who shall be the betrayer. In reply to John’s question, Jesus confided, “It is he to whom I shall give the sop after dipping it.” According to custom this would indicate special honor.

When Jesus did this Satan took complete possession of Judas and he knew that his act of betrayal was known. Jesus now said to him, “That thou doest, do quickly” (John 13:27). Judas went out immediately, and it was night. What a dark night it was for Judas! What a dark night it would be also for Jesus and the other eleven disciples!

E. JESUS INSTITUTES THE LORD’S SUPPER:
Towards the end of the Passover Supper Jesus instituted the Lord’s Supper which was to be observed as an ordinance of the church. This ordinance was to have much significance. Water Baptism was an ordinance instituted to stand for the beginning of a Christian’s life, death to sin and resurrection to a new life. The Lord’s Supper was to stand for the continuation of the Christian’s spiritual life. It was to speak of the continuous assimilation of Christ who is our bread of life, our Passover. It was to stand for the truth that the very life of Jesus must be appropriated in a constant process.

The Lord’s Supper is a memorial of the redemptive death of Jesus. It also constantly pointed forward to the return of our Lord for His church.

In instituting the Supper Jesus took a loaf, gave thanks, broke it, and gave to His disciples, and said, “Take, eat; this is my body.” Then He took a cup containing the fruit of the vine, and said, “Drink ye all of it; For this is my blood of the new testament, which is shed for many for the remission of sins. But I say unto you, I will not drink henceforth of this fruit of the vine, until that day when I drink it new with you in my Father’s kingdom” (Matthew 26:26-28).

It is quite significant that the phrase, “fruit of the vine” is used. Some students may differ with the writer of these Bible notes, but it is the writer’s convictions that it is useless to try to prove that this refers to fermented or unfermented wine. The writer is familiar with both arguments and is convinced that only an issue is created. The minister’s personal convictions should guide him in this matter.

F. THE LAST SUPPER CONCLUDED:
After Jesus instituted the Lord’s Supper Jesus gave His disciples His farewell message, which was one of His most important discourses of His entire ministry. The next lesson in this Bible Course deals with this farewell message.

Finally the supper concluded with the singing of a hymn. They now leave the Upper Room and go down into the deserted street below and make their way out to the Garden of Gethsemane.

A. Where was the Upper Room?

B. Describe the routine of the Passover Meal.

C. Write a paragraph describing the scene of Jesus washing the feet of His disciples.

D. What spiritual lessons are taught by the ordinance of the Lord’s Supper?