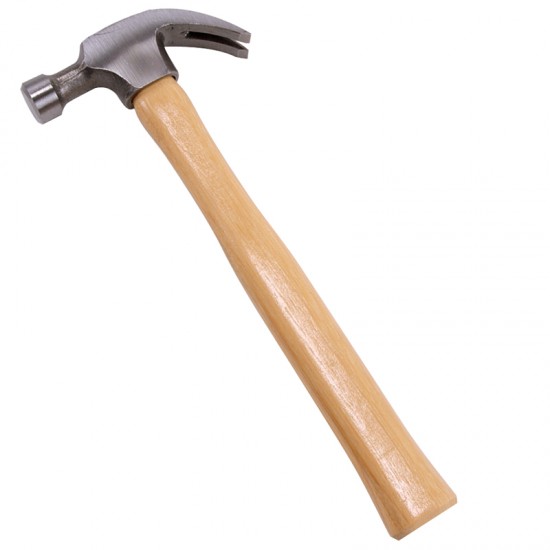 Not long ago a man was operating a piece of construction equipment, digging gravel out of a creek to use in repairing a driveway. While spreading the gravel, he noticed something that obviously was not stone. Upon closer examination he found that it was an old ball-peen hammer head. Ironically, he did not simply throw it away but for some reason, carried it to a neighbor who is an eccentric old craftsman.

For months it lay in the old man’s wood-shop. Occasionally he would pick it up and look it over, each time laying it aside again. Being an eccentric, he has to be in the ‘right mood’ before he will undertake a project. One day he picked it up and began to work on it. He cleaned away decades of rust and corrosion. What he found underneath was a quality hammer.

Part of the old hammer-handle was still imbedded in the hammer. Still intact was the original metal wedge that was used to tighten the handle securely into the hammer. Again, being the eccentric that he is, he crafted a handle for his ‘new’ hammer out of a piece of an old mop handle. He used the wedge to fit the new handle properly.

Being close to the old man, he tried several times to tell me the “Legend of the Hammer” but I was not interested. After all, it was just a hammer; and I had many things on my mind that were much more important.

This changed recently and I began to question him for more details about his hammer. After he restored it, it became his favorite hammer. What is odd about that is that it is unusual for a carpenter to use a bail-peen hammer instead of a claw-hammer. A ball-peen hammer is normally used by mechanics, especially for making gaskets.

There were four things that he told me about the hammer that especially caught my attention.

In what literary scholars would call “personification,” that is, giving human attributes to an inanimate object, I began to see many people, myself included, who are just like that old hammer. I wondered, “How did that hammer get into the creek?” Was it thrown there on purpose by someone who was angry? Did it accidentally fall off of a wagon or bounce off of a truck bed? These are questions for which we will never have an answer.

Now let us look at the story found in 1 Samuel 30:11-16. And they found an Egyptian in the field, and brought him to David, and gave him bread, and he did eat; and they made him drink water; And they gave him a piece of a cake of figs, and two clusters of raisins: and when he had eaten, his spirit came again to him: for he had eaten no bread, nor drunk any water, three days and three nights. “And David said unto him, To whom belongest thou? and whence art thou? And he said, I am a young man of Egypt, servant to an Amalekite; and my master left me, because three days agorae I fell sick. “We made an invasion upon the south of the Cherethites, and upon the coast which belongeth to Judah, and upon the south of Caleb; and we burned Zik-lag with fire. And David said to him, Canst thou bring me down to this company? And he said, Swear unto me by God, that thou wilt neither kill me, nor deliver me into the hands of my master, and I will bring thee down to this company. And when he had brought him down, behold, they were spread abroad upon all the earth, eating and drinking, and dancing, because of all the great spoil that they had taken out of the land of the Philistines, and out of the land of Judah.

This is the account of a nameless Egyptian youth who was a servant (slave) to an Amalekite. (Had King Saul obeyed God, this story would never have taken place.) He was cared for and fed by his master as long as he had value to his master. When he could no longer benefit his master he, as the nameless, faceless hammer in this legend, was simply cast aside and forgotten by humanity!

For the purposes of my interpretation of the legend, the creek represents the flowing masses of humanity. It is ever flowing, carrying along with it the flotsam and jetsam of sin, never knowing or caring who it is bruising, scarring, and indelibly marking for life. Is it a teenage girl, surviving a broken home, abandoned by her mother, being taken advantage of by an unscrupulous suitor? Or perhaps an innocent little child who bears the bruises and scars of beatings, scaldings, and cigarette burns? When anyone is no longer of value to Satan, he will then cast that person aside as this Egyptian was cast aside.

For three days and nights he had had nothing to eat or drink. He was sick; actually he was dying. The best thing that ever happened to him was to be found by David and his band of men. Logically thinking, you would think that this would have been the worst thing that could have happened to him. By his own confession, he had participated in burning Ziklag and carrying off the wives and children of David’s band of men. He could only expect death.

But the shepherd-boy of Israel did what came naturally to him. Immediately he gave his enemy bread and water to revive him and then gave him fig-cake and two clusters of raisins to restore his strength. All of this was done before he questioned his captive.

The fugitive knew that his life was still in mortal danger. He agreed to show David where he could find his people if David would agree not to kill him and not to give him back into the hand of his former master. He was much like The Legend of the Hammer. He had been cast away by humanity, abandoned to die in the wilderness, alone. … without Christ …having no hope, and without God in the world: Ephesians 2:12.

The unscrupulous nature of Satan and sin is found in the closing scene of this drama. When they came upon the Amalekites they were spread abroad upon all the earth, eating and drinking, and dancing. You mean nothing to

Satan. In fact; …your adversary the devil, as a roaring lion, walketh about, seeking whom he may devour. He is clear in his purpose. … the thief cometh not, but for to steal, and to kill, and to destroy: John 10:10.

Thank God, there are countless people like myself that God has dug out of the creek and cleaned us up. He restored us. He gave us balance in our lives. Now we have the ‘ring’ that only comes with being filled with the Holy Ghost; the old timers called it the “Jerusalem ring.” We still bear the scars, scratches, and bruises that we acquired while in the creek. But we now have a special resting place in God’s kingdom. He knows where we are and how to use us for his purpose. He could have found many who were much more qualified than I. More gifted, more capable, and much more adroit and accomplished. But none more thankful to feel the Master-Craftsman’s hand on his life!