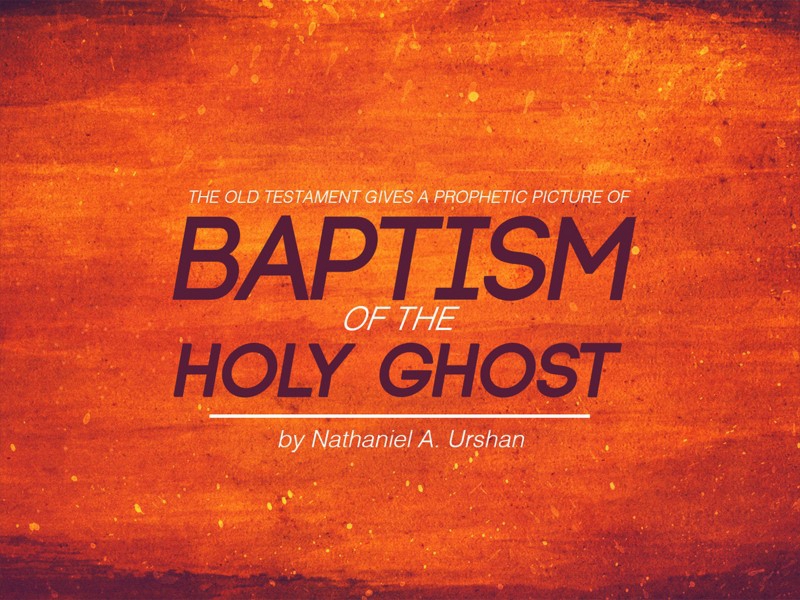 By Nathaniel A. Urshan

The Old Testament gives a picture of the Baptism of the Holy Ghost in a series of prophetic utterances. Let us consider two of them.

First, Isaiah 28:11-12, “For with stammering lips and another tongue will he speak to this people. To whom he said, This is the rest wherewith ye may cause the weary to rest; and this is the refreshing: yet they would not hear.”

The second prophecy is in Joel 2:28, 29: “And it shall come to pass afterward, that I will pour out of my spirit upon all flesh; and your sons and your daughters shall prophecy, your old men shall dream dreams, your young men shall see visions; and also upon the servants and upon the handmaids in those days will I pour out my spirit.”

The prophecy of Isaiah is addressed definitely to Israel. The prophecy of Joel is also addressed to Israel, but it tells of God’s plan to pour out His spirit upon all flesh. Seven hundred years before Jesus Christ came to earth the spirit of prophecy declared that the spirit of God should afterward be poured out upon all flesh, and that the gift of the Holy Spirit would be attended with the evidence of speaking in other tongues.

Is there then to be a difference between the way in which the Holy Spirit was given to the Jewish believer in the beginning of the church at Jerusalem and the way in which it shall be received by the Gentile believers through­out the world?

Let us examine the record of the first outpouring of the Holy Spirit on the Day of Pentecost. It was on that day that the first one hundred twenty disciples were baptized with the Holy Ghost and fire.

“When the day of Pentecost was fully come, they were all with one accord in one place. And suddenly there came a sound from heaven as of a rushing mighty wind, and it filled all the house where they were sitting. And there appeared unto them cloven tongues like as of fire, and it sat upon each of them. And they were all filled with the Holy Ghost, and began to speak with other tongues, as the Spirit gave them utterance. And there were dwelling at Jerusalem Jews, devout men out of every nation under heaven. Now when this was noised a­broad, the multitude came together, and were confounded, because that every man heard them speak in his own language. They were all amazed and marvelled, saying one to another, Behold, are not all these which speak Gali-leans? And how hear we every man in our own tongue, wherein we were born?” (Acts 2:1-8).

They were all amazed. They were in doubt. They said one to another, “What meaneth this?” Others mockingly said, “These men are full of new wine.” “But Peter, stand­ing up with the eleven, lifted up his voice, and said unto them, Ye men of Judea, and all ye that dwell at Jerusalem, be this known unto you, and hearken unto my words: for these are not drunken, as ye suppose, seeing it is but the third hour of the day; but this is that which was spoken by the prophet Joel; and it shall come to pass in the last days, saith God, I will pour out of my Spirit upon all flesh, and your sons and your daughters shall prophesy, and your young men shall see visions, and your old men shall dream dreams; and on my servants and on my handmaidens I will pour out in those days of my Spirit; and they shall prophesy” (Acts 2:12-18) .

Notice closely the words of Peter: “This is that which was spoken by the prophet Joel.” You will remember that Joel’s prophecy was the universal prophecy that God would pour out His Spirit, not merely upon the Apostles, not only upon the Jews, but upon all flesh.

Why did the Apostle Peter choose to quote from the prophecy of Joel when he was called upon to explain the miracle of speaking in other tongues as the disciples were filled with the Holy Ghost? Would it not have been much more logical to have quoted the prophecy of Isaiah? The prophecy of Joel said nothing about speaking with other tongues. The phenomena of speaking with tongues was the immediate cause of the question that was asked of the Apostles: “What meaneth this?” The prophet Isaiah fore­told the manner of the giving of the Holy Spirit with the evidence of speaking in other tongues. And yet, though Isaiah’s prophecy definitely identifies speaking with other tongues with the gift of the Holy Spirit, the Apostle Peter did not use that scripture to explain the miracle of Pente­cost. Was there a reason for this? Most assuredly yes. This man was speaking under the anointing of the Holy Spirit. The Holy Spirit of God put into Peter’s mind the prophecy of Joel rather than that of Isaiah, so that all of the Jews, men from every nation under heaven might know that this gift which was given to the Jewish believers on the day of Pentecost was for all believers in every nation.

The last portion of the tenth chapter of Acts tells of the ministry of the Apostle Peter to the household of Cor­nelius. It was the first experience of the Apostle Peter in bringing the Gospel message of salvation to a group of Gentiles. He had been definitely instructed to go to the home of the Gentile believers and there to preach the Gospel of Jesus Christ; Peter had received his instructions in a vision.

When the entire household was assembled to hear the message of the Apostles of Jesus, the man of God began to speak and said, “Of a truth I perceive that God is no respecter of persons: But in every nation he that feareth him, and worketh righteousness, is accepted with him. The word which God sent unto the children of Israel preaching peace by Jesus Christ: (he is Lord of all:) That word, I say, ye know, which was published throughout all Judea, and began from Galilee, after the baptism which. John preached; How God anointed Jesus of Nazareth with the Holy Ghost and with power: who went about doing good, and healing all that were oppressed of the devil; for God was with him.” Peter continued by saying, “And we are witnesses of all things which he did both in the land of the Jews, and in Jerusalem; whom they slew and hanged on a tree: Him God raised up the third day, and shewed him openly; Not to all the people, but unto witnesses chosen before of God, even to us, who did eat and drink with him after he rose from the dead. And he commanded us to preach unto the people, and to testify that it is he which was ordained of God to be the Judge of quick and dead. To him give all the prophets witness, that through his name whosoever believeth in him shall receive remission of sins. While Peter yet spake these words, the Holy Ghost fell on all them which heard the word. And they of the circumcision which believed were astonished, as many as came with Peter, because that on the Gentiles also was poured out the gift of the Holy Ghost. For they heard them speak with tongues, and magnify God” (Acts 10: 34-46) .

Then answered Peter, “Can any man forbid water, that these should not be baptized, which have received the Holy Ghost as well as we?” The Apostle Peter recognized that these Gentiles believers had received identically the same experience as had the Jewish disciples on the day of Pen­tecost. His own promise, given on the day of Pentecost under the inspiration of the Holy Ghost, was being fulfilled before his very eyes, for on the day of Pentecost he had said under God’s anointing: “The promise (of the Holy Ghost) is unto you, and to your children, and to all that are afar off, even as many as the Lord our God shall call” (Acts 2:39).

There is only one place in the New Testament where we have a record of an Apostle quoting the prophecy of Isaiah to explain the phenomena of speaking in other langauges in the New Testament church. And strange as it may seem, it was not to a Jewish congregation nor to a church in Israel that the words were written; but this prophecy of Isaiah, which was directed by that prophet definitely to Israel, was appropriated by the Apostle Paul for the edification of the Gentile church at Corinth. Notice the reading there: “Brethren, be not children in under­standing, howbeit in malice be ye children, but in under­standing be ye men. In the law it is written, With men of other lips will I speak unto this people, and yet for all that will they not hear me, saith the Lord” (I Corinthians 12: 20-21) .

The entire fourteenth chapter of I Corinthians is de­voted to the explanation of the operation of the Holy Spirit, its manifestation and its gifts in the New Testament church. The Apostle Paul very plainly states, and simply explains, that the operation of speaking with other tongues in the Corinthian church in the city of the Gentiles was in fullfillment of Isaiah’s prophecy to Israel. What are we to con­clude from this? There is only one conclusion, and that is that in Christ Jesus and in His New Testament church there is neither Jew nor Gentile. The middle wall of parti­tion, thank God, has indeed been broken down. There is not left one foundation for those teachers or preachers who would claim and teach that the baptism of the Holy Spirit, with the evidence of speaking in other tongues, was only for the Jews or only for a select few in the days of the Apostles.

The Old Testament gave two definite promises concern­ing the baptism of the Holy Spirit. That of Isaiah was local, addressed to Israel. The other, that of Joel, was universal, promised to all flesh. The Apostles used these prophecies interchangeably, ascribing to the Gentile Christians the promise that was given to Israel, and applying to the Jews on the day of Pentecost Joel’s universal prophecy.

From these precious scriptures may every believing heart take hope and faith and courage in knowing that you, as an individual, can know the deeper walk with God and may receive that inner experience of the heart where the Spirit of Christ dwells and reigns and where God baptizes with the Holy Ghost and power.

The above article, “The Old Testament Gives a Prophetic Picture of the Baptism of the Holy Spirit” was written by Nathaniel A. Urshan. The article was excerpted from Urshan’s book, These Men Are Drunk! Pages 9-14.