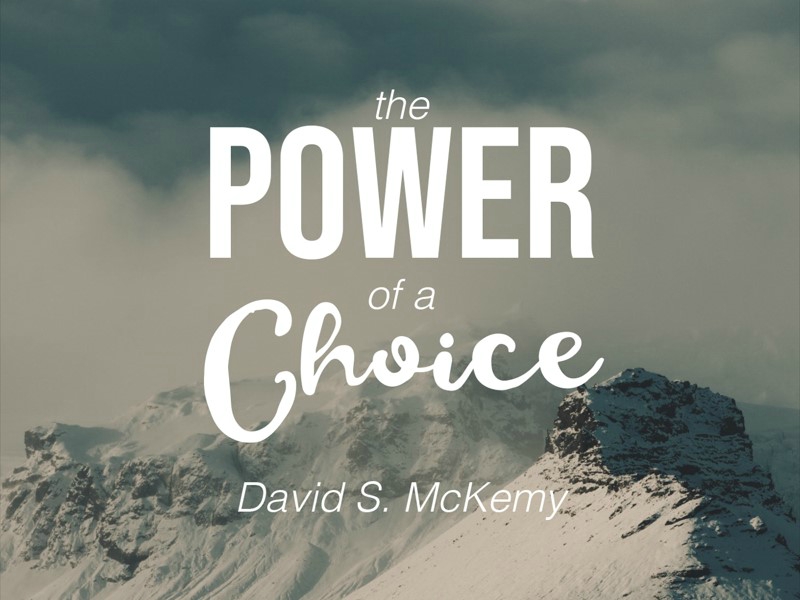 The power of a choice is amazing. You’re reading this book right now because you chose to. Nobody made you buy it, pick it up, and read it. You chose to! This author is grateful you did!

The shirt you have on right now is one you picked out for the day. If your shoes hurt your feet; it was you who put them on. If you don’t like your car, no one made you buy it. Life is made up of two things when boils right down to it – good choices and bad choices. Usually from one of those come the experiences you have in your life.

If you’re successful in life, it’s no doubt because you educated yourself in a plan to get a good job. If you’re unsuccessful, it could be due to poor planning or bad choic­es you’ve made. If you’ve received the Holy Ghost and been baptized in Jesus name, I rejoice with you in the wise decision you made. This was also a choice. It didn’t hap­pen all by itself. It was a very calculated choice on your part.

In Selma, Alabama, the civil rights movement began because a little lady by the name of Rosa Parks decided she was not giving up her seat and going to the back of the bus. Who would’ve dreamed that a decision such as that one would end up starting a chain reaction of events that still affects us to this day? It’s all in the power of a choice.

The Lord made a powerful choice in our salvation. He decided to leave the heavens, wrap himself in flesh, and dwell among men. He came knowing the incredible price He’d pay and made up His mind to save us. That’s the most powerful choice ever made.

The Lord is powerful, and there is nothing He cannot do. There are no words to describe His greatness and His majesty. There are no limits to what He can do…or are there? I’m afraid there are some limitations! They are self-imposed limits, but there are some. And that is simply this, over pow­ering our power of choice. He’ll never violate your will and stop you from doing anything. He won’t force you to live for Him.

The most powerful forces on earth are the forces of nature – wind, waves, storms, etc. Yet He more than proved Himself when with one word from Him the winds and waves ceased. There is no effort at all by God. Just speaking or thinking it, and it is done. His power is endless and lim­itless. Yet by His own choice, He will not violate the will of a man or woman.

And what He has chosen not to do, He won’t allow the devil to do. This means since the Lord won’t force you to live for Him, He won’t allow the devil to force any decision or lifestyle on you either. The choice is left up to the indi­vidual. Regardless of what anyone wants to admit, our eter­nity is determined by each individual’s decision. It’s a con­scious choice that has been weighed out and calculated. The only one responsible for the destiny of your soul in eternity is you alone.

I’m not saying it can’t be influenced just as a commercial on a radio station would try and sway you to use their prod­uct. The bottom line is that you’re the one who the choice is left to. If you bought into a lie, it was still your choice. So here’s what I’m trying to say in this chapter: we should approach every backslider with the frame of mind we’re going to get them back. This isn’t an unrealistic approach but one of faith. Just remember, the decision belongs to the person you’re trying to reach.

If we could decide for them, we would just put them all back in church, but that’s not how it works. You’ve fulfilled your burden by trying to reach them and once you have done this, the rest is up to them. They could potentially break your heart by making the wrong choice, and you will feel the urge to continue reaching and praying for them.

Just be careful not to feel a sense of guilt or failure at the task you set out to do. This can cause you to feel what it’s useless and perhaps cause you to stop reaching for them. If we were in a position to succeed at reaching anyone we set out to reach, there wouldn’t be anymore lost souls.

We need to reach out like there’s no tomorrow and yet realize we’re only messengers of the Lord. We don’t have the ability to save or change someone’s life; we just have a power of influence. Just be open to let the Lord use you and anoint your words. Don’t get discouraged and feel you’re not getting the desired results. Reaching a backslider is a very delicate matter.

Backsliders are all different and have to be dealt with individually. There’s not set pattern or mold that they fit in. What might work for one may not work for all of them. That’s why we need to be sensitive to the Holy Ghost and depend on Him for the wisdom in our approach to reach them.

Sometimes it’s the smallest things that tug on the heart of a backslider. It could be a card that was sent at the right time or a phone call. Reaching out to a backslider can be something very simple and require very little time, and yet the Holy Ghost can take your sincerity and use it to bring conviction.

Just be open and available to the Lord to reach out to the backslider, and He’ll use you. Keep in mind that some might respond the first time you reach for them, come to church, and pray back through. Yet others could take countless attempts to reach them.

I’ve recently been in services where I’ve seen people pray back through that had been backslidden for 20 years or more. Yet it was my first time to ever minister in a service they were in. That doesn’t mean I did something right and others did something wrong. I just happened to be the one preaching when they finally gave into God. I’ve no doubt there were endless attempts and hours of talking. There were probably too many tears shed to number – countless hours of prayer invested. All of these things are key factors in the return of a backslider.

The bottom line is this, the choice remains their choice. They are the only ones that can make this decision. Keep praying, believing the Lord, and don’t lose faith.

The above article, “The Power of a Choice” was written by David S. McKemy. The article was excerpted from chapter 10 in McKemy’s book, Reharvested Fields.

The material is copyrighted and should not be reprinted under any other name or author. However, this material may be freely used for personal study or research purposes

1 thought on “The Power of a Choice (Entire Article)”