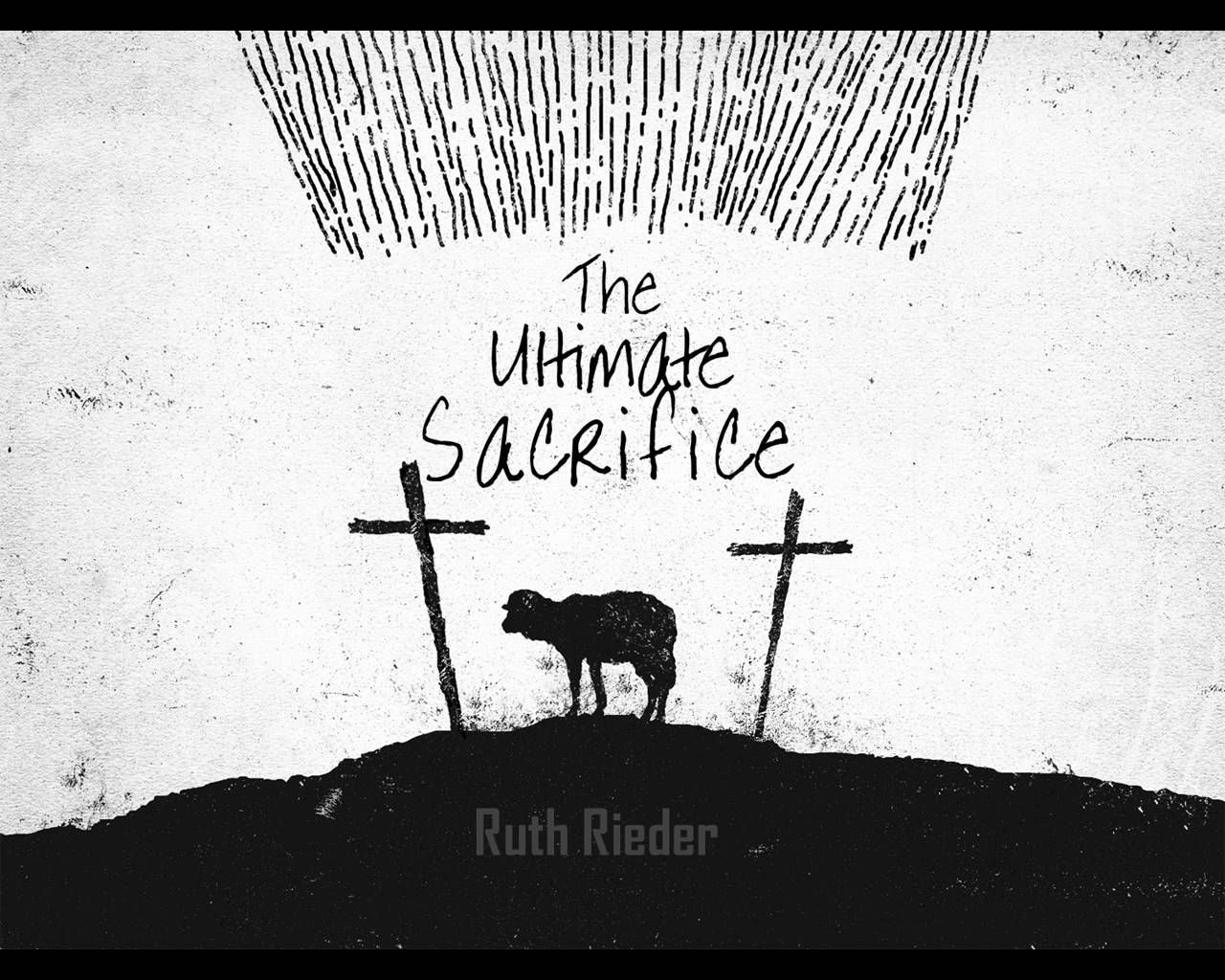 And Abraham planted a grove in Beersheba, and called there on the name of the LORD, the ever-lasting God. And Abraham sojourned in the Philistines’ land many days.”‘ Following the departure of Hagar and Ishmael, life began settling into a peaceful pattern. Abraham planted a grove of trees and tarried in Beersheba many days. The years passed and the anguish of Ishmael’s departure became less acute. As Abraham poured himself into the rearing of Isaac, the bonds of love grew stronger between the father and his remaining son.

As Isaac matured into manhood, Abraham realized anew the many sacrifices God required of him had been well worth it. Secure in the fulfillment of the promise of Isaac, no doubt remained in Abraham’s mind. Everything else God had promised would surely come to pass. Life was good as the elderly patriarch sat by the well within the shady grove and listened to the infectious laughter of the promised child. Surely the testing had come to an end with the climax of Ishmael’s departure.

One by one the Almighty had removed every idol from Abraham’s heart; however, one idol yet remained. God had to know one more thing about the man of faith. “And it came to pass after these things that God did tempt Abraham, and said unto him, Abraham: and he said, Behold, here I am.” Eagerly Abraham waited to hear what God would say, but His next words almost turned Abraham to stone. “And he said, Take now thy son, thine only son Isaac, whom thou lovest, and get thee into the land of Moriah; and offer him there for a burnt offering upon one of the mountains which I will tell thee of.”‘

With stark simplicity the story of Abraham’s final testing unfolds in the Word of God. The Author permits the reader to mentally fill in the blanks of emotional upheaval that surely must have assaulted the devoted father. For the first time in Scripture, God uses the word lovest. This word poignantly illustrates the depth of Abraham’s devotion for his only son. Did he initially feel outrage, fright, rebellion, or hatred toward the Lord? We will never fully know the extent of Abraham’s emotions until each of us is summoned to this place of ultimate sacrifice.

Heaven held its breath as the aged patriarch reasoned within himself. Reaching the place of surrender, Abraham began preparing for the journey. He could not forget God’s unwavering faithfulness to him and once again he answered the summons to the place of sacrifice. “And Abraham rose up early in the morning, and saddled his ass, and took two of his young men with him, and Isaac his son, and clave the wood for the burnt offering, and rose up, and went unto the place of which God had told him.’

After three days they entered the foothills of the land of Moriah. Abraham saw the dreaded hill in the distance. When they arrived at the base of the mountain, Abraham briefly instructed the young servants to wait with the donkey. “And Abraham said unto his young men, Abide ye here with the ass; and I and the lad will go yonder and worship, and come again to you.”‘ What a wondrous expression is the word worship. Even in the midst of the testing, God deserved adoration and worship. It reflects the mood of the patriarch’s mind. He was absorbed with the One who had sent him forth on this sorrowful errand.

With utmost confidence, Abraham told the young men he and the lad would return. “And Abraham took the wood of the burnt offering, and laid it upon Isaac his son; and he took the fire in his hand, and a knife; and they went both of them together.”6 Lifting the bundle of wood and laying it on Isaac’s back, he took the firepot and knife. Together they began the climb to the top of Mount Moriah.

As they climbed, Isaac questioned his father about the apparent absence of a sacrifice. Abraham simply answered, “My son, God will provide himself a lamb for a burnt offering: so they went both of them together.”‘ Still closer they came to the dreaded summit.

“And they came to the place which God had told him of; and Abraham built an altar there, and laid the wood in order, and bound Isaac his son, and laid him on the altar upon the wood.” Upon reaching the mountain peak, Abraham set about building an altar. Isaac looked on as he arranged the wood. Unable to put off the dreaded moment any longer, Abraham told his son what God required of him. Willingly Isaac allowed his father to bind him and lay him on the altar. Resolutely Abraham picked up the knife as he prepared to offer his greatest treasure. He must never forget Isaac did not really belong to him. He was God’s gift to Abraham, a promise entrusted into human keeping.

All the other sacrifices had prepared Abraham for this moment—the supreme test of his faith. Years of molding, shaping, and designing led the patriarch to this ultimate sacrifice. This time God could not help him; it was Abraham’s test, his moment of victory or defeat. Before him was the door upon which human history would swing. This moment of moral choice would inscribe the pages of the future. At this juncture, a man would decide the course of human events, for the Lord had entrusted the power to him.

In absolute surrender to the will of the Almighty, Abraham lifted his arm; the hand that held the dagger prepared for its powerful descent. Isaac tensed and closed his eyes as he waited for the force of the descending knife. On the foreboding crest of Moriah, two dismal, pathetic figures stood under the watchful eye of their God. An unearthly silence enveloped the scene as time stood still.

At that moment a voice thundered from heaven. “ABRAHAM, ABRAHAM.” With his glinting dagger poised in midair, Abraham hoarsely answered, “Here am I.”‘ Then came the most wondrous words the aged patriarch had ever heard: “Lay not thine hand upon the lad, neither do thou anything unto him: FOR NOW I KNOW that thou fearest God, seeing thou hast not withheld thy son, thine only son from me.”

Trembling, the old arm fell lifeless to the father’s side, the knife slipping unnoticed to the ground. A dead man dropped that deathly blade. Someone died there on Mount Moriah, but it was not Isaac. Abraham, the proud father, ambitious for and possessive of his beloved son and heir to all his personal desires, chose instead to become alive to the will of God. Every vestige of idolatry was completely cleansed from his heart.

“And Abraham lifted up his eyes, and looked, and behold behind him a ram caught in a thicket by his horns: and Abraham went and took the ram, and offered him up for a burnt offering in the stead of his son.”” Quickly Abraham removed the bonds from Isaac and together they offered up the ram in sacrifice to God. From the lofty heights of Moriah, Abraham looked across the vale of the centuries and saw the day of Jesus Christ, the perfect sacrifice that was to come. “Your father Abraham rejoiced to see my day: and he saw it, and was glad.”

“And Abraham called the name of that place Jehovah-jireh: as it is said to this day, In the mount

of the LORD it shall be seen. “13 This is a true saying. The provision of the provider will not be obtained until we approach the place of sacrifice. God does not bring deliverance until we reach the point of our greatest need. When our Isaac is on the altar and the knife is about to descend, God’s angel will intervene.

God had often promised, but for the first time He swore by an oath by Himself, the highest authority in the universe. “And the angel of the LORD called unto Abraham out of heaven the second time, and said, By myself have I sworn, saith the LORD, for because thou hast done this thing, and hast not withheld thy son, thine only son: that in blessing I will bless thee, and in multiplying I will multiply thy seed as the stars of the heaven, and as the sand which is upon the sea shore; and thy seed shall possess the gate of his enemies; and in thy seed shall all the nations of the earth be blessed; because thou hast obeyed my voice. ”

As Abraham and Isaac wended their way down the mountain, the patriarch’s face reflected the inner tranquility of one who had sacrificed all unto the faithful God only to find himself richer, having lost nothing. The father of the faithful had passed the test, and the covenant promises could be totally entrusted into his keeping. “And the scripture was fulfilled which saith, Abraham believed God, and it was imputed unto him for righteousness: AND HE WAS CALLED THE FRIEND OF GOD.”‘

1 thought on “The Ultimate Sacrifice”