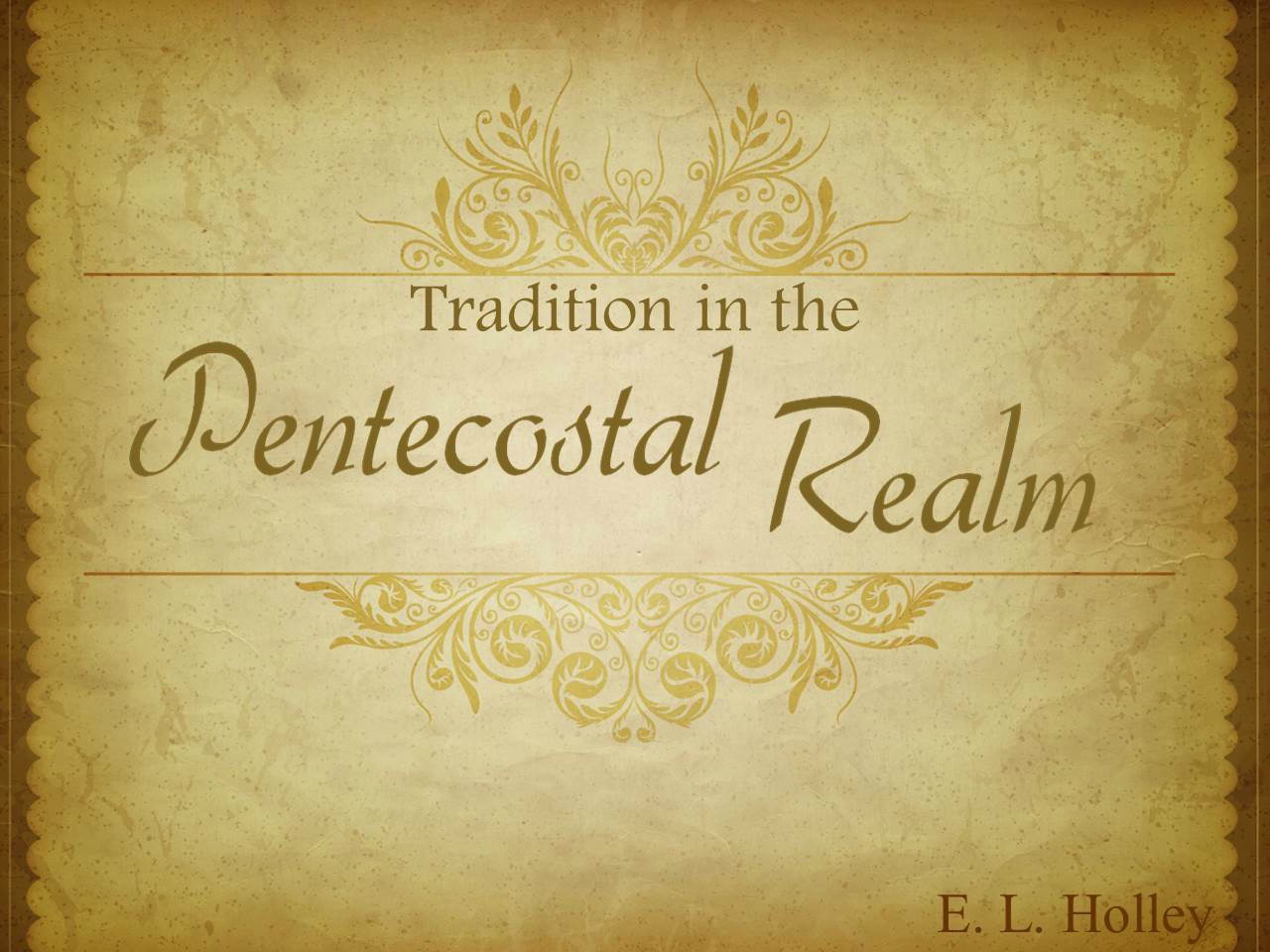 To assume that all tradition is erroneous simply because it is tradition is faulty assumption. The church Jesus built has always embraced tradition and still does today! The apostles exhortation to “stand fast and hold the traditions which ye have been taught whether by word or by our epistle” (II Thessalonians 2:15), leaves little doubt in the matter. It is quite obvious that traditional teaching has always occupied a vital role in the work of the church.

Tradition as it is presented in the Scriptures is a belief, habit, practice, or principle which has been handed down verbally from one generation to another. Having no specific scriptural authority, tradition is transmitted to the following generation, either by precept or example, who generally accept it as proper and authoritative without question. Often the only basis for such wholehearted acceptance is their faith in the word and wisdom of their elders.

Naturally, the results are not all good; neither are they all bad. For instance the doctrine of the trinity is a traditional position for which there is no valid scriptural authority. The lack of specific scriptural authority, however, isn’t the greatest fallacy involved in the teaching. The main fault of doctrine lies in its flagrant contradiction to the Word of God!

However, there are doctrines and practices of the church which are based upon tradition and are very vital. These are beliefs we know to be essentially sound and yet they are teachings which have no specific precise scriptural authority, other than being embedded in clear principle.

For one illustration among many, consider the teaching of the church concerning the modern dance. We teach with vigor that a Christian should never engage in the practice. We point out without fear of successful contradiction that the modern dance incites lust, lowers morals, encourages licentious liberties, and fosters gross immorality. Therefore we rightly conclude that dancing is a lascivious activity, and since Scripture teaches lasciviousness to be a work of the flesh (Galatians 5:19), those who walk in the Spirit must avoid it and have no part in the practice. Furthermore, “They which do such things shall not inherit the kingdom of God” (Galatians 5:21). Our conclusion is rightly dogmatic!

Yet there isn’t one verse of Scripture that specifically states that it is sinful to perform the rumba! Consequently, our teaching on the point is without precise scriptural authority. It is a traditional doctrine. Thus we see the good and bad. Since both teachings are without specific scriptural commandment, what is the big difference between the two?

As we’ve seen, the doctrine of the trinity is a flagrant contradiction to the Word of God and does violence to its holy precepts! The doctrine concerning the dance, however, is within the realm of scriptural teaching and harmonizes with its intents! It does not contradict the commandments of God, but complements them. It interprets Bible teaching in the light of modern-day practices and applies the general doctrine of holiness to a specific practice! In doing this, it remains consistent with the over-all structure of God’s Word. These points show the distinction between the two doctrines—between a good and bad tradition.

Our Lord revealed His attitude toward tradition during his first advent. He did not condemn traditional teachings simply because they were tradition, but when He found His people teaching things contrary to the Word of God He never failed to point it out. In fact, He said, “Howbeit in vain do they worship me, teaching for doctrines the commandments of men.” In elaboration of this indictment. He continued: “For laying aside the commandments of God, ye hold the tradition of men.” As if He wished to emphasize its significance, He drove the point further: “Full well ye reject the commandment of God that ye may keep your own tradition” (Mark 7:79). Magnifying the significance of this incident is the fact that Jesus was talking to His chosen people about His chosen people! Not the heathen or the pagan, but God’s own people! How did this come about?

If there is a simple explanation to this deplorable condition, it is in the origin and evolution of their traditions. In its origin, a tradition is born when there is a problem which does not seem to be covered by the Word of God or when someone has a desire to follow a practice which isn’t authorized in the Scriptures. Needless to say it is at this point that a great possibility of error exists. As we have pointed out, there must of necessity be a stand taken on many things which are not specifically covered by Scripture. Therefore those in the position of responsibility must be highly discriminating in the choice of action to follow. Their decision must harmonize with the intent and pattern of the Bible or it will not be acceptable to God. Evidently God’s chosen people failed in this respect. Traditions which were in opposition to God’s Word were introduced and followed. Once instituted, they began to develop in strength and deviate even further from the holy pattern.

If they appeared to produce good results, widespread acceptance came quickly and they became firmly entrenched in the religious lives of the people. With the passage of time, as they passed from one generation to another, there was little hope of ever changing them.

Why is this? Perhaps several factors are involved, but there are two points that tend to weld a tradition—either good or bad—to a people. One is the natural reluctance on the part of the succeeding generation to reject the teaching or deviate from the pattern set by revered fathers. Even the suggestion of change becomes an insult!

The very idea that the fathers could have been wrong brings angers to a boiling point fast! Moreover, few are willing to take steps of correction even if they can see the need, because to do so would in a sense condemn the practice of their older generation. Therefore people desiring the approval of their elders hesitate to make such attempts. To correct a tradition that has been endorsed, taught, and practiced by the preceding generation brings opposition and scorn, and few if any are willing to pay that price!

Another obstacle exerting even greater influence than the first is found in an element of human nature—our ego! After we have followed a practice for a while we become personally involved and regardless of circumstances we are prone to try to justify ourselves. Only a strong conviction can cause us to admit that we are wrong in a practice! While we might find it easy to tell others what they must do in order to please God, it becomes another thing entirely when we must admit error on our part. The all-important ego is involved! It has been said of some, “They would rather die and go to hell than admit they were wrong!” Quite obviously that is the case in many instances.

At any rate, Jesus Christ made it plain to that generation and all that were to follow that deviation from the divine pattern would not be tolerated. Instead of commending His people for following the traditions of their fathers, He severely reprimanded them! With due consideration to the elders, He made it plain that he expected His people to adhere to His Word regardless of what the elders had done in the past.

A Danger We Face

These events in the first advent of Jesus Christ teach us that neither the passage of time nor the endorsement of elders will justify a tradition which is contrary to God’s Word. Moreover we see that error is still error regardless of who embraces it or how many they are in number. Therefore if we endorse and approve error, our endorsement won’t sanctify it; it will still be error! When Jesus comes again He will be of the same opinion as He was in His first advent. He will have no more tolerance for unscriptural practices than He did then. At that point there will be no chance for correction.

Specifically there is a particular point to consider for the moment. The future of the church as we know it depends in no small way upon a God-called, anointed, and dedicated ministry. My brethren who must make the decisions concerning the ordination of ministers have a heavy load on their shoulders. Occasionally there is pressure exerted in behalf of one who is not qualified for the ministry. This ought not be. In addition to making it difficult for those who must say one way or the other, there is harm done to the ill-advised candidate. Therefore each of us needs to realize that there are scriptural requirements for the ministry! These requirements must be met before he is licensed or ordained. The Lord of Glory does not now, nor has He ever, needed teachers so badly that He ignored the written Word and called one who couldn’t qualify for the ministry.

There is no stigma connected with not being qualified for the ministry. One can be a Christian, a good one, and still not be qualified for the work of the ministry. To illustrate the point, a young lady might apply for a job as a “fireman” with the city fire department. She may make the highest score on her examination, be of age, have a natural knack for putting out small fires, and a strong desire to save people from burning buildings. But all of these fine traits and desires would not qualify her for the job! This is not to her discredit and she shouldn’t feel badly about it. She should seek a job for which she is qualified. Possibly a closely related position, one for which she is qualified, would suffice. At any rate, she shouldn’t feel that the city fire department is discriminating against her. Neither should she feel as though she were stigmatized, disgraced, or reproached. Moreover, the last thing she should do is start chasing fires on her own!

These points are no less true of the work of the ministry! An unqualified ministry will do irreparable harm to the progress of God’s work, but in the final judgment, it will bring the wrath of God to front. Only a qualified, dedicated, Bible-loving ministry under the guidance and leadership of Jesus Christ can accomplish the great task assigned to the church of the living God!

To deviate from the divine pattern will evoke the unanswerable question from the righteous Judge, “Why hast thou done so?” A shrug of our shoulders and the weak explanation, “We inherited it” will not justify an unscriptural practice! When we can find no better justification for a habit, practice or belief than to say, “We inherited it,” it is high time to abandon it.

Deviations from the divine standard by any man or group of men will not alter the inerrant, infallible, unchanging, eternal Word of God. Therefore, it becomes increasingly important that we do all things—our habits, practices, and beliefs—in accordance with the Word. To this end we must press, looking for the glorious appearing of the great God and our Savior, Jesus Christ.

This article “Tradition in the Pentecostal Realm” by E. L. Holley was excerpted from: The Best of E. L. Holley compiled by J. R. Ensey. Advance Ministries 1997. It may be used for study & research purposes only.

1 thought on “Tradition in the Pentecostal Realm (Entire Article)”