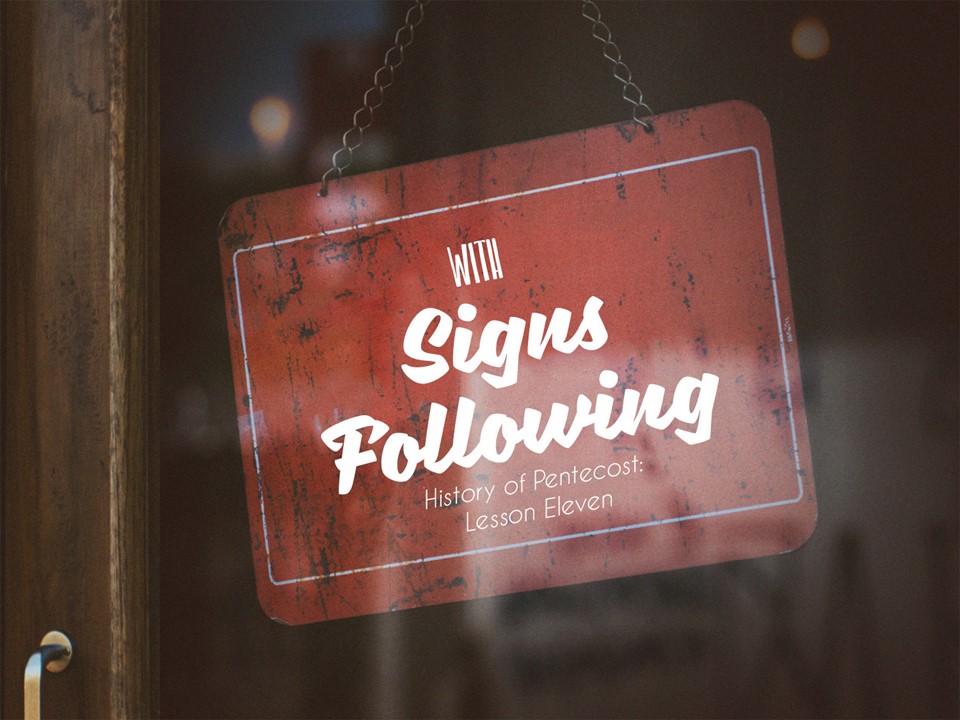 A. WITH SIGNS FOLLOWING:
Scriptural Reference:
“And these signs shall follow them that believe. In my name shall they cast out devils; they shall speak with new tongues…And they went forth, and preached everywhere, the Lord working with them, and confirming the word with signs following. Amen.” (Mark 16:17-20).

When Jesus gave the commission to His disciples of going into the entire world, and preaching the gospel to every creature, He plainly stated that there would be certain signs that would follow the preaching. Here in this Scripture He mentions five of these signs:

1. They shall cast out devils;
2. They shall speak with new tongues;
3. They shall take up serpents;
4. If they drink any deadly thing, it shall not hurt them;
5. They shall lay hands on the sick, and they shall recover.

After His ascension the disciples preached everywhere just as they were instructed to do and the Lord fulfilled His promise by working with them, confirming the word with signs following. There is a vast difference between following signs or having signs follow. Powerless church members like the Jews in Christ’s day seek after signs to follow. However, the true church will not be following signs but rather will have signs following.

Have there been signs following the twentieth century Pentecostal Revival? The answer to this question will largely determine whether or not this Pentecostal revival has been ordained of God. Thank God, we need not even hesitate in answering this question with a positive affirmative.

For eighty-six years signs and wonders have been following the preaching of the Word of God. The Pentecostal Revival has restored miracles and the power of God to the church. Because of this Pentecostal Revival the Gifts of the Spirit have become a vital part of the true church. Because of this the church has been rejuvenated, altars have been filled, sinners have been converted and the sick have been healed. Because of these signs, wonders and miracles, the Name of Jesus has been glorified and it has become evident to all that this mighty Latter Rain Outpouring has truly been sent from God.

B. THE SIGN OF SPEAKING IN TONGUES:
The distinguishing sign following this twentieth century revival, is, of course, speaking in tongues. Pentecostal saints who hear people speaking in tongues may become familiar with this phenomenon and forget that it is a miraculous sign that follows them who believe. Speaking in tongues is a supernatural sign and is a miracle within itself.

Next to that of speaking with tongues the sign that has been most prominent is that of healing. This twentieth century Pentecostal revival has continually been accompanied by miraculous healings. Every disease known to man has been healed in answer to prayer. Blind eyes have been opened, deaf ears unstopped, goiters disappeared, cancers vanished, and demons cast out in the name of Jesus.

This has been true from the very beginning of this revival. In 1903 when the Holy Spirit was outpoured at Galena, Kansas, it was partly due to the miraculous healing of Mrs. Mary Arthur, who had been sick for years. She had been sick for fourteen years with dyspepsia, hemorrhoids, paralysis of the bowels, and was nearly blind. When she was prayed for and anointed with oil on August 17, 1903, she was perfectly healed. A great Pentecostal revival in Galena was the result. What happened here near the beginning of the century has been repeated literally thousands of times around the world.

It has been recorded upon a few occasions that the dead was raised to life in the name of Jesus. Certainly this Pentecostal revival has not lacked for things certifying the fact that the revival was truly sent by God.

D. THE GIFTS OF THE SPIRIT:
One of the great signs following this revival has been the restoration to the church of the nine gifts of the Spirit. Without the baptism of the Holy Ghost this would have been absolutely impossible. With the Outpouring of the Latter Rain came the manifestation and operation of the gifts of the Spirit. This, of course, could be expected but it was another sign that followed the Pentecostal revival.

Since we have studied elsewhere in the Alpha Bible Course about the Gifts of the Spirit, we shall not discuss them here. It is sufficient to know that with the operation of these gifts have come all types of miracles.

Also with the operation of these gifts has come the discerning of Spirits. Spirit-filled Christians have been able to detect the working of Satan in bringing in wrong doctrine or a counterfeit experience. Demon powers have been discerned and cast out as a direct result of and a true sign of the baptism of the Holy Spirit.

D. HOLINESS:
In the writer’s opinion this is the greatest of all signs. Speaking in tongues and miracles would be useless if sinners were not delivered and their lives were not completely changed. The fact that sinners bound with all kinds of habits, drunkards, harlots, and dope addicts, have been saved and delivered, is possibly the greatest of all signs following this revival. The experience of salvation is the greatest miracle of all and full proof that the words of Mark 16:20 have been fulfilled: “The Lord working with them, and confirming the word with signs following.”

C. Why is HOLINESS one of the essential signs following the Pentecostal Revival?