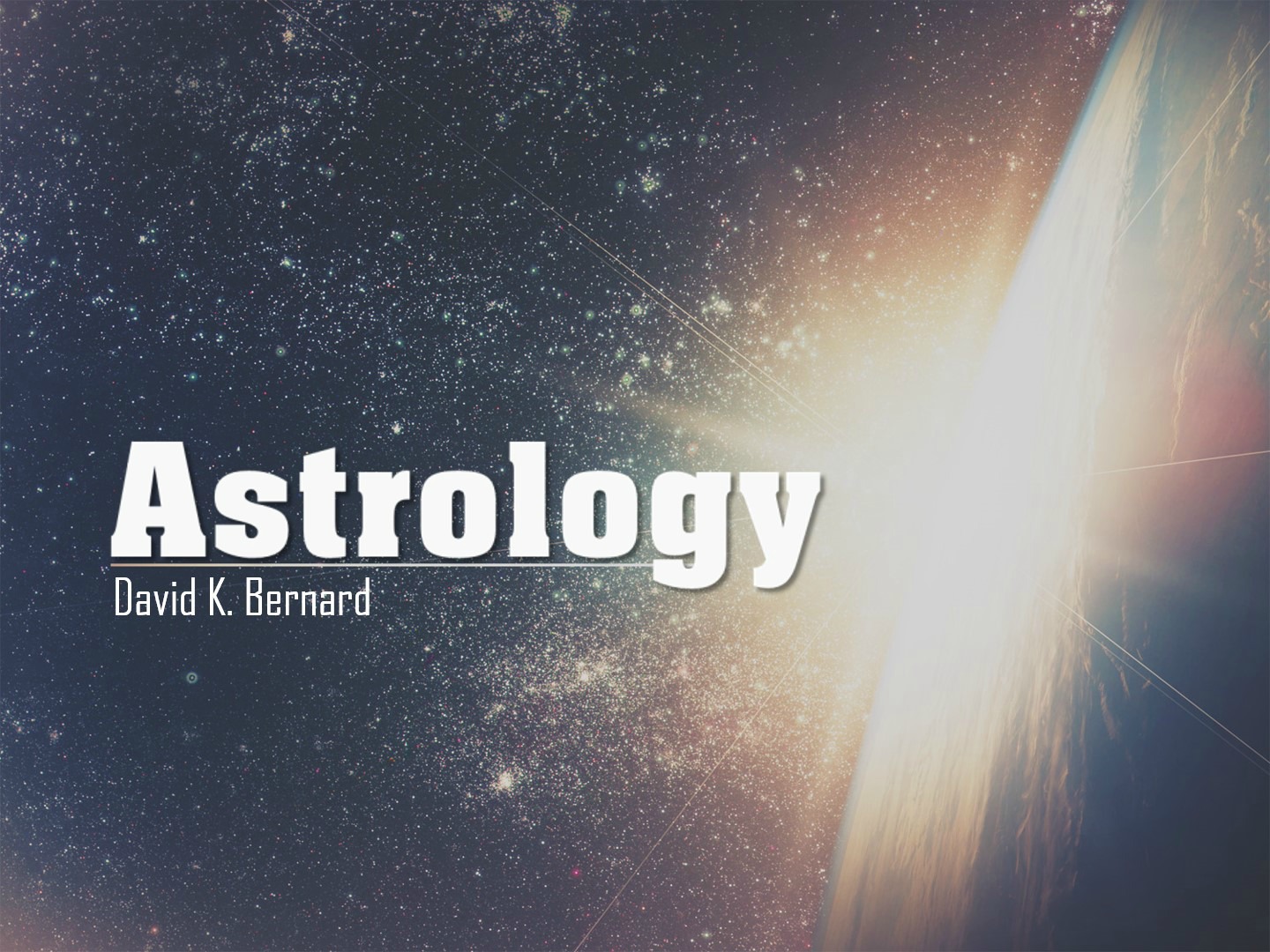 Astrology is “divination that treats of the supposed influences of the stars upon human affairs and of foretelling terrestrial events by their positions and aspects.”‘ Divination is “the art or practice that seeks to foretell or foresee future events or discover hidden knowledge usu. by means of augury or by. . .supernatural powers.” Sorcery is “the use of power gained from the assistance or control of evil spirits esp. for divining,” while witchcraft is in act or instance of employing sorcery?’

The Bible opposes all forms of witchcraft, sorcery, and magic, which by definition include fortunetelling and divination. (By magic we mean heathen and demonic practices, not sleight of hand, optical illusions, or other tricks presented merely for entertainment.) This scriptural prohibition includes astrology, since astrology is a type of divination.

Witchcraft is a work of the flesh that leads to damnation (Galatians 5:19-21). All sorcerers shall have their part in the lake of fire (Revelation 21:8). Paul cast out an evil spirit of divination that possessed a woman in Philippi, and the preaching of the gospel inspired the burning of many occult books in Ephesus (Acts 16:16-18; 19:18-20).

Deuteronomy 18:9-12 says, “When you enter the land the LORD your God is giving you, do not learn to imitate the detestable ways of the nations there. Let no one be found among you who sacrifices his son or daughter in the fire, who practices divination or sorcery, interprets omens, engages in witchcraft, or cast spells, or who is a medium or spiritist or who consults the dead. Anyone who does these things is detestable to the LORD, and because of these detestable practices the LORD your God will drive out those nations before you” (NIV).

In Jeremiah 10 the LORD told His people not to learn the ways of heathen nations. Specifically, He instructed Israel not to pay any attention to astrological signs in the sky or to worship idols.

In Isaiah 47, God condemned all forms of witchcraft, explicitly including astrological prediction. This chapter describes the fall of Babylon, a city noted for its astrologers, magicians, and soothsayers. “You have trusted in your wickedness and have said, ‘No one sees me.’ Your wisdom and knowledge mislead you when you say to yourself, ‘I am, and there is none besides me.’ Disaster will come upon you, and you will not know how to conjure I away. A calamity will fall upon you that you cannot ward off with a ransom; a catastrophe you cannot foresee will suddenly come upon you. Keep on, then, with your magic spells and with your many sorceries, which you have labored at since childhood. Perhaps you will succeed, perhaps you will cause terror. All the counsel you have received has only worn you out! Let your astrologers come forward, those stargazers who make predictions month by month, let them save you from what is coming upon you. Surely they are like stubble; the fire will burn them up. They cannot even save themselves from the power of the flame. Here are no coals to warm anyone; here is no fire to sit by. That is all they can do for you—these you have labored with and trafficked with since childhood. Each of them goes on in his error; there is not one that can save you” (Isaiah 47:10-15, NIV).

The Book of Daniel also shows the bankruptcy of these Babylonian occult practices. The astrologers, magicians, and soothsayers could not understand or reveal God’s truth to the Babylonian king (Daniel 2:27; 5:15).

Astrology is based on a false understanding of the universe from the perspective of true science, as the following points demonstrate.

*The earth wobbles unevenly as it spins on its axis. Therefore, in our day the sun appears to enter each constellation one month earlier than it did when the astrological charts were invented centuries ago. Even if astrology were valid, one’s horoscope would be one month earlier than astrologers say. Yet people claim to see great truth in the horoscopes assigned to them.

*Thousands of stars have been discovered since astrology was invented, yet astrology does not consider their possible influences.

*For many weeks of the year no constellations appear north of the Arctic Circle. Do Scandinavians, Eskimos, and Siberians born under these circumstance not have a horoscope?

*The primary force by which one body in space acts upon another is gravity. Yet the sun and moon’s gravitational pull on the earth each outweighs by far that of. all stars and planets combined.

* Astrology does not know that the earth is a sphere instead of a flat surface. Two persons may be born at the same time but in opposite hemispheres under totally different astronomical conditions.

In view of astrology’s faulty scientific basis, how can some find great predictive value in it? Most are gullible and deceived. Astrology’s descriptions are so general that someone who wants to believe in them can usually find a resemblance to real life. Moreover, astrology can be a self-fulfilling prophecy. If someone believes his horoscope he will act accordingly. His attitude towards himself and the world around him will significantly influence his actions and others’ reactions to him.

When astrologers have predicted specific events, they have often been wrong. Even the most famous diviners of today have made many documented predictions that failed to come to pass. In general, their predictions are no more accurate than any educated guesswork. According to the Bible, if a prophecy fails to come to pass, then the prophet is false (Deuteronomy 18:20-22). We must also recognize that some astrologers and fortunetellers operate with satanic powers (Acts 16:16-19).

There is No “Godly” Astrology

God made the sun, moon, and stars as lights, as rulers over night and day, and for signs, seasons, days, and years (Genesis 1:14-18). They are rulers over night and day because they bring light into an otherwise dark world. They are for signs because they serve as navigational aids and location finders. They are for seasons, days, and years because they determine and display the progression of days, months, seasons of the year, and years. There is no astrological significance to these functions.

Psalm 19:1 states, “The heavens declare the glory of God; and the firmament sheweth his handywork.” This psalm speaks of God’s creative power as displayed in nature. Through the testimony of creation itself we can know that God exists and we can learn much about His character and power. “For since the creation of the world His invisible attributes are clearly seen, being understood by the things that are made, even His eternal power and Godhead” (Romans 1:20, NKJI). Psalm 19:1 and Romans 1:20 express the same basic truth, and it would be a distortion of the Bible message to say the former verse supports astrology.

Deborah’s song of victory stated that the stars in heaven fought against the enemy general Sisera (Judges 5:20). We believe this is an example of a poetic figure of speech. If Deborah believed it literally, then the Bible records it as her belief but not as God’s truth. Some think this passage actually refers to angelic warfare.

The Star of Bethlehem did not involve the use of magical astrology. The wise men from the East were probably acquainted with astrology, but the Star of Bethlehem stood out as distinct from any system of astrology known to man. If they were observing the heavens for astrological reasons, they immediately recognized that this star was an exceptional one and followed it precisely because it did not fit into any pagan system. God did not use an astrological sign, but used an unusual astronomical event to attract their attention, just as He has used other forces in nature such as earthquakes, wind, and fire. Just as His use of fire at Mount Sinai does not endorse fire worship, so His use of the star does not endorse astrology.

It is dangerous to use astrology in an attempt to further the claims of Christianity or to predict the future. We must base all doctrine and prophecy solely on the written Word of God. Use of the false claims of astrology can only serve to discredit Christianity.

For example, a few years ago some borrowed the astrological belief that we would enter into a new age when all the planets were in alignment. They predicted all sorts of tumultuous events based on the gravitational pull of the aligned planets, but true scientists accurately predicted Flat no such events would occur simply because the combined pull of all the planets is insignificant compared to that of the sun and moon on the earth. Of course, the time for this event has come and gone, and “Christian astrology has failed once again.

In some cases, Christians have actually used astrology o assist them in understanding personalities and in counselling. All such efforts are futile, because both science .111(1 Scripture testify that there is no truth to astrology. Furthermore, by using a satanic tool such as astrology, these people have actually allowed themselves to come under Satan’s influence. We can cite examples of Chris-tians who have been led into the occult and who have transformed themselves into cultists because of their superstitious interest in and involvement with astrology.

The ante-Nicene fathers were strong in their denunciation of astrology and all other forms of magic. The Didache says, “My child, be not an observer of omens, since it leadeth the way to idolatry, neither an enchanter, nor an astrologer.”

Hippolytus devoted Book IV of his work The Refutation of All Heresies to disproving the false claims of astrology. He called it an “art of divination” and an “impotent. . .system.” He said that according to apostolic tradition no magician, enchanter, astrologer, diviner, or soothsayer could maintain his occupation and be a Christian.

Lactantius said that astrology, soothsaying, divination, necromancy, and magic were all inventions of devils.

The Constitutions of the Holy Apostles admonished Christians to avoid all heathen “enchantments, observations of omens, soothsayings, purgations, divinations, observations of birds; their necromancies and invocations.”‘ Furthermore, no Christian could be “a magician, an enchanter, an astrologer, a diviner, an user of magic verses, a juggler, a mountebank, one that makes amulets, a charmer, a soothsayer, a fortune-teller, an observer of palmistry.”

In conclusion, the Bible teaches that we should avoid all witchcraft and divination, including all forms of astrology. We must not attempt to find God’s truth by using a heathen practice. If we want to know God’s truth, let us go to His Word! If we seek insight to help plan our lives or to counsel others, let us ask wisdom of God, who will give liberally to all who ask in faith (James 1:5-6). If we are curious about the future, let us place our faith in God and the Word of God.

The above article “Astrology” is written by David K. Bernard. This article was excerpted from chapter thirteen in Bernard’s book Practical Holiness.