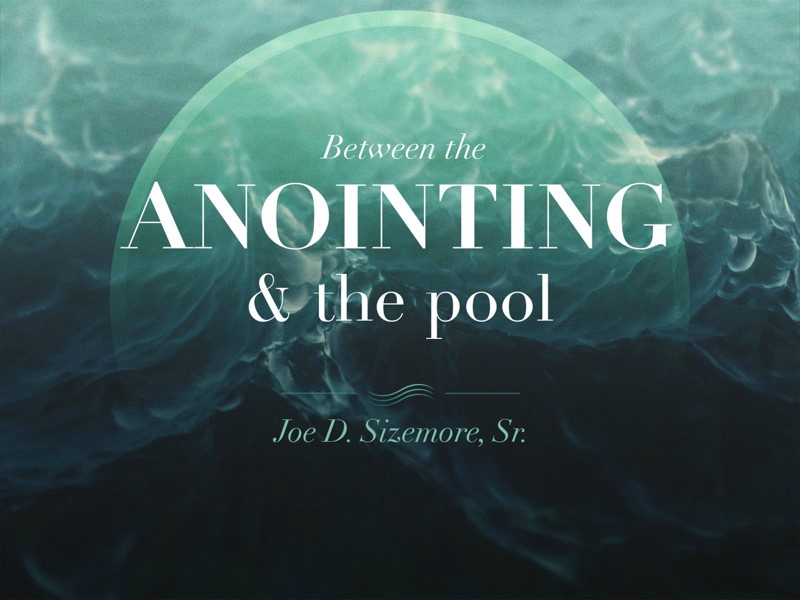 Friend, tonight the fountainhead is the Lord Jesus and from Him goes the streams of living water. From Him goes grace. You be sure you are going to the right place now. And you will see the Son of God in action. You will see Him coming right down in all His power . . . the Holy Ghost coming right down while the preacher is preaching. You may not be accustomed to it, but you better get used to it.

And as Jesus passed by, he saw a man which was blind from his birth. And his disciples asked him, saying, Master, who did sin, this man, or his parents, that he was born blind? Jesus answered, Neither hath this man sinned, nor his parents: but that the works of God should be made manifest in him. I must work the works of him that sent me, while it is day: the night cometh, when no man can work. As long as I am in the world, I am the light of the world. When he had thus spoken, he spat on the ground, and made clay of the spittle, and he anointed the eyes of the blind man with the clay, And said unto him, Go, wash in the pool of Siloam (which is by interpretation, Sent.) He went his way therefore, and washed, and came seeing.

Having made clay of the spittle, the eves of the blind man were there then anointed, or He (Jesus) took up that clay and placed it on the blind man’s eyes. It’s a strange thing that Jesus did here. Number one, the subject on which He did it: a blind man, a young man who had sat blind for all the years of his life, however long that might have been. And the entire chapter is given over to the phenomenal events that took place in this young man’s life. Because having the temple here, Jesus was ministering, and he had been talking about all the blessings of God. It is probable that after He was in the temple that He went to the Mount of Olives and that’s when He encountered the blind man. This was a physical and literal blindness. Jesus saw him sitting in this place, and the question arose, “Who did sin? Was it his parents?” You see, the Jews always looked at handicaps and physical disabilities as a part of sinning or transmigration, which simply means that some physical weakness is passed down from one generation to the next.

I suppose I would be able to cope with about any kind of physical ailment, except blindness. That was a terrible problem that the man had, because since being blind from birth, he had never seen a sunrise or a sunset. He had never seen the many shades of blue across the waters or the whitecaps of the waves. He had never seen anything, and there he was in his blindness since birth.

But Jesus answered them, “Neither hath this man sinned nor his parents, but what is happening here is the course of divine providence because this situation is here so that the glory of God can be revealed, and we can understand better the mystery of providence.” God would receive the glory. I don’t fully understand that, but He did! So then Jesus took mud and anointed his eves. Now the question that comes to me is “Why not just heal the man with one touch? Why send him from where he was anointed all the way to the pool?”

Don’t you know that Jesus has enough power to come to your rescue instantly? Don’t you understand that Jesus knows what you need even before you ask Him? But many of us, including myself, are on our way from the anointing to the pool. I’m not blind physically. Some things I cannot understand, and some things I can’t see, but God is on His way to my rescue. Now I don’t understand when He mixed that mud with spit and put that on the blind man’s eyes, just smeared it on there real good. Well it couldn’t hurt none because he couldn’t see anyway, but the blind man did have to go from an accustomed place to a place he was not accustomed to.