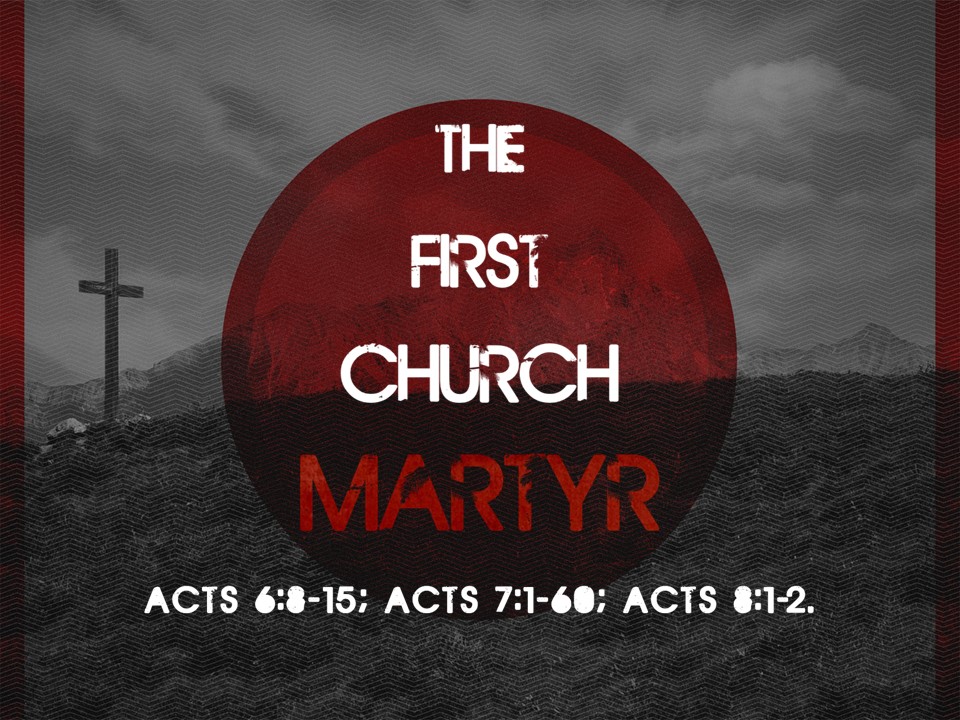 A. Stephen, The First Church Martyr:
• Stephen was a Grecian Jew and one of the first seven deacons.
• He is described as being full of faith and power (Acts 6:8). He preached under such anointing that none could resist the wisdom and the spirit by which he spoke. Great wonders and miracles followed his ministry.
• His name means, “crown.” His name certainly was appropriate for he was the first to wear the martyr’s crown.

B. The Synagogues in Jerusalem:
• The Hellenistic Jews who had returned to Jerusalem to live had established at least five synagogues in Jerusalem.
• The Jews who assembled in this synagogue were Jews who had been taken prisoners by Roman generals, reduced to slavery, and then later emancipated and returned to their homeland.
• Since Stephen was a Grecian it was natural for him to go to the Grecians with the gospel message. Although these Jews had traveled widely and were possibly educated, they were unable to answer Stephen for Stephen preached with such wisdom and power.
• This made them very angry and they determined to get rid of this Holy Ghost preacher. Therefore they suborned men (hired men to give false witness) who accused him of speaking blasphemous words against God and against Moses (Acts 6:11).

C. The Sanhedrin:
Stephen was taken before the council (Acts 6:12), which is the Sanhedrin. This was the supreme council of the Jewish people. It had its origin with the seventy elders Moses appointed to have help him govern Israel. At this particular time it was to have seventy-one members – seventy plus the president.

The charge also accused him of being a blasphemer.

E. The Sermon Of Stephen:
• Stephen’s sermon is the longest sermon recorded in the book of Acts.
• He begins the sermon with a simple salutation and he immediately begins an accusation of the Jewish leaders themselves. He becomes their judge passing sentence upon them.
• Stephen in his sermon dwells in detail upon the past history of Israel. He proves that they ever rejected God’s grace while failing to obey God’s law.
• Stephen charges the Sanhedrin with high treason against God.

F. The Stoning Of Stephen:
• As the members of the council listened to Stephen they were convicted deeply.
• They grew so angry that they rushed upon him, cast him out of the city and stoned him.
• The Sanhedrin had no power to sentence anyone to death but they ignored this because of their anger and hatred.
• Among the council was Saul of Tarsus. He consented to Stephen’s death (Acts 8:1). By this statement we know that he approved of and was pleased with Stephen’s death..

G. Stephen’s Vision:
• Stephen called upon God, saying, “Lord Jesus, receive my spirit.” Therefore, when Stephen saw God, he knew that He was Jesus Christ.
• The expression “on the right hand of God” simply means the place of power and glory. There are many passages of Scripture, which bring this out clearly. “And Jesus said, I am: and ye shall see the Son of man sitting on the right hand of power.” (Mark 14:62).
• In many of the Scriptures where it describes Jesus as being in the place of power and glory, it describes him as sitting. However, in Acts 7:56 Stephen saw him standing. Could it be that Jesus arose to welcome the first martyr?

H. Similarity Between Calvary And The Death Of Stephen:
Let us consider briefly some similarity between the martyrdom of Stephen and the death of our Lord.
1. In both cases the people were stirred up.
2. Stephen was cast out of the city; Jesus was led out to be crucified.
3. Both prayed for their murderers.
4. Both committed themselves to God.
5. Both cried with a loud voice. In both cases this was a cry of victory.

I. Two Final Truths:
Finally, there are two things that the student’s attention should be drawn to:
1. The manner of Stephen’s death: “fell asleep” (verse 60) speaks of a quiet peaceful death.
2. The effect of Stephen’s death upon Saul: Saul of Tarsus was never the same man after this scene. Although he did his best to drown out conviction by leading a persecution against the church, we are confident that he remembered this scene for his entire life and many times later became a great source of strength and courage to him.

A. Explain clearly the meaning of the following terms:
1. THE SYNAGOGUE OF THE LIBERTINES:

C. How does the vision of Stephen prove the Oneness of the Godhead?

D. What part did Saul of Tarsus have in Stephen’s death?

E. What effect did Stephen’s death have upon Saul?