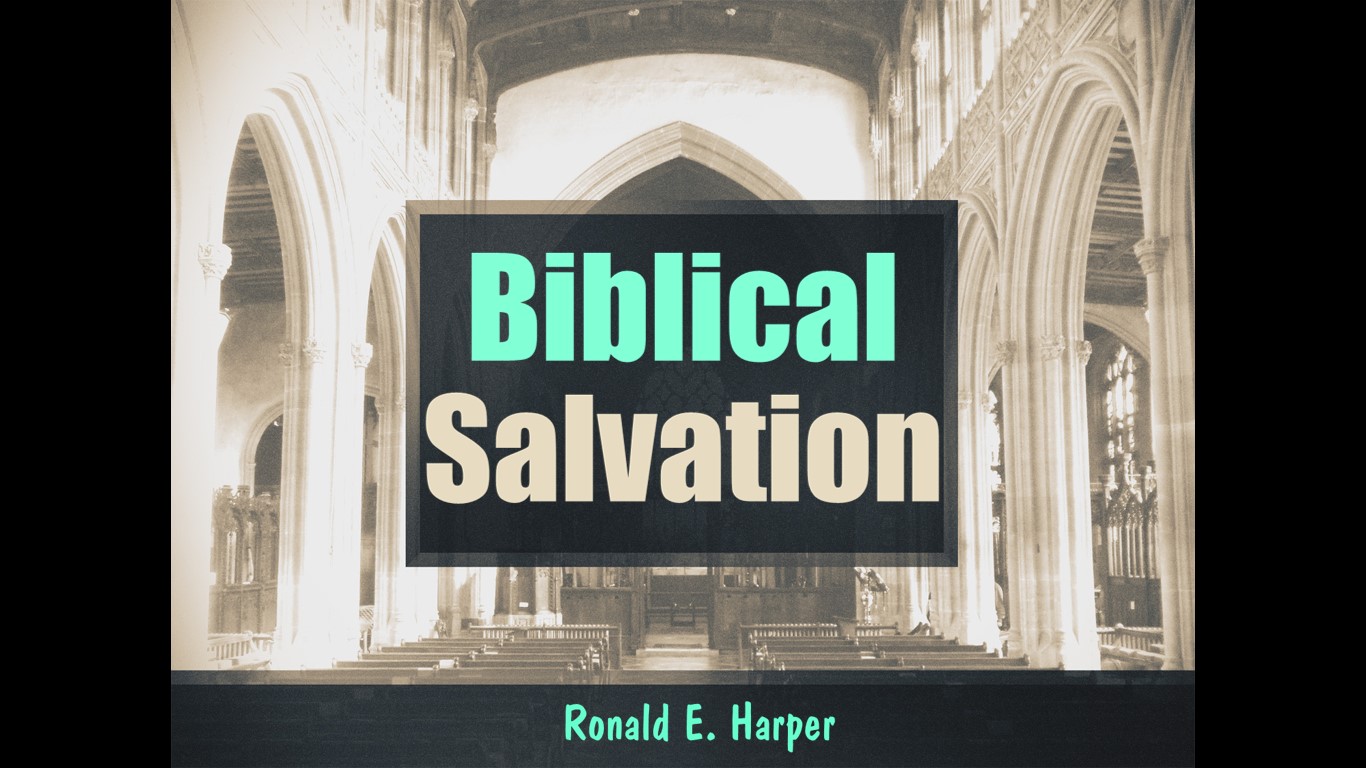 So, now we know how we are not saved; how are we saved? Let us look to the scriptures to see what they have to say, and take note of a few things that will help us see things more clearly and to help keep the scriptures in context. First, no person was ever saved in the gospels of Matthew, Mark, Luke, or John. I know what some of you may be thinking. But, the Lord did not save Peter on the sea in Matthew 14:30-31. “But when he saw the wind boisterous, he was afraid; and beginning to sink, he cried, saying, Lord, save me. And immediately Jesus stretched forth his hand, and caught him, and said unto him, 0 thou of little faith, wherefore didst thou doubt?” The answer is obvious. Jesus did answer Peter’s prayer. Peter did not want to drown. He was asking for physical salvation, not spiritual salvation. What about the thief on the cross? Jesus did not say that he would go to heaven. He said he would go to paradise, also called Abraham’s bosom in Luke 16:22. This was a holding place for the souls of the saints of the Old Testament until the Lord came to pay the sin debt on Calvary.

In John 7:38-39, Jesus said, “He that believeth on me, as the scripture hath said, out of his belly shall flow rivers of living water. (But this spake he of the Spirit, which they that believe on him should receive: for the Holy Ghost was not yet given; because that Jesus was not yet glorified.)” Every major religion will agree that salvation does not occur until spirit of God dwells within the heart of the believer. These verses here show us that the Holy Spirit was not given until Jesus was glorified. When did that occur? When He was crucified? When He was buried?

When He arose from the dead? No. Jesus was not glorified until He ascended back to His heavenly throne. His glory came when he discarded the robe of flesh when He returned to glory. The initial outpouring of the Holy Ghost could not occur until Jesus ascended. He taught the disciples this in John 16:7. “Nevertheless I tell you the truth; It is expedient for you that I go away: for if I go not away, the Comforter will not come unto you; but if I depart, I will send him unto you.”

Secondly, no one was ever saved in the epistles. The epistles were simply letters from the apostles to Christians or churches. They were written to teach doctrine to the saints, to reprove sins, to exhort, and to clarify matters concerning practices of the New Testament church. No one was ever told how to be saved nor was there anyone ever baptized in the epistles. Only in the book of Acts are these things found. The book of Acts is properly called “The Acts Of The Apostles.” This book contains the history of the early church from the beginning of the church age. Then, it shows how it began to spread throughout the known world.

Before we can get into the book of Acts, we need a little bit of a history lesson so that we can keep everything in the proper perspective. During His ministry on earth, Jesus walked with the disciples. He taught them daily. They watched Him perform many miracles. The dead were raised, the lame walked, and blinded eyes were opened. They heard His parables. A lot of times, He would explain the parables to them after the crowds had left. In Matthew 13:11, “He answered and said unto them, because it is given unto you to know the mysteries of the kingdom of heaven, but to them it is not given.” Another example can be found in Matthew 13:36. They stayed with Him for three and a half years. In John chapters 14 through 16, Jesus told them of many truths pertaining to what was to happen to Him and began to tell them of the baptism of the Holy Ghost. He told them that He was the way to heaven in John 14:6. “Jesus saith unto him (Thomas), I am the way, the truth, and the life: no man cometh unto the Father, but by me.” In verse 18, Jesus said, “I will not leave you comfortless: I will come to you.

“Jesus began to promise the disciples that the Holy Ghost would come after He left them. Then He told them why the Holy Ghost was essential. Note verse 26 of John chapter 14. “But the Comforter, which is the Holy Ghost, whom the Father will send in my name, he shall teach you all things, and bring all things to your remembrance, whatsoever I have said unto you.” This was one of the reasons to have the Holy Ghost. The Spirit of God would help the disciples remember what Jesus had taught them while He was here. Jesus went on to give them another reason to have the Holy Spirit. John 16:13 says, “Howbeit when he, the Spirit of truth, is come, he will guide you into all truth.” Looking at what we have learned so far, Jesus had taught the disciples for three and a half years. Then, just before His crucifixion, He began to teach them about the gift of the Holy Ghost. Even John the Baptist had prophesied the coming of the Spirit of God in Matthew 3:11. “I indeed baptize you with water unto repentance: but he that cometh after me is mightier than I, whose shoes am not worthy to bear: he shall baptize you with the Holy Ghost, and with fire:” He told them what the purpose of the Holy Spirit was to be. Then Jesus told the disciples, in John 16:25, “These things have I spoken unto you in proverbs: but the time cometh, when I shall no more speak unto you in proverbs, but I shall shew you plainly of the Father.” Then Jesus was crucified.

We find something very interesting, in Acts 1:3. “To whom (the disciples) also he shewed himself alive after his passion by many infallible proofs, being seen of them forty days, and speaking of the things pertaining to the kingdom of God:” You may remember, from the chapter on the great commission, that last part of Luke 24 and first part of Acts I ran concurrently. It is sort of like a show that was continued. In the second part, the producers will show scenes from the last episode. So, with this understanding, it is seen that, during these forty days, Jesus opened the understanding of the disciples according to Luke 24:45.

This was the fulfillment of John 16:25. Some of the things that he taught them during the forty days between His crucifixion and His ascension are found in the following passages: Matthew 28:18-20, Mark 16:15-18, Luke 24:44 49, and Acts 1:4-8. These are not the only things that Jesus taught them, but just a few things that the disciples recorded. The next point to this study is that between the day of Passover and the feast of Pentecost is fifty days. If Jesus was crucified during the feast of Passover, and was buried for three days, then He spent forty days with the disciples. This will leave approximately 7 seven days, give or take a day or two. What did the disciples do during this time? Luke 24:52-53, “And they worshipped him, and returned to Jerusalem with great joy: And were continually in the temple, praising and blessing God.” Mark 16:20 says they went out preaching “with signs following.” But, we know from the context of the rest of the Bible that could not have occurred until after the gift of the Spirit on the day of Pentecost. Acts 1:13 lets us know that the disciples went into an upper room, where they took care of “business.” They elected Matthias to take the place of Judas. Note the words of Peter during this session. He began quoting scriptures from the book of Psalms in verses 16 and 20. (Remember, Jesus taught them the scriptures with an open understanding in Luke 24.)

They also spent a lot of time praying. After the outpouring of the Holy Spirit on the day of Pentecost, Peter preached his first sermon. He started quoting scriptures from Joel and the Psalms. He told the people that had gathered that they had killed Jesus, the Lord and the Christ in Acts 2:36. Let us pick up the lesson in Acts 2:37. “Now when they heard this, they were pricked in their heart, and said unto Peter and to the rest of the apostles, Men and brethren, what shall we do?” Look at the word “pricked.” According to Strong’s Exhaustive Concordance of the Bible, this was the only time it was used in the New Testament. The Greek word was chophshuwth (pronounced kof-sheeth). It was used to mean “prostration by sickness.” This implies more than just feeling a little guilty. The people didn’t just think about the words of Peter. Note that their hearts were pricked. Their hearts were humbled (prostrated). They were sickened by the truth of what they had done. They knew they had to have something to make this sickness well again. Then, Peter gave them the cure. Acts 2:38 gives us Peter’s response to the question. “Then Peter said unto them, Repent, and be baptized every one of you in the name of Jesus Christ for the remission of sins, and ye shall receive the gift of the Holy Ghost.” But, was this the true plan of salvation being given at the end of this sermon?

But, you must remember, this sermon was the culmination of walking with Jesus for three and a half years, an intense 40-day Bible course and a week (give or take a day) of prayer. Then, the Holy Spirit came. This gift was supposed to remind the disciples what Jesus had taught them (John 14:26) and lead them and guide them into all truth (John 16:13). With this type of background, do you think that Peter could make a mistake? I don’t think so.

Maybe this could be true, if he was acting under his own understanding or authority. But he was filled with the Spirit of Christ.

In the next few chapters, I will go into each part of the plan of salvation in great detail. But, this was it in a nutshell. True biblical salvation is found in Acts 2:38, nowhere else. Repent. Be baptized in the name of Jesus for the remission of your sins. Receive the Holy Ghost. But, you may ask, is it for us today? Acts 2:39 says, “For the promise is unto you: and to your children, and to all that afar off, even as many as the Lord our God shall call.” If you believe that God is still in the business of dealing with mankind, then it is for today. If you feel the call of God, this promise is for you.

The above article “Biblical Salvation” is written by Ronald E. Harper This article was excerpted from Harper’s book The Quest For True Apostolic Doctrine.