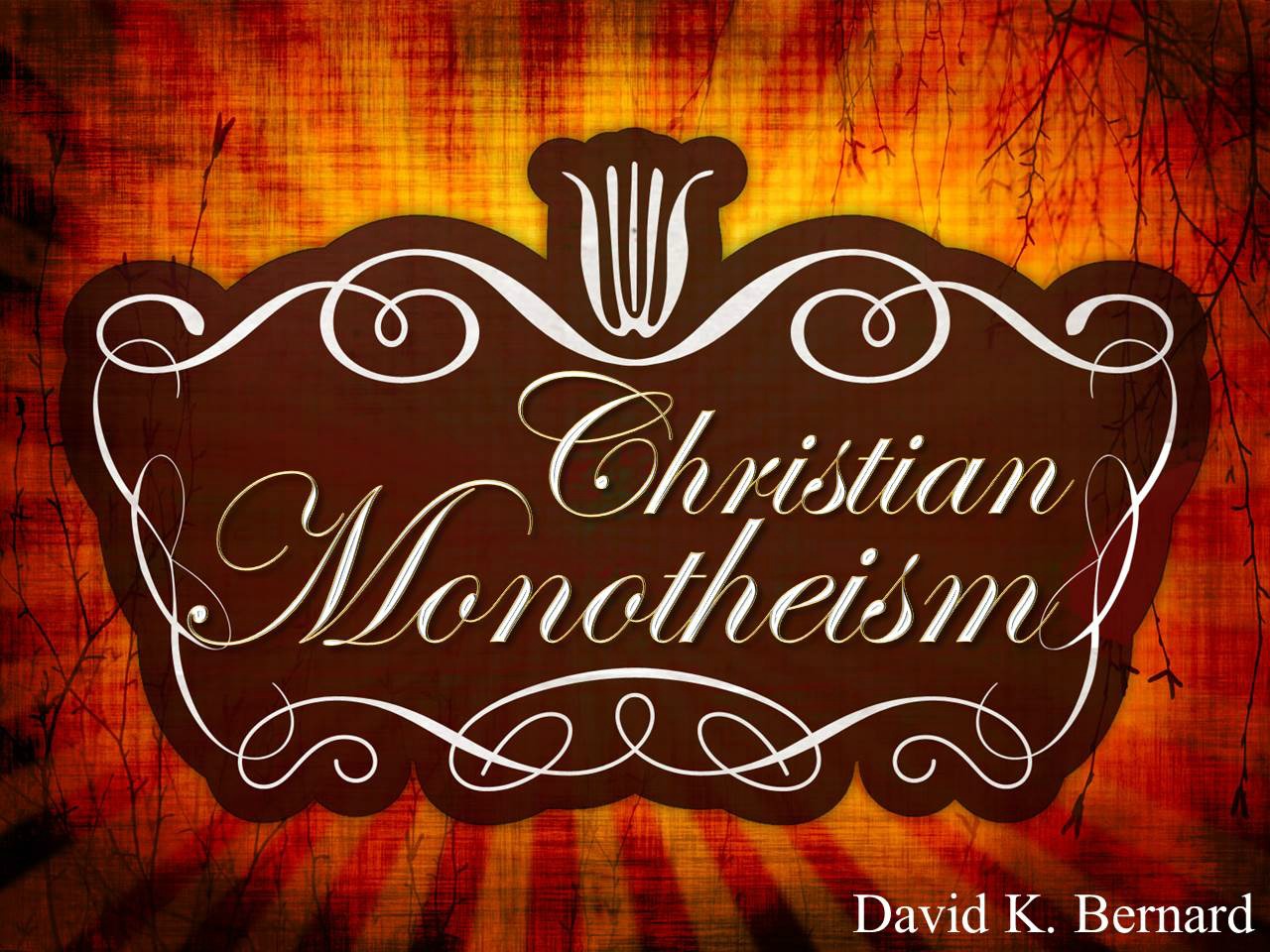 There is one God. There is only one God. This doctrine is central to the Bible message, for both the Old Testament and the New Testament teach it plainly and emphatically. Despite the simplicity of this message and the clarity with which the Bible presents it, many who believe in the existence of God have not understood it. Even within Christendom many people, including theologians, have not comprehended this beautiful and essential message. Our purpose is to address this problem, and to affirm and explain the biblical doctrine of the oneness of God.

The belief in only one God is called monotheism, which comes from two Greek words: monos, meaning alone, single, one; and theos, meaning God. Anyone who does not accept monotheism can be classified as one of the following: an atheist—one who denies the existence of God; an agnostic—one who asserts that the existence of God is unknown and probably unknowable; a pantheist—one who equates God with nature or the forces of the universe; or a polytheist—one who believes in more than one God. Ditheism, the belief in two gods, is a form of polytheism, and so is Ditheism, the belief in three gods. Among the major religions of the world, three are monotheistic: Judaism, Islam, and Christianity.

Within the ranks of those labeling themselves Christian, however, there are several divergent views as to the nature of the Godhead. One view, called trinitarianism, asserts that there are three distinct persons in the Godhead—God the Father, God the Son, and God the Holy Ghost—but yet one God.

Within the ranks of trinitarianism, one can discern two extreme tendencies. On the one hand, some Trinitarians emphasize the unity of God without having a carefully developed understanding of what is meant by three distinct persons in the Godhead. On the other hand, other Trinitarians emphasize the threeness of the trinity to the point that they believe in three self-conscious beings, and their view is essentially tritheistic.

In addition to trinitarianism, there is the doctrine of binitarianism, which does not classify the Holy Ghost as a separate person but asserts belief in two persons in the Godhead. Many monotheists have pointed out that both trinitarianism and binitarianism weaken the strict monotheism taught by the Bible. They insist that the Godhead cannot be divided into persons and that God is absolutely one.

These believers in strict monotheism fall into two classes. One class asserts that there is only one God, but does so by denying, in one way or another, the full deity of Jesus Christ. This view was represented in early church history by the dynamic monarchians, such as Paul of Samosata, and by the Arians, led by Arius. These groups relegated Jesus to the position of a created god, subordinate god, junior god, or demigod.

The second class of true monotheists believes in one God, but further believes that the fullness of the Godhead is manifested in Jesus Christ. They believe that Father, Son, and Holy Spirit are manifestations, modes, offices, or relationships that the one God has displayed to man. Church historians have used the terms modalism and modalistic monarchianism to describe this view as held by such early church leaders as Noetus, Praxeas, and Sabellius. In the twentieth century, those who believe in both the indivisible oneness of God and the full deity of Jesus Christ frequently use the term Oneness to describe their belief. They also use the terms One God and Jesus Name as adjectives to label themselves, while opponents sometimes use the misleading or derogatory designations “Jesus Only” and “New Issue.” (The label “Jesus Only” is misleading because to Trinitarians it implies a denial of the Father and the Holy Spirit. However, Oneness believers do not deny the Father and Spirit, but rather see Father and Spirit as different roles of the One God who is the Spirit of Jesus.)

Having surveyed the range of human beliefs about the Godhead, let us look at what the Word of God—the Bible—has to say on the subject.

The Old Testament Teaches There Is But One God

The classic expression of the doctrine of one God is found in Deuteronomy 6:4. “Hear, O Israel: the LORD our God is one LORD.” This verse of Scripture has become the most distinctive and important statement of faith for the Jews. They call it the Shema, after the first word of the phrase in Hebrew, and they often quote it in English as “Hear, O Israel, the LORD is our God, the LORD is one.” (See also the NIV.) Traditionally, a devout Jew always tried to make this confession of faith just before death.

In Deuteronomy 6:5, God followed the announcement of the preceding verse with a command that requires total belief in and love for Him as the one and only God: “And thou shalt love the LORD thy God with all thine heart, and with all thy soul, and with all thy might.” We should notice the importance which God attaches to Deuteronomy 6:4-5. He commands that these verses be placed in the heart (verse 6), taught to the children throughout the day (verse 7), bound on the hand and forehead (verse 8), and written on the posts and gates of houses (verse 9).

Orthodox Jews literally obey these commands today by binding tefillin (phylacteries) on their left forearms and on their foreheads when they pray, and by placing mezuzah on their doors and gates. (Tefillin are small boxes tied to the body by leather straps, and mezuzah are scroll-shaped containers.) Inside both types of containers are verses of Scripture handwritten in black ink by a righteous man who has observed certain purification rituals. The verses of Scripture usually are Deuteronomy 6:4-9, 11:18-21, Exodus 13:810, and 13:14-16.

During a trip to Jerusalem, where we gathered the above information,[1] we attempted to buy tefillin. The Orthodox Jewish merchant said he did not sell tefillin to Christians because they do not believe in and have the proper reverence for these verses of Scripture. When we quoted Deuteronomy 6:4 and explained our total adherence to it, his eyes lit up and he promised to sell to us on the condition that we would treat the tefillin with care and respect. His concern shows the extreme reverence and depth of belief the Jews have for the concept of one God. It also reveals that a major reason for the Jewish rejection of Christianity throughout history is the perceived distortion of the monotheistic message.

Many other Old Testament verses of Scripture emphatically affirm strict monotheism. The Ten Commandments begin with, “Thou shalt have no other gods before me” (Exodus 20:3; Deuteronomy 5:7). God emphasized this command by stating that He is a jealous God (Exodus 20:5). In Deuteronomy 32:39, God said there is no other god with Him. There is none like the LORD and there is no God beside Him (II Samuel 7:22; I Chronicles 17:20). He alone is God (Psalm 86:10). There are the emphatic declarations of God in Isaiah.

“O LORD of hosts, God of Israel, that dwellest between the cherubims, thou art the God, even thou alone, of all the kingdoms of the earth: thou hast made heaven and earth” (Isaiah 37:16).

There is only one God, who is the Creator and Father of mankind (Malachi 2:10). In the time of the Millennial Reign, there shall be only one LORD with one name (Zechariah 14:9).

A common remark by some Trinitarians about the Old Testament doctrine of the oneness of God is that God only intended to emphasize His oneness as opposed to pagan deities, but that He still existed as a plurality. However, if this conjecture were true, why did not God make it clear? Why have the Jews understood not a theology of “persons” but have insisted on an absolute monotheism? Let us look at it from God’s point of view. Suppose He did want to exclude any belief in a plurality in the Godhead. How could He do so using then-existing terminology? What strong words could He use to get His message across to His people? When we think about it, we will realize that He used the strongest possible language available to describe absolute oneness. In the preceding verses of Scriptures in Isaiah, we note the use of words and phrases such as “none, none else, none like me, none beside me, alone, by myself,” and “one.” Surely, God could not make it plainer that no plurality whatsoever exists in the Godhead. In short, the Old Testament affirms that God is absolutely one in number.

The New Testament Teaches There Is But One God

Jesus emphatically taught Deuteronomy 6:4, calling it the first of all the commandments (Mark 12:29-30). The New Testament presupposes the Old Testament teaching of one God and explicitly repeats this message many times.

“Thou believest that there is one God; thou doest well: the devils also believe, and tremble” (James 2:19).

In subsequent chapters we will explore New Testament monotheism in greater depth, but the above verses of Scripture are sufficient to establish that the New Testament teaches one God.

As we have seen, the whole Bible teaches a strict monotheism. God’s people have always been identified with the one-God message. God chose Abraham because of his willingness to forsake the gods of his nation and his father and to worship the one true God (Genesis 12:1-8). God chastised Israel every time she began to worship other gods, and polytheistic worship was one of the main reasons that God finally sent her into captivity (Acts 7:43). The Savior came to the world through a nation (Israel) and through a religion (Judaism) in which the people had finally purged themselves of polytheism. They were thoroughly monotheistic.

Today, God still demands a monotheistic worship of Him. We in the church are heirs of Abraham by faith, and this exalted position demands that we have the same monotheistic faith in the God of Abraham (Romans 4:13-17). As Christians in the world we must never cease to exalt and declare the message that there is only one true and living God.

This article “Christian Monotheism” was excerpted from the book The Oneness of God written by David K. Bernard. It may be used for study & research purposes only.