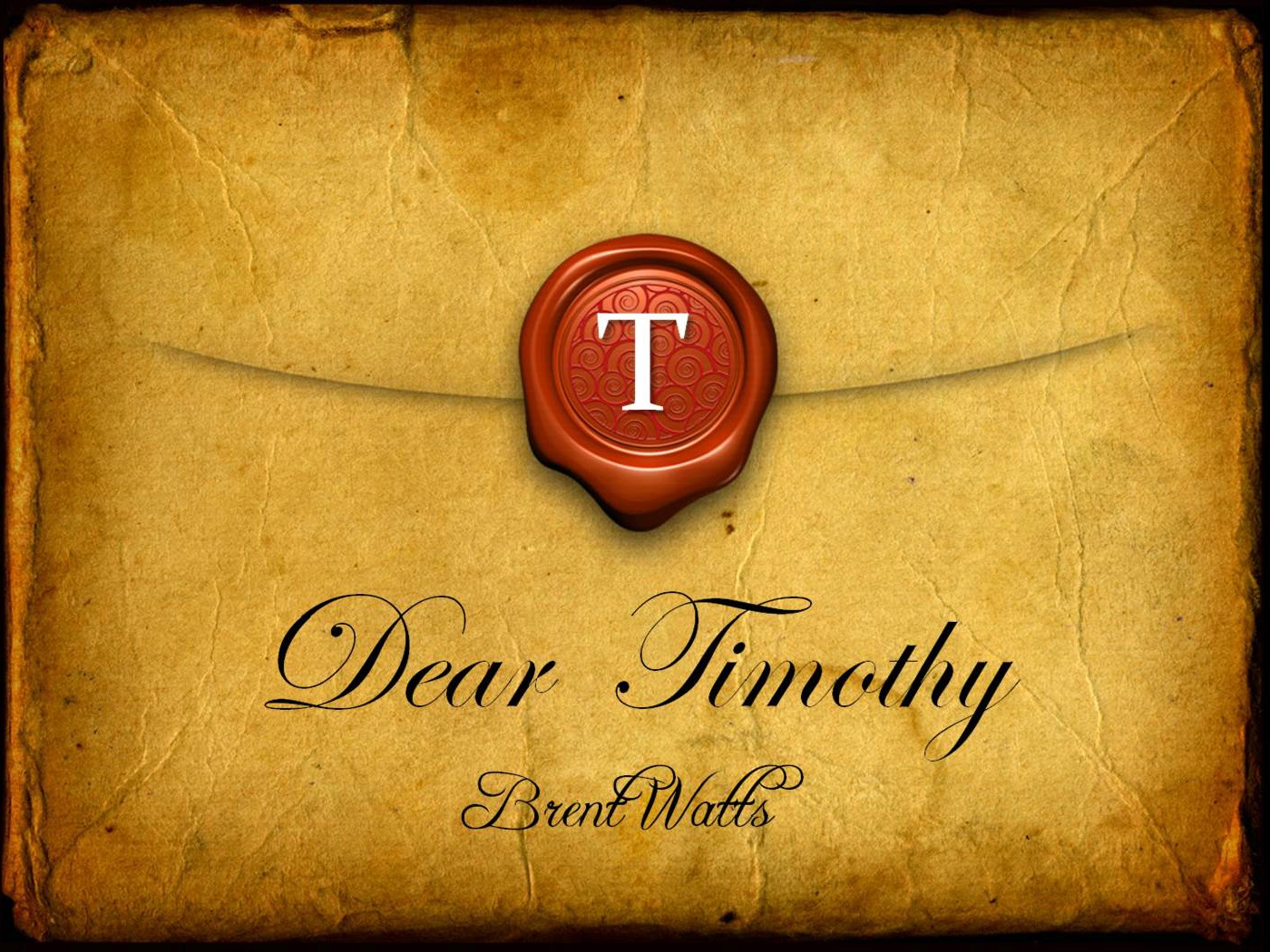 I have been asked to pass on in an open letter to young ministers what I felt were the most important principles for a young minister to live by. I guess the following would summarize what could easily become a lengthy dissertation.

Young man, learn how to pray. Biblical praying cares little for neither voluminous words nor long prayers of endurance, but rather a constant attitude of prayer that involves a meaningful communication with God. Jesus taught men how to pray in less than sixty seconds (Matthew 6:9), but took three years showing them how. We must not forget his rudimentary words, “When you pray, say.”

Every young minister needs to learn to communicate audibly with God apart from constant repetition. Personality may determine to some extent our body language and the volume we use in prayer, but must not force us into silent prayer or vain repetition. As important as praise, petition, praise (the prayer sandwich) is to effective praying, little value will be realized if one does not learn to say from his heart.

Jesus Christ expects and deserves more communication from us than the constant repetition of His name or such phrases as “God have mercy,” “Jesus have mercy,” “help us.” Times of great contrition may merit this kind of repetition but must never be the extent of our conversations with Deity. Prayer is a learned skill, a valuable, indispensable tool sharpened by practice. Lord, teach us to pray.

Personal integrity constitutes the only foundation on which to build a lasting relationship with God or man; God’s first miraculous act of judgment in the early church was experienced by two well-thought-of saints, Ananias and Sapphira, who chose to deceive in a money matter (Acts 5:1). The apostle Peter through a word of knowledge uncovered their deceit. For some strange reason, this first notable problem of the early church has returned to plague even the ministry in the later days of the church. Partial statements meant to deceive constitute dishonesty. Exaggeration of numbers designed to impress strikes at the very heart of honesty and integrity. Statements such as “I’ve never seen such a move of God” and “I’ve never experienced anything like this before” need to be used very carefully. Strong preaching against any lust or sin while practicing the same constitutes dishonesty. God may bless and honor His Word but will never accept the worker of iniquity regardless of the great results claimed through the supposed operation of the gifts. (See Matthew 7:22-23.) Timothy, in all things, even when inconvenient, even when pressured, speak the truth and lie not to God nor men.

Handle both your personal finances and the finances of the church in a manner above reproach.

Be a Christian. The highest honor throughout this life is enjoyed by those referred to as Christians. Their lifestyles so patterned the life of Jesus Christ their peers dared to call them Christ-like. We need to be reminded according to Scripture this definitive title required more than a New Birth experience and even more than a great sweeping revival. Jerusalem, a most unlikely city with a most unlikely group of twelve men without the best reputation experienced great revival, but none were called Christians. Samaria followed – the sorcerer was defeated, powers of hell were broken, great joy filled the city, all were baptized and later received the Holy Ghost, but none were called Christians.

Have we forgotten the import and impact of those pro-found words, “The disciples were called Christians first at Antioch” (Acts 11:26). Why? Barnabas returned to Antioch with a called Saul to help teach and pastor this church. The Antioch church has roots in the persecution of Jerusalem. Saul before his revelation and conversion had beat, imprisoned, and put to death both men and women. They fled his violent, murderous assaults and some of these widows, orphans, and others permanently crippled traveled to Antioch where they proceeded to preach Jesus. Approximately five years later, they would be asked to forgive and receive their tormentor as their spiritual leader. Barnabas had returned to Antioch from Tarsus with Saul the persecutor turned preacher by God’s miraculous power.

Saul had to accept God’s total forgiveness, forgive himself, and face those he had persecuted. Not only would those persecuted and now living in Antioch have to deal with forgiving Saul, they would have to work through their own feelings against God. God had intervened in Saul’s life revealing Himself to Saul just days, weeks, or months after Saul left these people fatherless, orphans, widows, and cripples. No doubt in their mind the lingering question remained, God was going to save Saul anyway, why did He wait until they had suffered so severely? Saul would now be their spiritual leader, their teacher.

One year passed, and the Holy Ghost called Barnabas and Saul to foreign missions. Having submitted themselves to the spiritual leadership of Saul, having lived the law of Christ concerning forgiveness, the disciples in Antioch could now be called Christians (Christ-like).

Could it be that before God can use a church to send forth missionaries through the direction of the Holy Ghost, the people must learn to forgive as Antioch did? Jesus, with unprecedented authority, declared, “If ye forgive men their trespasses, your heavenly Father will also forgive you: But if ye forgive not men their trespasses, neither will your Father forgive your trespasses” (Matthew 6:14¬15). He also threatens to recall all insurmountable forgiven debt on one who would not forgive his fellow servant and debtor (Matthew 18:24-35).

Let every young preacher learn the lesson of Antioch; until we can let go of all bitterness and completely forgive those who have hurt us the most, we are not Christian. From the dry, parched lips of the innocent One who suffered Calvary’s greatest agony came the words, “Father, forgive them; for they know not what they do.” No room exists, nor can any bitter, unforgiving spirit be tolerated in the life of a believer. God can force us into a position where we must deal with deep-seated emotions and feelings. He did this for those persecuted at the hand of Saul and living in Antioch five years after their worst nightmare of persecution. God placed these persecuted believers in a place under Saul’s leadership where they would have to deal with their feelings. He then provided the supernatural power of the Holy Ghost which enabled them to accept their tormentor as their pastor. Holding no offense, forgiving others, and asking forgiveness of those we offend is a prerequisite to the ministry.

The Word of God. A man’s approach to the Word of God will soon determine his success or failure. A deep hunger for the truths evident and not so evident in the Bible and a willingness to search the Word coupled with an interesting presentation of the same translates into a successful ministry. This obviously has for its foundation the personal call of God into the ministry as well as God’s anointing upon the individual. Personal time, family time, and the need for rest and relaxation must never be allowed to tempt us into selling the Bible study short or to passing along a mediocre or worn out message.

One must be careful not to rely on others’ anointing through books and tapes to become his source of inspiration. Drawing from these resources is certainly profitable but must never be seen as a substitute for personal inspiration and fresh insight through the personal study of God’s Word. God wants to freshly and fervently inspire us for the benefit of those attending any given service. This should constitute the main goal and purpose of our lives.

Family relationship. Refusing to live a lavish lifestyle far above the people one preaches to can be called wisdom. However, subjecting one’s family to unnecessary want and need does little good and often causes resentment and bitterness in the family structure. God has never required a man to sacrifice his family for a church. Too many ministers have lost their children and some of their marriages unnecessarily by unwise decisions and conduct but never because they sought first the kingdom of God. God will not accept the blame for lack of wisdom on our part. When the wife and children feel a vital, essential, and necessary part of the ministry and sacrifice together, they all receive strength. One must save his family and not sacrifice them.

Protecting one’s ministry – sexual morality. Travel alone if you must, but only as an exception and never as a lifestyle. Save yourself from unwanted trouble and struggles by keeping your family close to you both emotionally and in proximity. Fleeing youthful lusts, abstaining from the very appearance of evil, and humbling one-self before God are safe barriers to live behind and safe boundaries to function within.

According to Proverbs 22:14, “He that is abhorred of the LORD shall fall therein [into the mouth (the seduction) of a strange woman which is a deep pit].” Proverbs 6:16-19 tells us what God abhors – pride and lying along with causing disunity. A minister who stays a safe distance from these will spare himself morally.

God’s Word declares those who become proud, arrogant, dishonest, or a promoter of disunity will fall morally into the pit (the mouth of the strange woman) apparently by God’s doing. A trusted friend to whom you answer may be of great importance and value. However, Joseph’s words when faced with a moral choice still hold the only solution to the sin of moral failure. Paraphrased – This is a great wickedness and because of my earthly relationship with someone who trusts me with everything he possesses and because of my relationship with God, I cannot do this. No friendship or counseling will save a man morally who no longer prizes loyalty to others and his relationship or commitment to God.

Submission to authority. One last word to young ministers – submit yourself to those who rule from the grave and to those living who hold positions of leadership if you expect others to submit to your spiritual leadership. Obedience to one verse of Scripture would have forever kept only one Christian church in the world. The writer of Hebrews obligated all living believers to submit to the rule of past deceased leaders (Hebrews 13:7), as well as those who are alive in positions of spiritual leadership (Hebrews 13:17). The doctrines of the apostles would have never been replaced by the doctrines of men had these commandments been followed. We have no right to change the God-given truths passed on to us by those God-fearing Holy Ghost men now departed who preached to us the salvation message.

A minister who answers to no one and who submits to no leadership other than himself lives outside of both New Testament instruction and example. Never ignore the counsel of the majority of your brethren and become a law unto yourself doing what is right in your own eyes.

By God’s grace and through the keeping power of the Holy Ghost coupled with right decisions, we can be men of God always doing the will of God on the earth.

The above article, “Dear Timothy” is written by James Merrick. The article was excerpted from Brent Watts’s book, Dear Timothy: Letters from the Hearts of Elders.