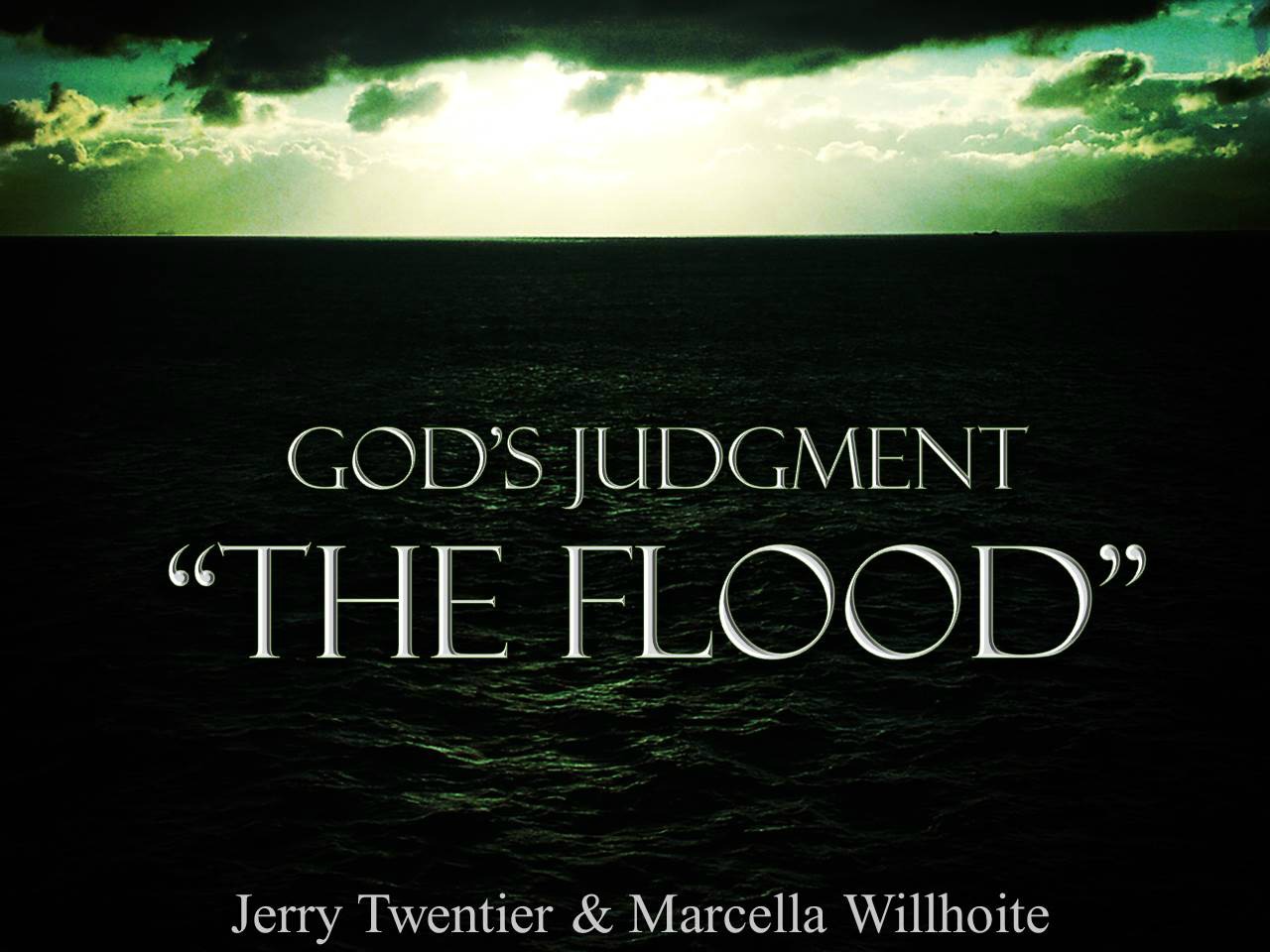 To righteous Noah, God announced some startling plans! The entire world would be destroyed by a flood! Only Noah’s family would escape the catastrophe and then re-establish the human race. Because God only intended to annihilate wicked mankind, land animals were preserved from the devastating Flood.

Exact blueprints were given for constructing the escape vehicle. Noah must build an ark. Using the 18-inch cubit, its dimensions would be a monstrous 450 x 75 x 45 feet structure. Or if the great cubit of 22 to 25 inches was used, the ark measured approximately 600 x 100 x 60 feet.

The ark is believed to have featured a flat bottom, designed like a floating barge. The word “ark” is derived from Egyptian dialect, signifying a “chest” or “floating object.” Most likely, it was built efficiently and compactly on the bow, or stern. Not intended for sailing or cruising, the ark was to float upon the water’s surface.

Gopher wood, the specified material for construction, is from an uncertain origin. Perhaps cypress, the principal material for ancient shipbuilding, was used. Geologists and archeologists believe that cypress trees were plentiful in the Mesopotamian Valley where the ark was likely built.

Light and ventilation were furnished through a single window. Perhaps this “window” referred to the opening along the entire length of the ark on each of the three-deck levels. To have lived in an airtight boat with its foul odors and refuse for one year and seventeen days would have been impossible without light and fresh air. A covering of pitch or tar inside and outside waterproofed the ark and also protected against marine animals swimming in the water. One large door was constructed in the side.

How long did it take to build the ark? Some people interpret Genesis 6:3 to mean it took 120 years. However, the Bible indicates a much shorter time. According to Genesis 6:8-10, 17-18, Noah already had three married sons when God initially approached him with building plans.

Genesis 11:10 says that Shem was “an hundred years old, and begat Arphaxad two years after the flood.” Therefore, Shem was ninety-eight years old when the Flood ended and about ninety-six when it began. The ark would have been built sometime between Shem’s marriage and his ninety-sixth birthday. According to Genesis chapter 5, most men in those days did not marry until around sixty-five or older. This suggests the ark was built during the thirty-one years between Shem’s marriage and the beginning of the Flood.

Which Animals Were In The Ark?

Could Noah’s ark contain two of every kind of animal—plus seven each of the clean ones? A primary secular argument against a worldwide flood is the housing of all the animals with necessary food for a ride lasting one year and seventeen days! Modern taxonomy estimates there are about one million different species. However, over ninety-five percent have a natural water habitat and could have existed outside the ark. About 88,000 species are types of shellfish or worms that could survive in water or on floating bits of debris.

Ernst Mayr, a leading taxonomist, lists a total of 17,600 species of mammals, birds, reptiles, and amphibians, many of which could also survive outside the ark. Only about 3,500 mammal species are known—and some of them are marine (Whitcomb and Morris, Genesis Flood, page 69).

Most animals are small. Perhaps God also sent the young ones of each species for maximum reproduction to replenish the earth after the Flood. Had Noah taken all 17,600 species on board, the average size would have been very small, considering that more than half are birds.

Floor space on the three-storied ark possibly measured 33,750 square feet on each deck. If the average animal is the size of a sheep, the ark contained 569 standard railroad stock cars full. One deck, therefore, would have provided adequate space for all the animals, one deck for food storage and another as living quarters for Noah’s family.

But what about the dinosaurs and other prehistoric animals excavated from every continent of the world? The fossils of these gigantic creatures are puzzling. Did dinosaurs actually live in Noah’s day? If so, was a pair on his boat?

Dr. Henry Morris of the Institute for Creation Research believes there were. Fossil footprints of dinosaurs and man have been found side-by-side in Glen Rose, Texas, indicating these creatures lived concurrently with, not preceding man. Does the Bible mention such monstrous animals? The first chapter of Genesis states: “God created the great sea monsters” (Genesis 1:21, NASB). The King James Version uses the words “great whales.” But this Hebrew word is translated in other passages as “dragon.” Therefore, the creation account actually reads: “God created great dragons.”

Practically every nation of antiquity mentions dragons in their early history. Cave pictures depict immense creatures resembling varieties of dinosaurs that once roamed the earth. There could have been a pair on board as shown by later biblical references. Job, chapters 40 and 41, describes two enormous creatures—the behemoth and leviathan—similar to these huge reptiles. Of course, they have long since vanished with other extinct animals. Yes, the ark would have had sufficient room even for a pair of young, prolific dinosaurs and other so-called prehistoric monsters!

When the ark was completed, the Lord instructed Noah and his family to enter. They chose to go inside the same as the others chose to remain outside. Of all clean beasts, Noah took seven to assure their continued existence after the Flood and to offer as sacrifices to the Lord. Of the unclean, only two—a male and female—were taken.

In simple but impressive words, the Bible describes the horrible catastrophe. Nothing is mentioned of the death struggle; no cries of despair. Only one impression looms—all mankind was utterly destroyed except Noah’s family.

Oh, the horror of those clinging to huge rocks and fathers reaching for children and wives. Both man and wild beasts desperately sought safety. Perhaps some pounded on the ark, expecting Noah to allow them inside. But God had shut the door!

The fountains of the great deep were broken up and the windows of heaven were opened. Slowly, the waters rose fifteen cubits above the highest mountain. For 150 days, the earth was a shoreless ocean. Only one boat was floating—and it without a human captain.

Was the Flood really universal or just local? The biblical narrative implies a worldwide deluge. Otherwise, how could the waters have covered the highest mountains without overflowing to unaffected areas? And why should Noah have built such a large vessel?

Geological discoveries also support a global flood. From England, France, Spain, Germany, Russia, China, Aztec Indians in Mexico and many areas of the United States have came reports of enormous mounds of skeletal animal remains. Surprisingly, most finds include many different types of animal species of considerable height jammed together in isolated areas, indicating an attempt to find safety. Carnivorous and herbivorous creatures alike sought refuge on the same elevation, only to meet a common watery grave (Alfred M. Rehwinkel, The Flood).

Recent claims report the ark still in existence on Mount Ararat in Turkey. As yet the evidence is inconclusive. However, there are some interesting finds. Scientists and theologians have jointly undertaken this challenging task, attempting to identify a ship like object situated at the top of Greater Ararat.

Many explorers and scholars claim that the ark was never lost. More than two hundred historical references are recorded by individuals claiming to have seen it. Three hundred years before Christ, Berosis, a Chaldean priest, wrote of Noah’s ark on Mount Ararat—approximately 2,200 years after the Flood! World explorer Marco Polo visited Ararat en route to China and returned with his own accounts. Several explorers in recent years claim to have seen it. Engineers and scientists have confirmed that an estimated fifty tons of hand-hewn timber, still largely intact and shaped like a huge ship, is preserved inside an ice glacier on the mountainside. Their question is: how did all that wood perch on a mountain that is covered by ice and snow practically year round?

Some of the timbers resting in the ice pack at the 14,000-foot level are more than one hundred feet long, hand tooled, extremely hard, and saturated with pitch. No helicopter or bulldozer could lift one of those timbers to that altitude. The remaining feasible explanation is that they floated there.

Ed Behling from Cunnison, Colorado, reports this account from his Air Force assignment while stationed in Diyarbakir, Turkey: “It was basically square. The ceiling was slightly tapered, maybe five or ten degrees, just enough so water could run off … basically, it was a big box that was very long . . . I don’t know how long” (Webber, A New Search For Noah’s Ark).

Since this mountainous region is steep, impassable, and volcanic, perhaps we shall never know for certain. Whether or not documented evidence is ever produced, the historicity of the ark does not lie on Mount Ararat, but rather in our faith in God’s inspired Word.

Comparison between Days of Noah and Coming of Christ

Jesus compared existing world conditions at the time of His return to those of Noah’s day:

Peter added these words: “Knowing this first, that there shall come in the last days scoffers, walking after their own lusts, and saying, Where is the promise of his coming? for since the fathers fell asleep, all things continue as they were from the beginning of the creation. For this they willingly are ignorant of, that by the word of God the heavens were of old, and the earth standing out of the water and in the water: whereby the world that then was, being overflowed with water, perished: but the heavens and the earth, which are now, by the same word are kept in store, reserved unto fire against the day of judgment and perdition of ungodly men” (II Peter 3:3-7).

From these accounts we see these comparisons:

(Use current statistics of crime and unlawfulness of every facet in society from local newspapers or magazines to enforce the Scriptures concerning the wickedness and corruption preceding the coming of the Lord.) From the combined scriptural evidence, which we shall study later in greater detail, our generation will be living on earth when Christ returns. Search For Truth #2 is intended to help us prepare for the most wonderful event in the history of mankind—the second coming of Christ when saints shall rise from the earth to meet Him in the clouds.

This article “God’s Judgment – ‘The Flood’” by Jerry Twentier and Marcella Willhoite was excerpted from the book Search For Truth #2. Pg. 51-53. August 2011. It may be used for study & research purposes only.