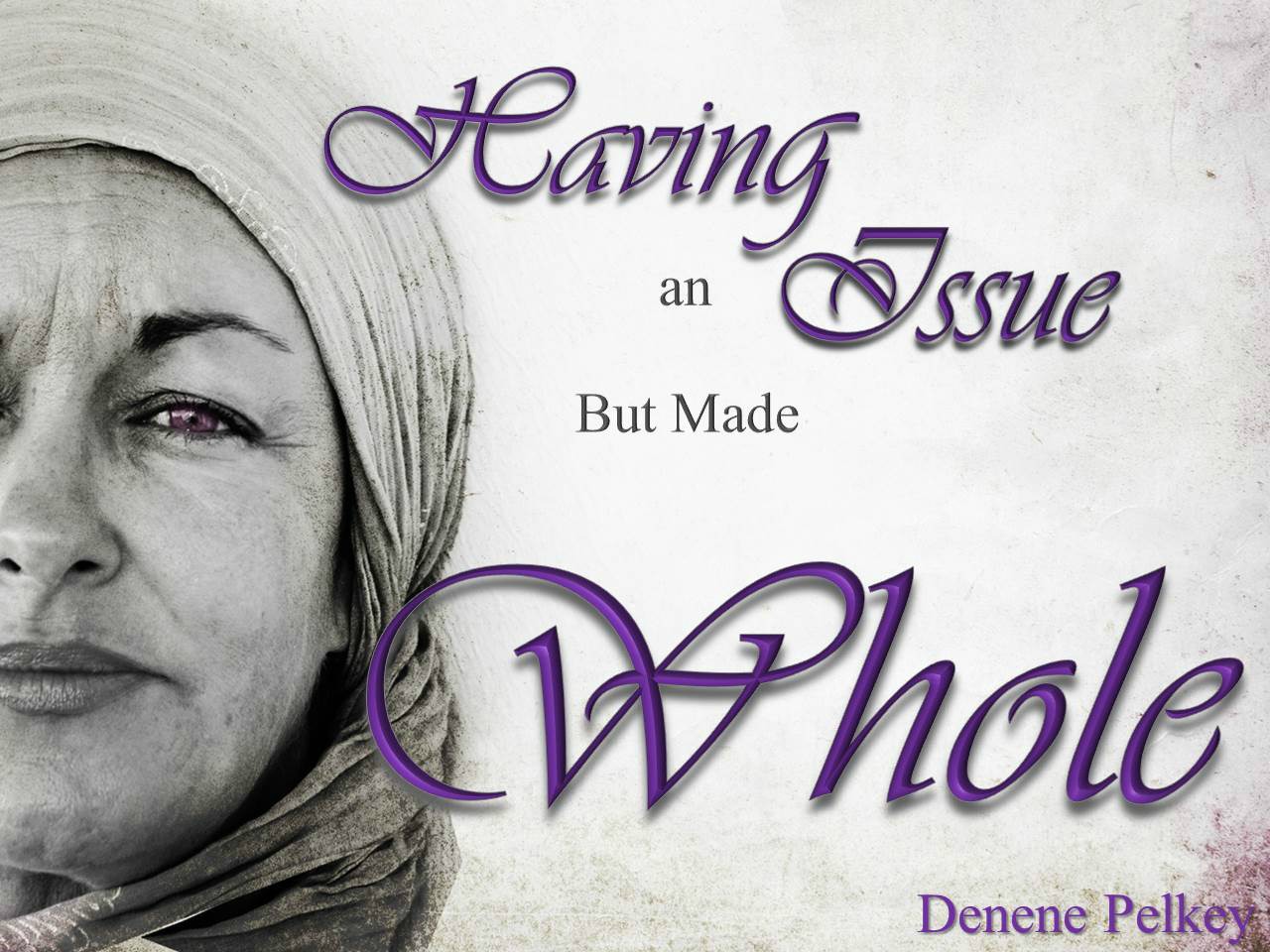 “And a woman having an issue of blood twelve years, which had spent all her living upon physicians, neither could be healed of any, came behind him, and touched the border of his garment: and immediately her issue of blood stanched. …And he said unto her, Daughter, be of good comfort: thy faith hath made thee whole; go in peace” (Luke 8:43-44, 48).

This woman had suffered from hemorrhages for twelve years. Luke said that although she had spent all her money on physicians none of them found the reason for her illness, and none of them found a cure. She had put her trust and poured her money into the hands of these physicians and never found relief. Many times people search for answers to physical and emotional problems and only become worse. The One who has the answers to life’s issues is Jesus.

In order to find the answers to life’s issues, one must be willing to go to the Master. Doctors “practice” medicine; they don’t know it all. But Jesus is the Great Physician. He knows everything about us, from how many hairs are on our head to the calluses or fallen arches on our feet. “Bless the LORD, O my soul, and forget not all his benefits: who forgiveth all thine iniquities; who healeth all thy diseases” (Psalm 103:2-3). (See Isaiah 44:2; 44:24; Psalm 103:14; Luke 12:7.)

This woman with the issue of blood was desperate and seemingly without hope. But something happened when she saw Jesus. Even though her strength was small, determination propelled her through the crowd to get close enough to touch the hem of His garment. It didn’t matter who was watching or who was in the way.

Suddenly her faith transcended the physician’s abilities and what they had done to her. She thought, If only I can touch his garment, I shall be made whole. Through faith, she saw herself enjoying wholeness, and that vision caused her to do something that, for her, would normally have been impossible- force her way through the crowd- and something she had never done before and had never seen anyone else do- touch the hem of His garment. When she saw Jesus, she knew that He was different from all other men and that an even was about to happen that would change her life forever.

As soon as she touched His garment, she felt divine virtue course through her body. Something supernatural happens when you make up your mind, push your way through, and touch the Lord. First, she made the decision and acted upon it in the face of her hopelessness. She didn’t allow her issues to determine her circumstances. Thus when she touched the Lord by faith, she was made whole immediately.

When Jesus made her whole, this woman was released from twelve years of physical issues, spiritual oppression, and mental and emotional distress. She no longer had to suffer the weakness and pain of her debilitating condition, and she no longer had to endure the shame of being counted as unclean. What an awesome God we serve! If HE could do it for her, He can do it for you! When Jesus sets you free, the chains fall off and stay off. This freedom brings physical, emotional and spiritual balance. The woman touched the fringe or tassels of twisted cords to the four corners of their outer garment to remind them of their covenant obligations under Moses’ law. (See Numbers 15:38-39; Deuteronomy 22:12, Zechariah 8:23.) This custom was to be observed throughout their generations so they would remember the Lord’s commandments, seek him, and be consecrated to Him. The constant reminder was supposed to deter them from serving any other God. We must keep in touch with the Lord so we are constantly reminded of his promises.

When this woman touched the hem of Jesus’ garment, He felt virtue (miraculous power) leave Him. He asked, “Who touched me?” Peter and the others who were with him announced the obvious: “Master, the throng is bumping and pushing to get close to you. It would be impossible to identify everyone who touched you.” They were clueless about what had happened when the women touched the fringe of Jesus’ garment.

Imagine how this woman felt when she realized that her issues had vanished! A great flood of joy and gratitude washed over her; that is, until the Master asked, “Who touched Me?” All of a sudden she felt a stab of fear; Jesus was about to confront her in front of the entire crowd. They all knew her and that if they touched or sat on anything she touched or sat on, they would be unclean the rest of the day until they bathed and washed their clothes (Leviticus 15:25-33). She knew that what she had received could not be hidden, so she stepped forward and fell down before Jesus, trembling and admitting before all the people the reason why she had touched His garment.

Jesus knows your troubles; He knows the pain deep within your heart. He took the stripes on His back and shed His lifeblood so you could be made completely whole. This woman didn’t allow her past or present state to ruin her future. She forced her way through the crowd to get to the source of strength and was made whole!

Suffering in one area affects the whole person. Depression can set in and darken a life.

The spirit of fear can hinder one from truly finding deliverance. This happens because a person has too many doubts to believe the promises in the Word. It takes people who will stand up and push their way to the only One who can set them free. It’s a continual pushing, a daily dying and sacrificing of self. If you have depressing or oppressing issues that are making you physically ill, touching the Holy One will allow His presence to wrap around you and renew you. You’ve got to cry out to Jesus and believe the promises in His Word.

Luke 5 records the healing of the paralytic. His four friends couldn’t force the ungainly stretcher through the crowd around the door of the house where Jesus was teaching, so they carried the stretcher up the stairs to the roof, removed enough tiles to let the stretcher through the hole, and lowered the suffering man so he could meet Jesus. When Jesus saw the faith of the four friends, he said to the paralytic, “Man, your sins are forgiven you.” In essence, this demonstrated to the crowd that Jesus was Good; only God had the authority to forgive sins. It also pointed to the truth that if the man’s body had been healed but his mind, spirit, and soul were still diseased, he was still not “whole.” Jesus made the man whole by forgiving his sins and healing his body.

In Luke 8:48, the woman with the issue of blood was ma de whole. The Greek word used here is sozo, which, in this instance, refers to deliverance from disease.8 In Luke 5:20, 24, Jesus forgave the paralytic’s sins, then healed him physically. For Jesus, it was no harder to forgive the man’s sins than it was to deliver him from disease. Jesus made both of these people whole so they could rise and live. It doesn’t matter how sick you are in your body or your soul, Jesus can do the same for you as He did for the woman and the man with physical and spiritual issues. It doesn’t matter how long you’ve been in the same situation, He can change it!

Jesus came that we might have life and have it abundantly. If you’ve been hurt, bitter, angry, or resentful for years, it’s time to be made whole so you can begin to live. Loose the situation from your life and bind it over to Jesus, and He will dispose of it. Continue to fight both your doubts and the enemy with the sword of the Word. Never give up! If there are still symptoms, just keep claiming the promises in the Word of God. Just as it did for the paralytic and the woman with the issue of blood, your faith can make you whole!

The chapter “The Whole Armor of God” written by Denene Pelkey was excerpted from Set Free: My Journey From Misery to Liberty and may be used for study and research purposes only.

1 thought on “Having An Issue, But Made Whole (Entire Article)”