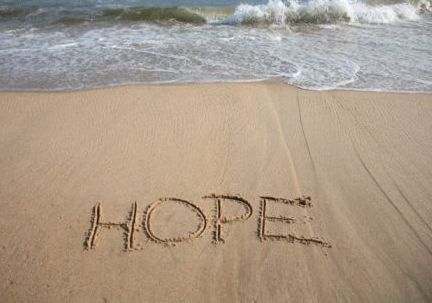 There is a story that was told by Mr. Halford E. Luccock in his book Unfinished Business that “One night at dinner a man, who had spent many summers in Maine, fascinated his companions by telling of his experiences in a little town named Flagstaff. The town was to be flooded, as part of a large lake for which a dam was being built. In the months before it was to be flooded, all improvements and repairs in the whole town were stopped. What was the use of painting a house if it were to be covered with water in six months? Why repair anything when the whole village was to be wiped out? So, week by week, the whole town became more and more bedraggled, more gone to seed, more woebegone. Then he added by way of explanation: “Where there is no faith in the future, there is no power in the present.”

When was the last time that you were motivated to break away from the humdrum attitudes caused by what seemed to be hopeless situations in your life? If we are not careful to allow Jesus to lead us through our valleys we will find ourselves becoming disillusioned, disheartened, and disenchanted with ourselves, others, and God.

There is nothing more destructive than a heart that has embraced hopelessness. Think about it. When was the last time that you really wanted to improve your image? When was the last time that you felt the drive to do something to better yourself or your present circumstances? My wife and I drove by what was once a beautiful home this morning. However, time and neglect had taken it’s toll on it. I’m not talking about some “antebellum mansion” that has stood through decade after decade of torturous storms. I’m talking about a home that judging by it’s architectural design and style was apparently somewhat modern. I had to turn to take a second look as we drove by because I could not believe that such a place of past splendor and beauty could be in such disarray. I’m reasonably sure it wasn’t in this condition because it was so far off the beaten path that no one would want it. It was located on a main thoroughfare just south of Jackson. In fact, there was a slender disheveled man standing in front of an old dilapidated Ford truck in front of the house as we were passing by.

My mind instantly began to do an investigative scan. Why would anyone let such a beautiful house get in the shape this one was in? If the man I saw was the owner of the house, why did he not take greater care to see that it was cleaned and properly maintained? Question after question came to mind as the scenes of trash piled up in the double car garage…the growth of untamed hedges and shrubbery wrapped themselves around the exterior…the lack of paint revealed the nakedness of siding that would have sheltered the inside for years to come. Why would anyone let a house get in such a terrible condition? Then suddenly a thought came to me.

Somewhere in it’s past this house was someone’s home. I could almost hear the laughter of children at play. I could smell the aroma of fresh baked apple pie. I could imagine the warm glow of a light in the window just after dusk that welcomed a weary worker home. Then I could feel the love that once met him at the door after a long hard day at work. But now it was all gone…the laughter…the aroma of fresh baked pies…the warm glow of a light…just figments of my imagination. The only explanation I can give is that somewhere down the dusty road of the past those who once lived there had lost hope. Now what was once a home is nothing but a monument to lost hope. It is not a home anymore it is just simply a dilapidated house with no warmth…no light…no future.

We must determine today whether we will be a house of God or a home of God. If we lose hope; then like the little town of Flagstaff and the old dilapidated house, we will allow the cares of life to destroy the picturesque beauty that only the Lord can paint in our lives. He does this by taking our hopeless situations and giving us hope through His leading. I for one will “choose” to allow the Spirit of God to make the changes necessary in me to keep me from allowing Satan to destroy my spiritual hope. The apostle Paul once said, “If in this life only we have hope in Christ, we are of all men most miserable.” 1 Cor 15:19 KJV My hope is not based upon the things of this life but the assurance that someday I will live with Him through eternity. After all He has gone to prepare a place for us.