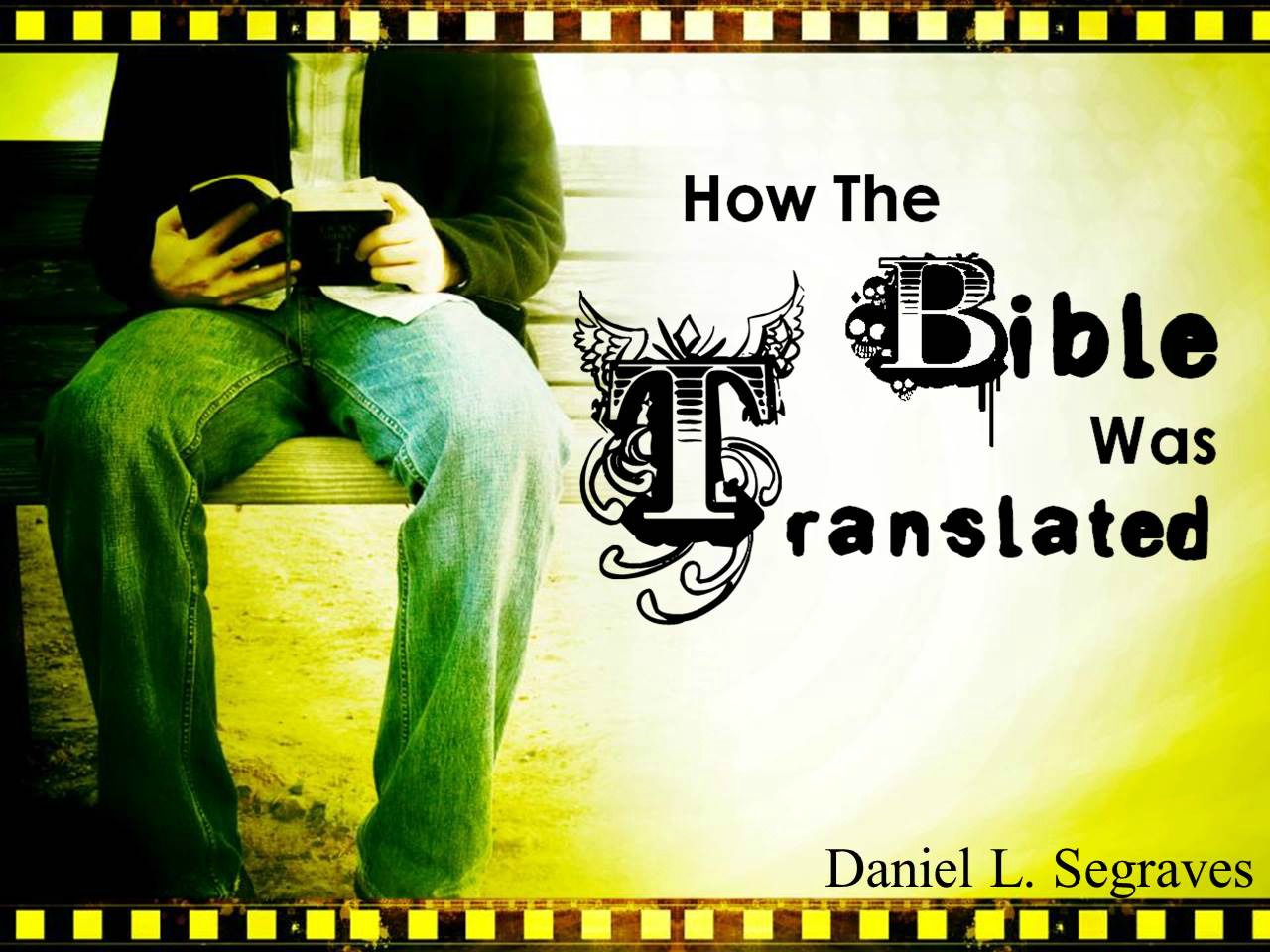 Purpose: This chapter is designed to give a brief overview of the history of Bible translations, with a special focus on translations in English.

Objectives: Upon completion of this chapter you should be able to:

If the Great Commission made it necessary to copy the Bible to carry its message around the world, it also made necessary the translation of the Scriptures into the various languages of the world. Within 50 years of the death of the Apostle John, translations began to be made.

The first such translation was made about 150 A.D. into the Syriac language. Other early translations included the Old Latin, Egyptian, Ethiopian and Armenian. In 350 A.D., the Bible was translated into the Gothic (Germanic) language. Shortly after this, in about 400 A.D., Jerome translated his famous work which became known as the Latin Vulgate and was for many centuries used by the Roman Catholic Church.

English Translations of Portions of the Bible

As far as we know, the first English translation was done in the seventh century by a monk named Caedmon. His work included parts of the Old and New Testaments. Tradition declares that Bede, an English cleric, translated the gospels into English, and that he was working on his translation of John when he died in 735 A.D. King Alfred the Great, who reigned from 871-899, translated parts of the Ten Commandments and the Psalms.

An English Translation of the Entire Bible

In the fourteenth century, John Wycliffe and his associates translated the entire Bible from Latin into English. Many religious leaders during Wycliffe’s time believed the Scriptures should not be made available to common people; they thought only trained clergymen should be able to read the Scriptures. As a result, several decades after he died, Wycliffe was declared a heretic and his bones were dug up, burned, and his ashes thrown into the Swift River near a church he once pastored.

The First English Translation from Hebrew and Greek

In 1483, the year after the birth of Martin Luther and exactly 100 years after the death of John Wycliffe, William Tyndale was born. He graduated from Oxford University and Cambridge University. By the time he was 30, Tyndale had committed his life to translating the Bible from the original languages into English.

The Roman Catholic Church was still opposed to the translation of the Bible into the language of the common people. Although Tyndale was allied with the Church of England, the English church was still under the authority of the pope, so Tyndale was not supported by the church in his efforts to translate the Scriptures. Working in exile, he produced the first complete printed New Testament in English to be translated from the original Greek sources. In May of 1535, Tyndale was arrested, tried and condemned to death for his work of translation. On October 6, 1536, he was strangled and burnt at the stake. His final words were the prayer, “Lord, open the king of England’s eyes.”

After finishing the New Testament, and before he was martyred, Tyndale had begun translating the Old Testament. After his death, an associate, Miles Coverdale, completed the translation of the entire Bible into English. By the time Coverdale had completed his work in 1537, Henry VIII, the king of England, had broken all ties with the pope and William Tyndale’s prayers were answered in a most unusual way. Henry VIII, who had condemned Tyndale to death, gave his royal approval to Coverdale’s translation, which was based on the work done by Tyndale.

Tyndale’s was the first of many translations to be made into the English language. Appearing in the same year as Coverdale’s translation was a translation by Thomas Matthew, a pseudonym For John Rogers. Because of its size and cost, this was called the Great Bible.

But the temperamental King Henry’s attitude changed and in 1543 the English Parliament passed a law making it a crime for any unlicensed person to read or explain Scriptures publicly. During this time many copies of Tyndale’s and Coverdale’s translations were burned in London.

After a brief period of leniency during the reign of Edward VI (1547-1553), Mary, the Roman Catholic daughter of Henry VIII, came to the throne determined to return England to Roman Catholicism. She is called bloody Mary because during her reign many Protestants, including John Rogers, were put to death.

While Mary was on the throne, many Protestants fled to Geneva, Switzerland for sanctuary. These Christians chose William Whittingham to make an English translation of the New Testament. His work became known as the Geneva Bible. When Elizabeth was crowned queen of England, these reformers returned from Geneva, bringing with them the Geneva Bible, which was the first to be divided into verses and to omit the Apocrypha.

For 60 years, the Geneva Bible was popular among the common people in England, but it was not acceptable to many leaders of the Church of England because of it included marginal notes reflecting the comments of John Calvin. But these leaders recognized that the Geneva Bible was a superior translation to the Great Bible, so they initiated a revision of the latter, which was published in 1568 and known as the Bishops’ Bible.

In 1603, King James VI of Scotland ascended to the throne of England as James I. He was presented with a petition signed by many clergymen, including a strong representation of Puritans, requesting that certain steps be taken to “purify” the Church of England from vestiges of Roman Catholic influence. John Reynolds, a Puritan leader and president of Corpus Christi College. Oxford requested the king to authorize a new, more accurate translation. Since the Bishops’ Bible had not been successful in replacing the people’s love for the Geneva Bible, and since James disapproved of the marginal notes in the Geneva Bible, he approved the translation.

More than 50 scholars trained in Hebrew and Greek began the work of translation in 1607. They were instructed to follow the Bishops’ Bible as long as it was faithful to the original text and to consult the translations of Tyndale, Matthew, Coverdale, the Great Bible, and the Geneva Bible.

The Hebrew text from which the translators worked was the Massoretic Text, which is widely recognized by scholars and confirmed by recent discoveries of ancient manuscripts to be the best representative of the original Hebrew scripts. The Greek text was largely the Received Text, a Byzantine-type text which agrees in all but a few places with the Majority Text.

In 1611, the King James Version, or Authorized Version, was finished. It was a magnificent translation which within 50 years had replaced the Geneva Bible as the favorite translation of English-speaking Protestants.

Revisions of the King James Version

The inspiration of Scripture extended only to the original authors and manuscripts. Just as those who copied manuscripts were not inspired, Bible translators were not inspired. Inspiration has to do with the way in which God moved the original authors to write and preserved them from all error. Many who have copied manuscripts over the past 1900 years have done so with the greatest care for accuracy, but there is no guarantee any copy will be absolutely perfect. This is demonstrated by the fact that there are differences between the manuscripts, however minor they may be. This makes necessary the science of textual criticism, or the scholarly work of comparing ancient manuscripts to determine original readings.

Likewise, as skilled and careful as translators may be, there is always room for improvement in their work. And no matter how accurate the translation itself may be, it still has to pass through the hands of typesetters, proofreaders and printers.

Thus, the King James Version has been through many revisions since 1611. Indeed, two editions were published in 1611, with one correcting several printer’s errors in the other. In 1612, another reprint corrected mistakes in the second 1611 edition. In 1613, another revision was released correcting still more mistakes in the 1611 edition. Considerable revision was done in a 1616 reprint, and fewer corrections in a 1617 edition.

The greatest revision of the King James Version to that time occurred in 1629, when the first edition of the KJV without the Apocrypha was released. This was the first time the KJV was published by someone other than the King’s Printers. Thomas and John Buck, Cambridge University printers, released the 1629 edition, and Thomas Buck and Roger Daniel published another edition in 1638. These two revisions of the KJV involved revision of the text, of the use of italics and of marginal notes. In the meantime, other editions were being released by the king’s printers in 1630 and 1634.

In 1640, the king’s printers released an edition of the KJV which came to be known as the “Wicked Bible” because it inadvertently left out the word “not” in the seventh of the Ten Commandments.’ The printer was given a substantial fine. Other editions were released in 1653, 1655, 1656 and 1657.

The first edition of the KJV to contain dates in the margin was published in 1701 in 3 volumes. Thomas and Robert Baskets released and 1756 which were known for their tea comparative freedom from misprints.

In 1762, Dr. Paris of Trinity College,1 substantially revised edition of the KA lowed by Dr. Blayney’s revision of 171 Version in use today is largely the elitism the efforts of these two scholars in rev-i4 and the marginal notes.

From the time it replaced the Geneva Bible as the most widely used English translation until about 1988, the King James Version maintained its place as the best selling English version. More than 100 English translations have been made since 1611 (not counting the revisions of the KJV), but none of them replaced the Authorized Version as the most widely-used translation until the New International Version achieved that feat in 1988. No doubt the main reason the NIV has become so popular is its readability. More and more people in the twenty-first century find the Elizabethan English of the KJV difficult to understand in some places. In addition to its liberal use of “thee,” “thou,” and “ye,” and “eth” and “est” verb endings, the KJV contains such archaic words as “neesings,” “leesing,” “whimples,” “knops,” “wot,” “blains,” “concupiscence,” “emerods,” “greaves,” “helve,” “kine,” “ouches,” and many more. Another factor in making the KJV difficult to understand for some is that the rules of grammar have changed since 1611. Failure to know where this has happened could actually cause a person to misinterpret a Scripture.

Instructions: Complete the following progress evaluation without looking at the chapter. Then check your answers.

Similar typographical errors continue to occur in various printings of the Bible. One recent edition of the Thompson Chain Reference Bible reads that Jesus was “laid in a manger?’ instead of a “manger” and refers to the “throne” of God rather than the “throne” of God in Revelation.

This article “How the Bible Was Translated” by Daniel L. Segraves was excerpted from: You Can Understand the Bible. It may be used for study & research purposes only.

1 thought on “How the Bible Was Translated (Entire Article)”