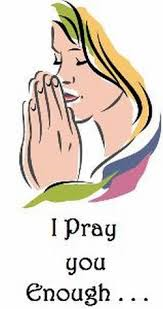 Two things have I required of thee; deny me them not before I die: 8Remove far from me vanity and lies: give me neither poverty nor riches; feed me with food convenient for me: 9Lest I be full, and deny thee, and say, Who is the LORD? or lest I be poor, and steal, and take the name of my God in vain.

I regret that I do not know to whom I should give credit for the following story that I either heard or read but I shall try to relate it as I remember it.

There was a lady sitting in an airport terminal, waiting for a flight, when the departure time came for two other ladies who were waiting for a different flight. As one of them started to board the flight, the other said to her, “I pray you enough.” The other lady replied with a similar entreaty. After her friend (mother?) had boarded the plane, the third lady who had witnessed this interaction, felt that she just had to know the meaning of the consoling benediction that had passed between the two.

She excused herself to the stranger and asked an explanation for the blessing that she had just witnessed. The response was;

“It is a custom in my family that when we are parting and going separate ways that we always say, ‘I pray you enough.’ In other words, I pray that God will give you exactly what you need to keep you in His way. It is our desire that God will give us neither poverty nor riches; that is, to the extent that it will be a detriment to our souls’ wellbeing. We never know if we will see each other again in this life and it is the eternal that is so vital to our consideration because it is certain that we will spend eternity with God or in Hell. This simple prayer gives us pause for reflection; not to become so preoccupied with this world’s goods that we loose sight of eternity.”

Everyone living in the United States of America who is reading this article is part of the richest two percent of the entire population of the world. While this journal is read by people from other countries and continents, relatively speaking, the poor people in the USA are richer than most of the people in the world. Yet, this blessing that passed between the two women in not about money. It is about a spiritual blessing, or, to be more precise, a spiritual warfare.

Having too much money can be dangerous, but so can having too little money. Being poor can, in fact, be hazardous to spiritual as well as well as physical health. I recently read a book titled, Mountains Beyond Mountains by (and about) Dr. Paul Farmer. Dr. Farmer began a medical program in the interior of Haiti, reaching out to the poorest of the poor, treating them for T.B. He had to not only provide the medical expertise, but he had to furnish the medicines and to make sure that the patients took their medicines. To do this, he often walked for miles, away from the small villages and into the mountains, to some poor family’s hut, just to treat one man who otherwise would have died of T.B. What was, for me, one of Dr. Farmer’s greatest revelations, was not just the constant need for food, but the good that could be accomplished health wise by a small amount of additional nutrition to a sick person. He said that if at all possible, he would try to give that family an extra $5.00 per month for additional food because he felt it was a waste of time to treat the physical affliction if there was not adequate nutrition for the body to heal itself. That is, $5.00 for a family to supplement their food budget for a month. (Think about that the next time you drive through McDonald’s and hand your money to the person on the other side of the window.) Even as I write this, I am floundering for words to try to put this in a proper perspective.

Nehemiah 8:10; …Go your way, eat the fat, and drink the sweet, and send portions unto them for whom nothing is prepared:

I am aware that Nehemiah 8:10 was not written about or for missionary work. Yet the spiritual parallel is adequate justification to incorporate its use to illustrate that poverty is a physical battle as well as a spiritual.

Who Then Can be Saved?

Riches, on the other hand, do not guarantee happiness (nor salvation). Jesus gave further insight to the dilemma of riches in Matthew 19:23-25. Then said Jesus unto his disciples, Verily I say unto you, That a rich man shall hardly enter into the kingdom of heaven. 24And again I say unto you, It is easier for a camel to go through the eye of a needle, than for a rich man to enter into the kingdom of God. 25When his disciples heard it, they were exceedingly amazed, saying, Who then can be saved? 26But Jesus beheld them, and said unto them, With men this is impossible; but with God all things are possible. The disciples questioned Jesus, Who then can be saved? Jesus responded that; With men this is impossible. With men, rich or poor, salvation is impossible. When Jesus used the clause, With men, it is all inclusive, both rich and poor.

Mark 4:19 categorizes the cares of this world, and the deceitfulness of riches, and the lusts of other things as being things that will choke the word as if it was sown among thorns. Verse 18. He goes on in chapter 10 to tell of a rich young man who wanted to follow Jesus. How much better he would have been if someone had just gave him the benediction, I Pray You Enough! He found Jesus’ injunction, one thing thou lackest, to be more than he could accommodate and he went away grieved for he had great possessions. Verse 22.

Mark tells us in verse 21 that Jesus beholding him loved him. As the young man walked away`; grieved because he could not obey what Jesus had commanded him to do, …Jesus looked round about and saith unto his disciples, How hardly shall they that have riches enter into the kingdom of God. And the disciples were astonished at his words. But Jesus answereth again, and saith unto them, Children, how hard is it for them that trust in riches enter into the kingdom of God! It is not possessing riches that will send a man to hell but it is trusting in riches that will send you to hell! Jesus gives a more poignant clarification in His address to his disciples in Luke 12:16-21. He told of a ‘fool’ who, because he had had a bumper crop, was going to pull down his barns and build greater barns, not knowing that that very evening, the death angel was coming to take him out of this world. The problem was not necessarily the bountiful crop that his servants harvested, but it was his lack of a relationship with God that caused his downfall. Luke 12:21; So is he that layeth up treasure for himself, and is not rich toward God. How much better it would have been if he had had one true friend who would have blessed him with this simple prayer: I pray you enough!

Neither Poverty Nor Riches

Let your conversation be without covetousness; and be content with such things as ye have: for he hath said, I will never leave thee, nor forsake thee. Hebrews 13:5. I do not believe that God wants us to live without hopes and aspirations; without dreams and desires for better things. None of us want our children and grandchildren to have less than what we have after a lifetime of work and toil. We want them to do better, to have more, to make more money than we did. But not at the expense of their souls. Gain is not godliness; godliness with contentment is great gain. Notice that the word godliness is spelled with a small ‘g’. Godliness is the act of living a devoted life. It the ongoing process of obedience to and love for God.

It is He who supplied everything that we have. But my God shall supply all your need according to his riches in glory by Christ Jesus. Philippians 4:19. But with every blessing there is a corresponding responsibility. Jesus told his disciples in Matthew 26:11; For ye have the poor always with you. (Perhaps you should be more careful what you say the next time you see that homeless person standing on a street corner holding a sign that says, “Will work for food.”) Poverty is a Biblical reality. But to those who have been blessed with more of the material things of this world, take heed to the charge that Paul gave to Timothy in 1 Timothy 6:17-10. Charge them that are rich in this world, that they be not high-minded, nor trust in uncertain riches, but in the living God, who giveth us richly all things to enjoy; 18That they do good, that they be rich in good works, ready to distribute, willing to communicate; 19Laying up in store for themselves a good foundation against the time to come, that they may lay hold on eternal life. Paul is clear in his teaching that God gives to us richly all things to enjoy but with that blessing one has to do good and to be ready to distribute to those who have less than you have. It is teaching here that by doing good to others, we are laying our own foundation and we will be able to lay hold on eternal life.

Romans 15:26 teaches us that there were poor saints in Jerusalem. This would have been toward the end of Paul’s ministry. He knew both how to abound and to be abased. Consequently, our condition of riches or poverty is not necessarily based on how much money we have. While we put the emphasis on the word, poor, God puts the emphasis on the word, saints. That is more that enough.

I Pray You Enough.

The above article, “I Pray You Enough,” is written by Henry Mobley. The article was excerpted from Apostolic Standard magazine.