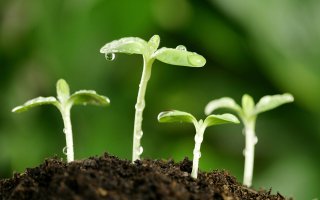 Winning souls is much like farming. the farmer does not sow his seed one day and expect to reap a crop the next. Several steps are involved in the process of bringing his crop to fruition. He understands he must plow, cultivate, plant water, fertilize, etc. “Behold the husbandmen waiteth for precious fruit of the earth, and hath long patience for it, until he receive the early and latter rain.” (James 5:7) In the parable of the sower, Jesus said that the good soil represented “they, which… bring forth fruit with patience.” (Luke 8:15).

“He that winneth souls is wise” (Proverbs 11:30). One area where he manifests his wisdom is in his patience. This is not always easy for the pastor or saint who has a burden for his city – his family, friends, workmates, schoolmates, and neighbors. I know that most of you desire to influence people for good wherever you go – but sometimes, like me, you think, “What’s the use? It doesn’t seem like I am getting anywhere. I don’t seem to be making a difference.” Never yield to that feeling. Never give up on the harvest! Keep on plowing. Keep on sowing. Keep on watering. The harvest is coming! “Be not deceived… whatsoever a man soweth, that shall he also reap… let us not be weary in well doing: for in due season we shall reap, if we faint not.” (Galatians 6:7,9).

I find encouragement in the words of Ecclesiastes 11. “Cast your bread upon the waters; for thou shalt find it after many days. Give a portion to seven, and also to eight… In the morning sow thy seed, and in the evening withhold not thine hand: for thou knowest not whether shall prosper, either this or that, or whether they both shall be alike good.” (Verses 1-2,6). Like the farmer, we cannot control all of the circumstances that may affect the harvest. Some of the sown seed will prosper and bring forth a crop. Other seed may fail to produce for any number of reasons – poor soil, foul weather, pests, or disease. But that is not for us to decide. Our calling and duty is but to sow the seed and to do our best to protect it and nourish it. That is all we can do. The rest we must leave to the Lord of the harvest. However, one thing is certain – if we fail to do our part in the process, there will be no crop whatsoever at harvestime. “The sluggard will not plow by reason of the cold; therefore shall he beg in harvest, and have nothing.” (Proverbs 20:4)

I love the story of Elijah’s praying for rain. God gave him a promise in the time of draught – “Go, shew theyself into Ahab; and I will send rain upon the earth.” (I Kings 18:1) It had not rained in over three years. There wasn’t a cloud in the sky. The likelihood of rain was minimal. Yet, Elijah had a promise from God that he took to Carmel. He confessed to hearing a “sound of abundance of rain” when as yet there wasn’t a hint of rain. Nevertheless, he took God’s promise and cast himself down upon the earth and prayed earnestly with “his face between his knees.” It is my belief that he prayed until he felt sure that the storm was imminent. He thus sent his messenger to look toward the sea for any sign of the coming deluge. The servant reported back, “There is nothing.” I think Elijah was surprised. He had anticipated that his earnest prayer founded on God’s promise would bring immediate results – but not so. Still, he did not allow himself to be weary in his well doing. He knew what God had promised. So back to prayer he went. In time, he broke through and felt once again that the outpouring was at hand. To his disappointment, his servant reported back once again, saying, “Still nothing.”

We do not know precisely how that God’s plan will unfold. “It is not for you to know the times or the seasons, which the Father hath put in His own power.” (Acts 1:7) But we must ever recognize that we are still a vital part of the process. “For we are labourers together with God: ye are Gog’s husbandry… I have planted, Appollos watered; but God gave the increase.” (I Corinthians 3:9,6) We may never know exactly when the harvest will come – still we must faithfully continue to plow and plant and nourish and water the crop. Elijah never wearied in his well doing. Finally after his seventh season of earnest prayer, the servant’s report was, “Behold, there ariseth a little cloud out of the sea, like a man’s hand.” A short while later, “the heaven was black with clouds and wind, and there was a great rain.” Elijah’s patience in consistently doing the will of God had, at last, paid off.

Like all of you, I have had times when I have earnestly and consistently sought the Lord until I felt certain that a great outpouring was imminent – only to be sorely disappointed. And then, in due season, in His time, our faithful God has come through. this past Sunday, for instance, was just such a time. Eight adults were baptized. Some had already received the Holy Ghost – others received His Spirit in the water. It was harvestime! It felt good just to have been part of the process.

Keep it up, soulwinner! Keep casting your bread upon the waters. Give a portion to seven and also to eight. Sow your seed in the morning. Do God’s work in the evening. You may never know exactly what God will use, what will prosper and what won’t. Just be glad to be laboring together with Him in the greatest of all works. Just be thankful to be a part of His soulwinning process. Never grow weary! Never give up! God is faithful! Harvest is coming! In due season, you shall reap! “They that show in tears shall reap in joy. He that goeth forth and weepeth, bearing precious seed, shall doubtless come again with rejoicing, bringing his sheaves with him.” (Psalm 126:5-6)